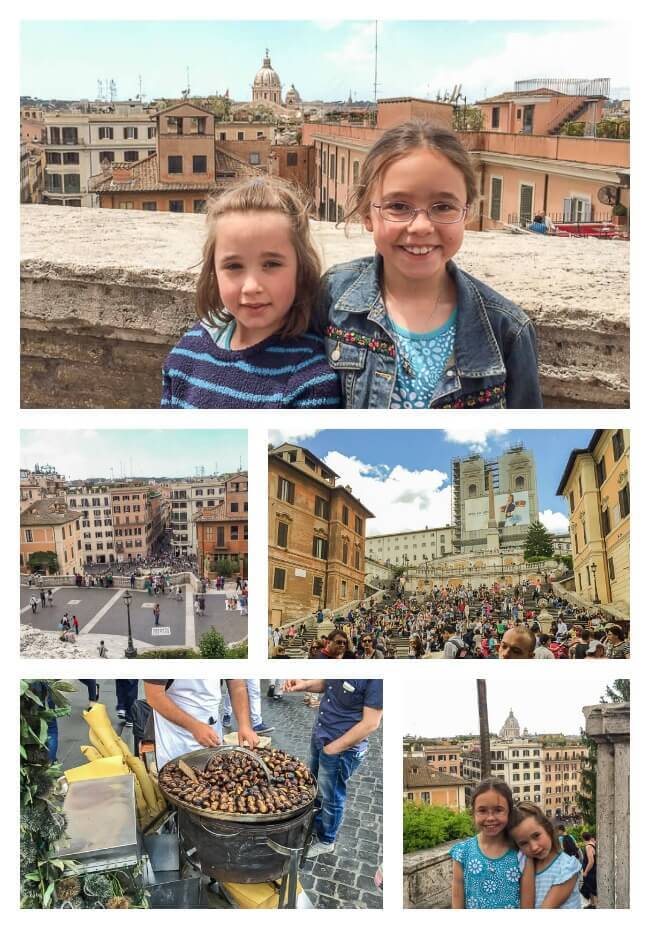 I don’t expect to have 1 post per day or half day for most of this trip, but Rome was like that. Just packing as much in as we could. We are coming back to Rome at the end of the trip, and then we will be more organized, because we have purchased the Roma Pass and plan to hit Vatican City, the Coliseum, hopefully Palatine Hill and the Roman Forum. So for now we just kind of picked a spot, went there and then walked! We decided to hit the Spanish Steps first. This is where I learned what crowds of tourists really means.

Weirdly, it is also where I tried chestnuts for the first time (yum!)! I can certainly see how the Steps would be gorgeous, but honestly the place was crawling with so many tourists it was a little difficult to appreciate. Nonetheless we hiked to the top, snapped pics of the kids, and hiked back down. I did some research (read: frantic googling) during the hike and discovered a restaurant nearby that specialized in the cooking of Lazio, the region that Rome is situated within. This, along with a stellar review, was enough to entice us so we headed off to Palatium. 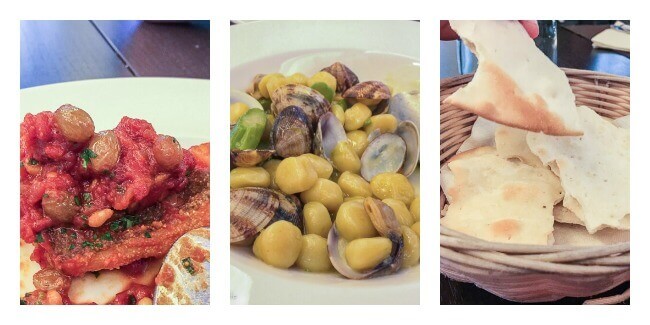 The pictures above show my favorites of what we ate there. All in all John and I both feel that it is the best meal we have had in Italy so far (not counting little bites on the food tour). The dish on the far left was a fried baccala (cod) with tomatoes and sultana raisins. This was John’s favorite dish–it was worthy of being my favorite, but it reminded me a lot of how I cook, so it was not the revelation that the gnocchetti (mini gnocchi) with asparagus and clams was. This dish was amazing. The kids tried to argue against ordering it (being kids, they tried to veer toward the familiar), and then I had to fight them off for my share! The asparagus was tender and delicious, the gnocchetti buttery without being bland, and it even had a bit of a kick, I suspect from ground white pepper. Alex especially was entranced by the clams. The last “dish” was a flatbread that they served us while waiting. On the surface it looks like the rustic Italian version of a Saltine cracker, but it was far superior. I honestly suspect this was due to using a quality sea salt.

I should add I was too busy stuffing my face to get photos of the desserts, which were also lovely. And the meal was timed perfectly because a fierce but short-lived rainstorm passed through while we ate. 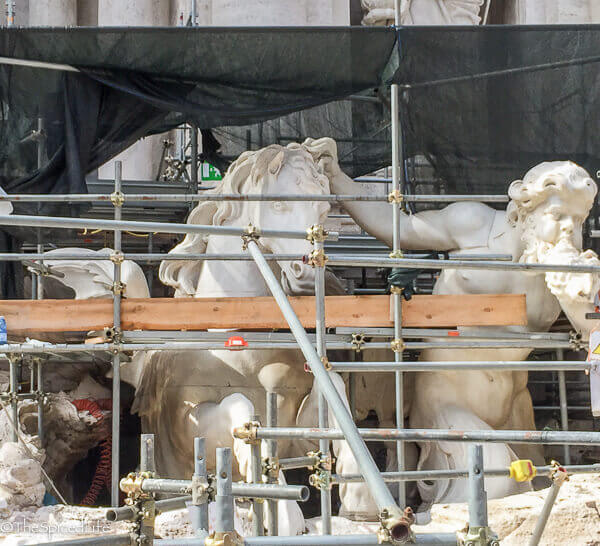 After eating, we decided we had heard of the Trevi Fountain so we might as well wander over and see it. Sadly, it was under serious construction (and if anything, even more crowded than the Spanish Steps!). The good news though was that, as compensation, they had a bridge stretched across where the water would have been, much closer to the sculptures, so you could walk along the bridge and at least see everything closer up. So that was fun. Amusingly, I have peeked at a few of Sammy’s postcards and she keeps referring to it as a lake. I guess without the fountain running it was hard for her to get a sense that it was a fountain!

After a break for cappuccino and a cannolo (I tell you, I have become obsessed!), we wandered toward the Pantheon, but first happened upon the Temple of Hadrian. A “soldier” was there, hoping to earn tips by acting his role with the tourists. He did an amazing job–he earned every euro he got from us. He had me in stitches! The girls were torn between mortification and hilarity–I am pretty sure when he added John and me into the scene, hilarity won. 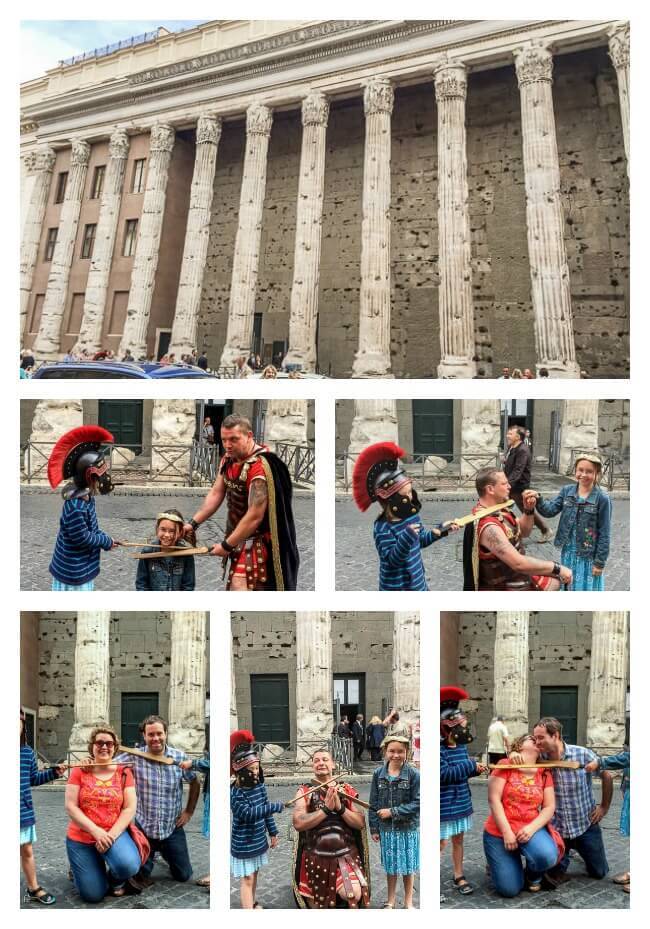 After that we followed signs for the Pantheon. The Pantheon turned out to be quite a surprise for me–yet another instance where I should have done more research. When you come upon the Pantheon, it is one of the most monumentally impressive things you have ever seen. And it is intact. Now if you had asked me what the Pantheon was I would have said some ancient Roman building. Which is true–it was a temple. But it is special because in the 7th century it was converted to a church, thereby ensuring it would be preserved (I am not at all clear that that is why they did it, but that was the wonderful side effect). However, this creates a conflict in a tourist like me. It really is that impressive, and I could stare at it for a while. But (for me anyway) you go in imagining ancient Romans and gods and goddesses and are whacked over the head with Christian iconography and requests for respectful silence. 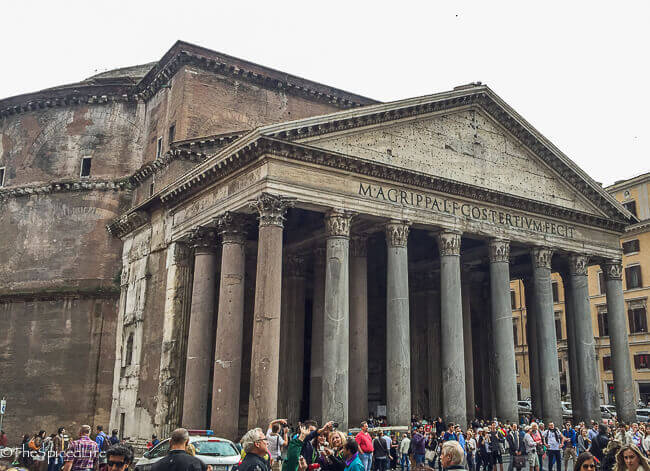 I truly do not mean to sound disrespectful. But it was a little disconcerting. But then you remind yourself that is why this amazing building (the largest concrete building in the world until the 20th century) is still intact and in good repair. And the inside is inspiring–the ceiling is just amazingly high, it is impossible to conceive how it was built without forklifts! The Pantheon is also where it forcibly struck me that I had done a disservice to Sammy by not researching which churches were best for art viewing (Sammy is my fellow art museum lover). We looked very carefully at all the paintings; what had the biggest impression though was Raphael’s tomb. The idea that a dead body (however decomposed) was inside the building next to her just blew Sammy’s mind.

The concept of church as art museum inspired our next stop, San Luigi dei Francesi. We happened to wander by and the door was open so I wanted to go in. This is where I discovered Sammy and I share a love for wandering in the great cathedrals of Europe–and John and Alex do not so much. I lit a few candles–I have lit candles for my Catholic grandmother in Europe for as long as I have been visiting Europe, and I lit one for my great aunt this time too. This church turned out to be a fortuitous one for an art lover to stop in; built in dedication to (among others) the French king of the time, several of Caravaggio’s masterpieces are in this cathedral–and the building itself is stunning from the inside. Sammy and I spent most of our time very quietly comparing and contrasting the use of light in the different paintings–the rather heavy religious themes were not worth attempting to get into! 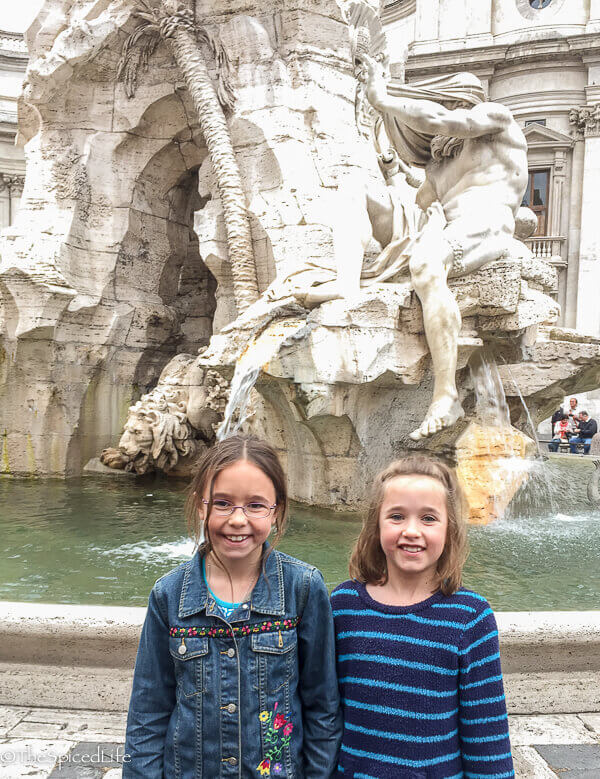 Our next goal (remember–piazza to piazza!) was the Piazza Navona, but it started raining (Rome was so much colder than I expected!) and we could tell the kids were petering out. So we snapped a few photos under the River Nile God of the Fontana dei Quattro Fiumi (Fountain of the Four Rivers) and called it a day. Our 2 day total, according to John’s FitBit, was 8 miles walked. I think our kids did pretty well, but we were undoubtedly ready for the slower pace of the south. Stay tuned for more stories–which I will have as soon as I rent a car!