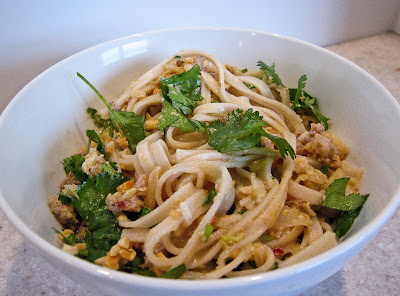 It probably seems like I’ve gone Asian noodle crazy. Sometimes I think food replaced school for me–where once I would have been interested in learning the history of every culture/nation out there (I was a history major and loved it), now I seem determined to conquer all of their cooking. My current interest–along with Mediterranean and Middle Eastern cuisines–is Asian noodles. Probably because I acquired Corrine Trang’s Noodles Every Day–yes it is as simple as that. 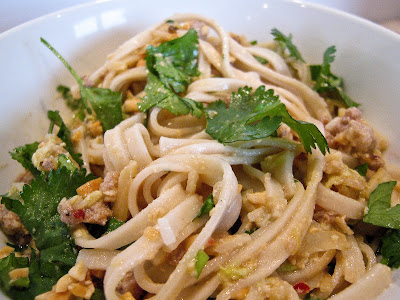 Anyway, I was especially interested in this dish because all of its flavors appealed to me but I was frightened by the cabbage. But then I made that Cambodian curry and realized how much I liked the wilted Napa cabbage in it. Now cabbage is a weird thing, because my 2 I-won’t-touch-these-even-if-invited-to-dinner-at-Bono’s-house foods are bananas and cooked cabbage. But apparently it is is either the Eastern European methods of cooking cabbage that bother me or it is the other varieties of cabbage (green, red) that bother me, because I like Napa cabbage cooked in Asian dishes just fine. Who’da thunk? 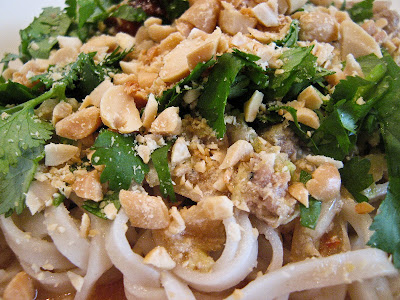 This is an especially exciting discovery because cabbage is one of those uber-healthy miracle foods and it adds another veggie that I like to eat cooked to my repertoire. Speaking of health, this dish could be made super healthy I think. For the first time I made it using what I had available, which means I used a salt and pepper pork sausage that needed to be eaten from my freezer and store bought chicken stock. This added more fat and sodium to my dish than really needed to be there. Next time I would try half pork and half turkey and I would try to have homemade un-salted stock on hand, because if there is one thing a dish with miso and soy sauce does not need it is additional salt. You could also try a whole wheat spaghetti noodle in it, for a super healthy meal. Having said all that, we loved this dish, and I would cheerfully repeat it in either its more or less healthy guises. 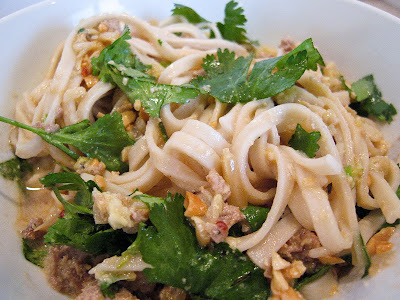 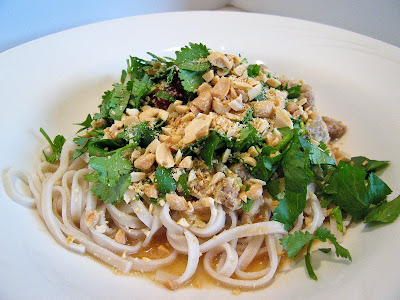 Whisk together the first 6 ingredients. Set aside.

Heat a large wok or saucepan over high heat. Add the oil and when it is hot add the ginger, shallots and garlic. Stir fry until until they are golden and fragrant, about 3-5 minutes. Add the pork and break it up, stirring it as it fries. When it has lost most of its pink, add the cabbage and cook an additional 3 minutes, until the pork is cooked through and the cabbage is wilted and cooking. Add the stock and soy sauce.

The sauce for this dish is fairly brothy. if you think that will bother you, let the sauce boil off for about 3-5 minutes at this point. Otherwise just bring to a boil and then turn off the heat. Immediately add the whisked together paste. Stir until it has been evenly absorbed into the sauce. Taste for additional sugar. Serve by ladling over the noodles in bowls and then sprinkling with cilantro, peanuts and scallions–be very generous with the cilantro and peanuts. You can also garnish with additional Sambal Oelek or chili garlic sauce if some people like theirs spicier (what we did). 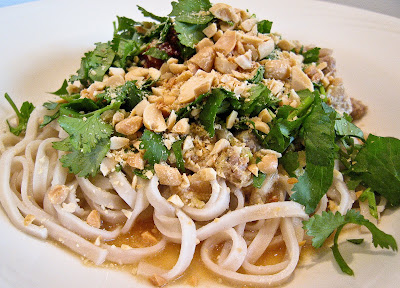