You are here: Home / reviews / cookbooks / Top 11 Foodie Recommendations from The Spiced Life for 2011 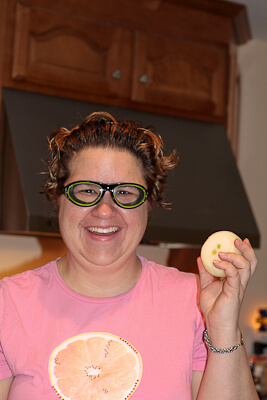 My favorite stocking stuffer this year–onion goggles!  No more tears!  Who cares if I look ridiculous?!

Happy New Year!  I love end of year lists.  Best cookbooks, best blogs, best albums, etc…  What it is about ranking and picking favorites that attracts us so much I am not sure, other than it is a great launching point from which to get new ideas if your regular sources have dried up.  Case in point: I am a big music fan.  Always have been and expect to always be so.  But I live under a rock.  I don’t like the radio–never have, hate commercials plus I am a control freak.  I am a stay at home mom of young children, which eliminates plenty of other traditional ways to hear about new music.  For whatever reason, as far as I can tell the other moms I know are not into following current music trends–or at least not telling me if they do!  So every December I hit the “best of” lists and start purchasing music.  Currently I am obsessing on ADELE and Florence and the Machine.  I also bought The Decembrists and Fleet Foxes, along with Lady Gaga’s newest album (sometimes despite being aware of and liking a singer I can be totally oblivious to the fact that they have released a new album!).  Feel free to suggest other bands to check out!

So anyway, I started wondering why I don’t do one, only foodie related not music.  Well, I can tell you now that I have they do take some work.  I had to stare at my bookshelves, contemplate why I liked what I liked and, most important, try to remember just what the heck I was doing at the beginning of 2011.  I decided not to limit myself to books–I have so many and cook from such a variety that limiting it to books just made me gnash my teeth.  I also tried to limit it by my enthusiasm rather than just how used any given site or book was–as a result some books made the list where I have not yet made a recipe from them!

Without further ado, I present to you the no limits, purely my own random thoughts Top 11 Foodie Recommendations from The Spiced Life from 2011:

*Bonus Pick: I recently came across a tiny book by Michael Turback in my used bookstore, Hot Chocolate

, that I am really looking forward to exploring this winter!  From dark to milk to white to boozed up, spiced up or minty, this little book has tons of ideas for making hot chocolate more exciting.

Before I forget, I keep forgetting to announce the winner of the Be A Good Cookie OXO spatula!  What can I say, it might be I get a little distracted this time of year!  Joanie from the CLBB please shoot me an email with your email address so I can get your information!

I hope I have given you some ideas to explore in the upcoming months, and I wish you a happy, healthy and prosperous 2012.

Amazon affiliate links were used in this post, but only to link to items I would be discussing and linking to anyway.