You are here: Home / beef / The Food of Oman Reviewed: Harees (Savory Beef and Wheat Porridge)

Harees (Savory Beef and Wheat Porridge) with caramelized onions and mushrooms is savory and warming, a delicious antidote to chilly nights or bad days. The Food of Oman was sent to me by the publisher in exchange for an honest review. Affiliate links have been used to link to items I am discussing. 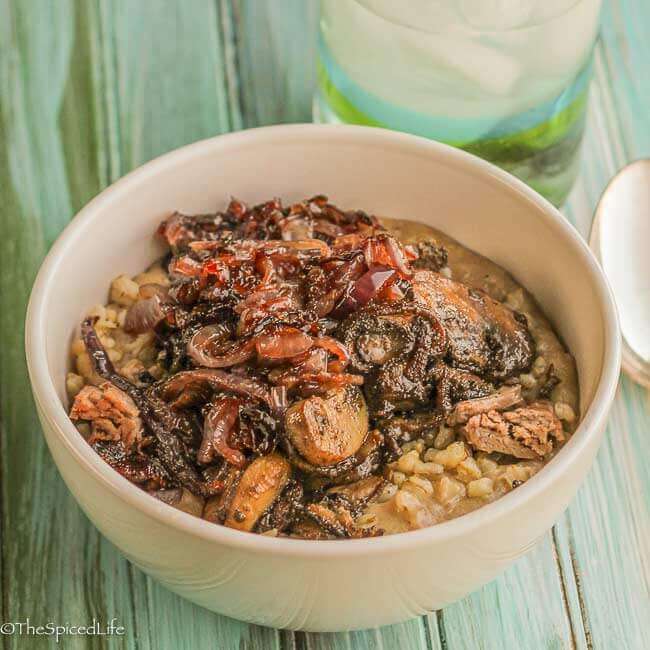 OK I will be the first to admit that this dish is pretty outside my wheelhouse. Not the Omani cuisine or the succulent beef, but the porridge aspect. Call it a quirk, but when I discover a new cuisine I often want to try the dish I can least imagine. The one that would broaden our horizons the most. It probably drives my kids nuts. But they are good sports about it, and I think it is good for us.

So anyone who knows us, knows we like our oatmeal chewy. Like really chewy. No porridge here. Or polenta. Or creamy oatmeal. So what drew me to this meal? Two things: the idea that the meat had cooked down into the porridge and the fact that it was pretty different from any food I had imagined as “Middle Eastern.” However, knowing our preferences, I decided to remove some of the beef and wheat earlier in the cooking process, and serve them on top with the caramelized onions and mushrooms.

The verdict? Delicious. Probably not a repeater as written exactly, just because I would be more likely to braise the beef for a shorter time and serve it on less cooked chewy pearled whole wheat. But the flavors were amazing, rich, warm and comforting. 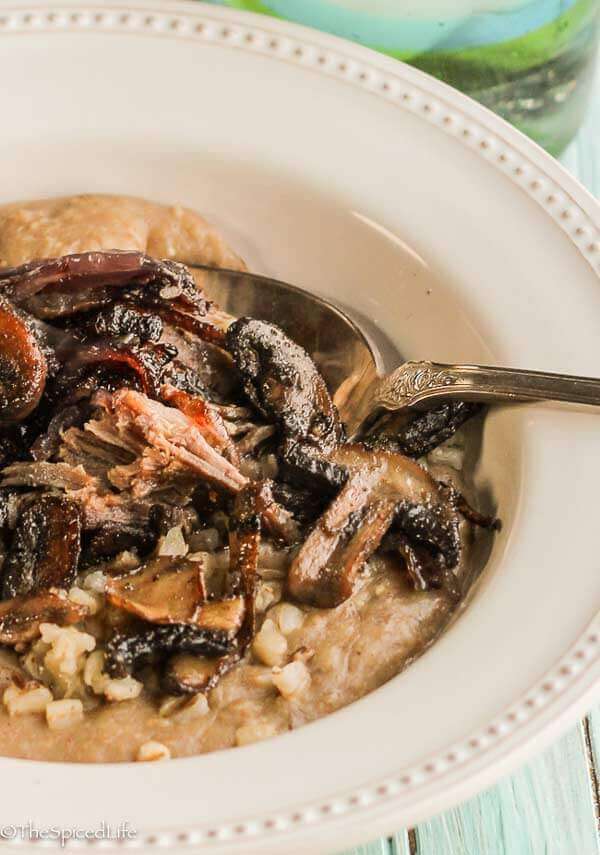 I made this dish pretty much according to recipe, except I added the mushrooms. I did a little digging, and mushrooms are not unheard of in the Middle East. One of the things that Felicia Campbell emphasizes throughout The Food of Oman: Recipes and Stories from the Gateway to Arabia

is make it to taste! Every region and every family is different. She refers to Harees as Arabian Gulf “soul food,” so I figured if mushrooms are soul food to my family, then they belong! Plus they added more chew and are fantastic with beef. 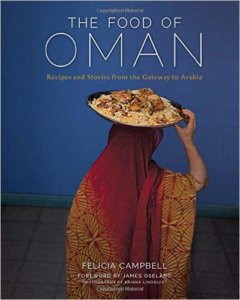 Now about The Food of Oman, the entire book. I am in love. Everything about it. See how it got top billing up there in the title? Forget about the dish (although don’t, not really), this book is amazing. First, the premise for how Felicia Campbell fell in love with the Middle East is an interesting story within itself–she fell in love while deployed in Iraq as a private in the United States army. Something about that just reaffirms my belief in humanity, that she could see through everything she was experiencing in Iraq to discovering that she loved the people there, and their culture and cuisine. So she came home to get a degree in food studies with a Middle Eastern focus.

Those studies led her to the Sultanate of Oman, which leads me to my next reason for loving The Food of Oman so much. Now before reading this book I could not have picked Oman out on a map. My world geography is deplorable, and the current state of the Middle East does not help, as the troubles in other areas drown out the more sane and attractive areas of that part of the world. So anyway, Oman. It is located in the far east of the Middle East, and on a map it is basically across from India. Its many important ports made it a crucial location on spice routes–which means its cuisine is more influenced by spices than other Middle Eastern locales.

That same crucial importance led to Oman being conquered by the Portuguese and then the Persians–but it also in turn meant that when Oman gained its independence it became a powerful empire in its own right (think 18th and 19th centuries), including parts of west India and east Africa. You can imagine the pitter pattering of my heart at this line in The Food of Oman: “The foods of Oman were a wonderfully bizarre mash-up of Bedouin rice and meat, South Asian curries, and East African vegetables spiked with coconut milk, hot chiles, and lime.” (p. xiv)

How did I not know this cuisine existed? I requested this book to review on a whim, based on the fact that I am always open to exploring new cuisines. And I discovered a potential obsession. The Food of Oman is amazing, and the Sultanate of Oman has moved to the top of my “must visit” list. In the meantime I will have to console myself with making everything in the book. Stay tuned! 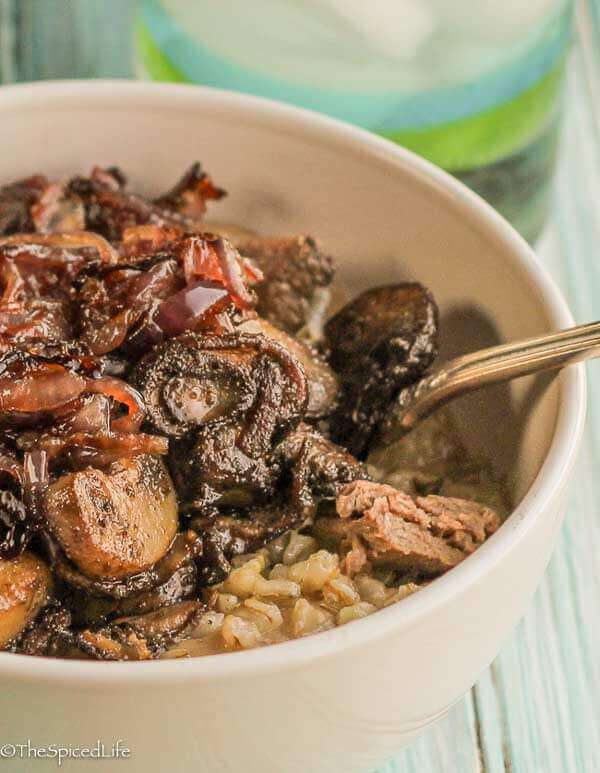 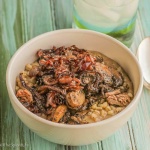 Print
Harees (Savory Beef and Wheat Porridge)
Adapted from Felicia Campbell. I made this recipe in the slow cooker, but you can also make it in the oven on a low heat, such as 250-275 F. Unlike chicken (which the dish can also be made with) beef will take a very long time to break down. Be sure to use pearled or shelled whole wheat berries. Campbell discusses topping the dish with either Omani Oil (cumin and coriander infused ghee) or cardamom infused ghee. I decided to incorporate both into the dish as well as incorporate the ghee drizzle into the onions and mushrooms. This dish must be started the night before you plan to serve it.
Course: Entree
Cuisine: Middle Eastern, Omani
Author: TheSpicedLife
Ingredients
Instructions

For the collage lovers….