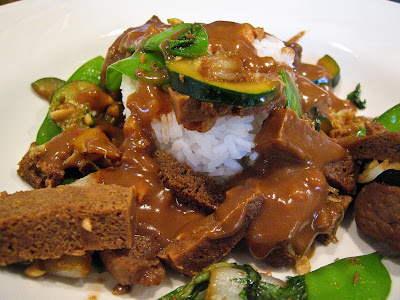 To think that 3 years ago this week the Cleveland Indians’ home opener was canceled for snow–as were the subsequent 3 games. Not this opening day– the Midwest is experiencing shockingly wonderful early April weather. The last week has seen more hot days than we had in all of July last year (I exaggerate but only by a bit), and hot days in spring can only mean one thing: exploring the creek. 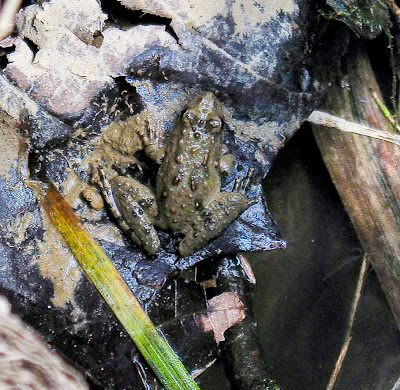 We have found tons of baby frogs this spring-we even found their “lair” (what do you call where frogs live anyway?) under the shelf of the bank on one side of the creek. This tiny guy–about 1/2 to 1/3 the size of my thumb–sat still, hoping to camouflage no doubt, long enough for me to take his picture. 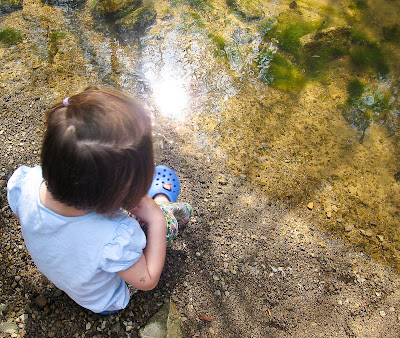 Sammy, contemplating getting her toes wet.

Spring is an especially fantastic time to explore the creek because it means the brush has not grown to unwieldiness, blocking most of our entrances down to the creek; the bugs have not come out in full force yet; and the animals that will mature to savvy, elusive creatures are still young and naive enough to be found. Although that last bit could also be because our fence was built last summer/fall, and so we have started going down to the creek without the dogs occasionally, much to their horror and dismay–which means the local wildlife has not run for the hills to the same extent. And a hot spring is even more splendid because it means that cold spring water that is rushing through the creek feels really good and clean. Unlike the stagnant trickle we get in August. 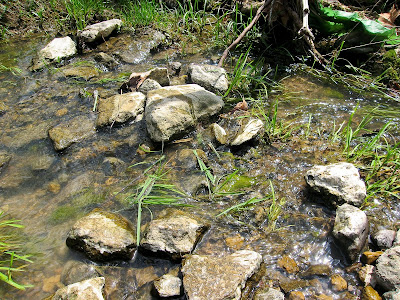 So if you are wondering where my baking has gone, now you know. Down to the creek. 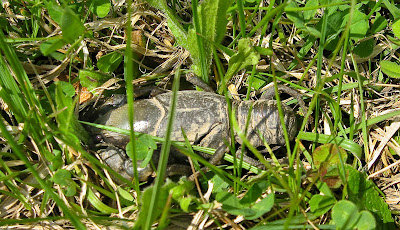 Crayfish (or crawdads) have been one of the big no-dog discoveries in our creek this year. While we have seen plenty in the creek, this is one we found wandering in the front yard and returned to the creek, which is why he looks so dusty and dry.

But we cannot go without dinner, so dinner there is. This is a good spring dinner–it is easy, it makes use of cheat ingredients like Thai curry paste, and it showcases some spring veggies nicely, like the cabbage and snow peas. Feel free to use whichever vegetables sound good to you–the original recipe did not call for cabbage for example, but I sliced some Napa cabbage up and threw it in and it was excellent. 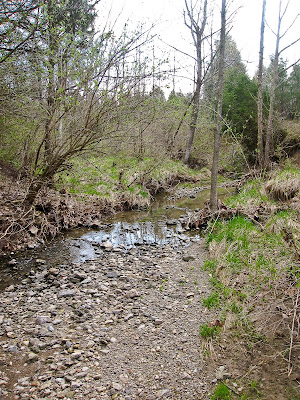 I got this recipe from a well-regarded cookbook called Rebar: Modern Food Cookbook, by Audrey Alsterberg and Wanda Urbanowicz. It is the accompanying cookbook to the also well regarded British Columbian vegetarian restaurant Rebar. Now in my world there are 2 different kinds of vegetarian food: food that is traditionally meant to be vegetarian, like a bean dish for Lent or an Indian dal. And then there is vegetarian food which is basically playing around with vegetarian versions of food that traditionally use meat or seafood. When using a cookbook for this latter kind of vegetarian food, I frequently sub meat and seafood back in, especially in the form of traditional impact ingredients, like fish sauce or lard. I am inspired by the non-traditional ways in which the cookbook authors play with ingredients, but see no reason to avoid ingredients I am perfectly happy to eat. In this case, I did add fish sauce back in, and I used pork and tofu, primarily because I did not have enough tofu.

Well, I promise I have no problem with tofu in other settings, but what was a robust marinade on the pork totally overwhelmed the tofu into a salty disaster (the tofu is pictured but I would leave it out next time and so I wrote the recipe for pork only). The cookbook did call for stock in the marinade, which I did not use; I am not sure if that was the problem or the fish sauce or what. So if you want to use tofu instead of pork, go for it but I do not recommend the marinade as I made it, for tofu. However it was terrific on the pork–what can I say, I am a meat eater and apparently my instinctive changes were meant for meat. 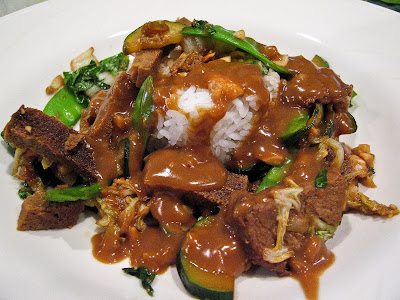 Marinade
*The marinade is very much to taste so quantities are approximate and taste as you go.

First make the marinade by whisking together all of the ingredients and then adding sugar to taste. You could also adjust the lime juice to taste. Toss it with the pork and marinade for at least 30 minutes, preferably several hours.

While prepping the ingredients for the stir fry, begin the Kaffir Peanut Sauce by placing the ginger, garlic, kaffir lime leaves and coconut milk in a small saucepan. Bring it to a boil and then cover it and turn the heat off. Let the flavors infuse while you prep everything else.

When everything is sliced and ready to be stir fried, return to the sauce. Turn the heat back on and whisk the lime juice, brown sugar, red curry paste, fish sauce, soy sauce and peanut butter into it. When it is smooth, taste for sugar and fish sauce (sweet and salty), keeping in mind that the marinade will also be salty. Set aside, covered.

Drain the marinade off of the pork, reserving the marinade. Heat a large wok or nonstick skillet over high heat. Add the oil and when it is hot, add the pork. Cook until it is browning and slightly pink in the middle still. Add the onions and zucchini and cook for another minute or 2, tossing. Add a few tablespoons of the reserved marinade, enough to coat the pork and veggies (discard the remaining marinade). Add the pepper and cabbage and cook, tossing, until the cabbage wilts down, 2 minutes or so. Next add the pea pods and cook for 1-2 minutes. When everything is cooked to desired doneness (I like my pea pods a little soft but still bright green, for example), turn the heat off and toss the chopped peanuts and basil in. Serve with jasmine rice and drizzled with the kaffir peanut sauce.