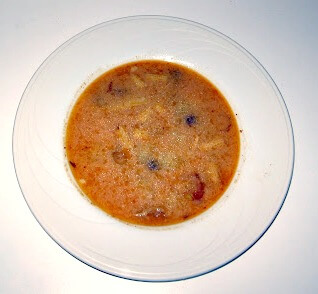 This conversation took place at our dinner table last night:

Me: Alex, in Thailand people don’t keep salt on the table. In Thailand, if you think your food is not salty enough, you put fish sauce on it.

Me and John together: That’s too bad, we LOVE fish sauce.

Me: You do? That’s wonderful. Do you want fish sauce for your dinner?

Alex: Yes I want to put fish sauce on my dinner. I LIKE fish sauce!

Toddlers.Go figure.And yes she did indeed shake some fish sauce onto 2 servings of our dinner last night and then again tonight on the leftovers.

My friends and family, and even those who know me from the CLBB, are probably surprised I have not had any Thai dishes on the blog previous to this.There are a couple of reasons for that.First, the Thai dishes we like best are coconut milk curries, which are not as healthy and are labor-intensive (I make the paste from scratch), so they tend to be special occasion meals, not regular occurrences.Second, I have found that of all cuisines out there it is hardest to remove the heat from Thai cuisine, and Alex’s toddler pickiness has taken the form of rejecting anything spicy.Because I realize that heat can be an acquired taste and because I know it genuinely produces a pain sensation, I am perfectly happy to not push the issue.I assume that it is a phase which will pass.

Last night’s dinner was born of 2 competing goals: to create a Thai soup that I liked and to use store-bought curry paste.As far as soups go, many of the Thai soups I have tried have a strong chicken broth element to them, which I am not a big fan of.The tom kha gai I have had, for example, borders on bland for me.It is just a taste preference—your simple is my bland.If I loved chicken noodle soup I would probably like tom kha gai, but brothy soups that taste strongly of broth are not my thing.The second part of the goal is kind of ironic—I learned to make curry paste before ever touching the commercial stuff and while I am strongly opposed to using it in my curries (more on why in a second), I think there must be great weeknight type applications for the stuff.Earlier this fall I used yellow commercial curry paste and made some great fried rice dishes.Now I am moving on to red curry paste.

For those who are curious, I am opposed to using store bought paste in curries because I don’t think it truly brings enough flavor to the dishes. Traditionally, Thai curries use large volumes of paste (translating to big flavor), which works if you make the paste yourself and control the heat. I don’t know too many Westerners who can use large volumes of store bought paste—it is just too hot. I have spoken to several people who have taken Thai cooking classes here in America where they have taught using canned curry paste—I think that is a shame. When I was in Thailand for my honeymoon, John and I took a cooking class in Chiang Mai where we pounded out paste the old fashioned way (in addition to making other dishes) and I thought it was a great experience. When I next make Thai curry I promise to tell you guys all about it.

But anyway, about this soup. I really hope if you like Thai food at all you give it a try. It was very easy, pretty flexible, and it should appeal to people who like the very rich Thai dishes as well as people who prefer the not so rich ones. It is kind of a happy medium. I suspect it could be converted to a semi-vegetarian soup (I only recommend leaving out the fish sauce and using soy sauce as a substitute if you are absolutely opposed to fish sauce and are used to eating Thai food made with soy sauce), using tofu and vegetable stock. It was a pantry dish for me, meaning that in an ideal world, there are other ingredients I would have liked to have used but I made do with what I had. I will try to give you some hints in that direction. However, I won’t lie to you, I have an extensive SE Asian pantry, so if you do not it could require a grocery trip. But it is worth it, I promise! This soup is a Laura Original, so I will do my best with measurements. Ultimately, as I have said elsewhere, it should be to your taste, not mine, so don’t hesitate to fiddle.

My number one rule when using store bought curry paste is to boost the flavor if at all possible. It helps to have made the pastes yourself when doing this as it gives you an idea of what ingredients you might add yourself. In the case of red curry paste, I like to add fresh (frozen is fine too) lemongrass, galangal and kaffir lime leaves, although I was out of galangal and so only used the lemongrass and kaffir lime leaf in this case (by all means use all 3 if you can though). My number 2 rule is to buy a good brand—usually Mae Ploy sold in plastic (not tin) tubs with no preservatives added. If tin is all you can get, it is ok, but much like with stock and other “canned” goods, it is better if you can avoid that tinny taste. Plus, the process of canning exposes the paste to much higher heat levels, degrading the flavor more than what occurs in the plastic tub “canning” process. 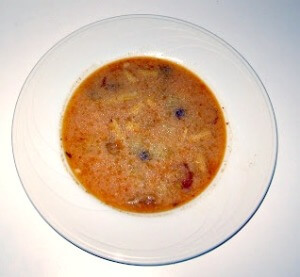 Since I did not want this meal to turn into a curry, I did not want to use loads of coconut milk. However, I did want something to boost the flavor of the soup, detract from the chicken broth as it were (which is ironic since I used an outstanding homemade chicken stock, but I just prefer chicken stock in a supporting role). So I diced orange sweet potato and simmered it in the chicken stock, and then pureed that, giving me several cups of a very thin sweet potato puree to add to the soup. It was an excellent decision. I had originally planned to use butternut squash but we did not have any, but I suspect it would work equally well.

One last note on the grapes: many people are surprised by my use of red grapes in Thai curries—pleasantly surprised if they are eating the curry, just surprised if they are reading about it. When we were in Thailand, red grapes were in almost all of the duck red curries we tried. The flavor is outstanding; it has nearly ruined restaurant red curry for me in the States. So I strongly encourage you to not leave out this ingredient.

*This recipe makes a lot. Halving it would be a pain (but not impossible) because of the coconut milk. It will last us (2 adults and 2 toddlers) 3 nights–and we will love every night of it! It just gets better each night. I am pretty sure it would freeze ok if leftovers are not your thing.

shredded chicken from one rotisserie chicken (which could then be used to make the stock, which is what I did)

1 19 oz can coconut milk (I use Mae Ploy; using a 14 oz can would probably be ok if that is all you have, use a little less stock)

1 small pineapple, cored and diced (canned is a more than acceptable substitute and is what I used)

one sweet onion, sliced into wedges (I used pearl onions I needed to use up)

Several handfuls of red seedless grapes, sliced in half if large

1 can of baby corn, drained, rinsed and cut into short segments (optional)

1 small box of grape tomatoes, sliced in half if large (optional, I did not have but would use them)

1 good handful of Thai basil leaves, whole (I did not have but would also use)

35 grams (1 1/2 T) of store bought red curry paste, preferably from a plastic tub, like Mae Ploy (this produced a mildly spicy soup, I would have used 50 grams had I not been making it for the kids; do keep in mind different brands have different heat levels—you just need to experiment and find what is right for you)

In a small sauce pan, bring the sweet potato and 3 cups chicken stock to a boil. Cover and simmer until the sweet potato is tender, about 10 minutes. Blend, using an immersion blender or the blender, to a fine puree. Set aside.

Prepare the lemongrass by peeling them and slicing the lower, white halves into 3 equal pieces for a total of 9 pieces. Peel and slice the galangal into thick rounds. Fold the kaffir lime leaf in half and rip out the stem/vein. Rip the leaf into 4 pieces. (I leave these aromatics in my soup for the length of its existence, i.e., to flavor the leftovers, which just get more intense—but do be sure not to serve them to any guests!)

Heat a large stock pot or a dutch oven until hot but not scorching. Being careful to not shake the coconut milk, open the can rightside up (or however it has been stored) and remove the solid coconut fat from the top and place it into the heated pan. When it has separated (I wish I had taken a picture of this—when the fat separates from the coconut milk solids, you will see little bubbles of oil), add the curry paste and mix in. Fry until it separates again, creating little bright orange fat bubbles. Add the garlic and onion wedges and fry a few moments. Add the lemongrass, galangal and kaffir lime leaf. Then add the rest of the coconut milk, the sweet potato puree, and the remaining 8 cups of chicken stock. Add the pineapple, baby corn, and shredded chicken. Then add the sugar and fish sauce—start with the minimum (4 tablespoons) and increase to your taste. I recommend adding up to 6 T at the most and then letting it cook for a while, and then tasting and adding more if it needs it. The palm sugar may take a while to totally dissolve if you throw it in hard, and the fish sauce and sugar both need time to really meld with the other flavors of the soup. I believe strongly in tasting as you go and at the end, and making adjustments.Cover and let simmer (but not boil) for 45 minutes.Before serving add the grapes (and basil and tomatoes if using).

I served with jasmine rice but rice noodles would also work well. John and I ate it as soup with rice on the side but the girls ate it as rice with a sauce—this helps cut back on the heat of the dish. Both girls ate 2 servings so it was definitely not too spicy.