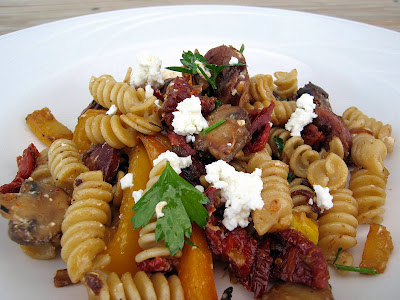 The past several weeks have been crazy. First, Alex had day camp for a week–her first time ever doing anything alone away from home–the same week I was baking for the pig roast. As far as I can remember I did not even cook after making that Thai curry, which lasted us a few nights. Then this week she is in swim lessons (and resisting strongly, unlike the day camp) and I just seem to have planned stuff up to my ears. 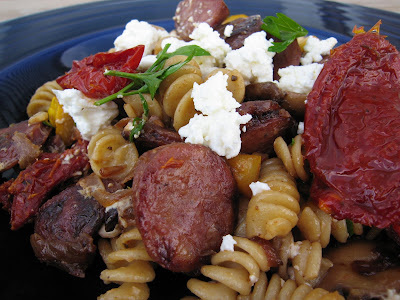 What, you ask, does this have to do with the price of tea in China? Nothing, except the dish I am about to share packs tons of flavor for very little effort. I made half of it after John got home for the night (I was waiting for the mushrooms and zucchini) which should tell you that this is a true 30 minute meal (which in my book means more like 45 minutes, including prep work). I made it on Monday, my first full day back from the excesses of the pig roast. 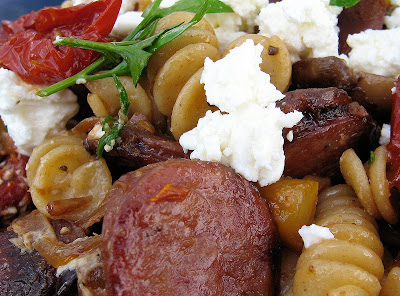 This dish is based around what we generically call the Pasta Toss. I got the idea from my sister, when we were both doing doing Weight Watchers and I was working and making fast meals when I got home. Everything in a pasta toss is interchangeable. Whatever sounds good, go with it. My few rules of thumb for us are: use a whole grain or otherwise high fiber pasta, use chicken sausage for maximum flavor with maximum healthiness, use some sort of crumbly high flavor low fat cheese, and use a lot of veggies in ratio to everything else. The recipe as written below lasted us 2 nights for 2 adults and 2 toddlers. 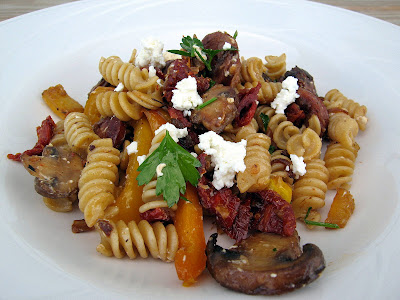 1 cup chopped re-hydrated sun-dried tomatoes (I used oil packed which had been rinsed and patted dry but you can also use dried that have soaked in hot water)
2 small onions, thinly sliced
1 T extra virgin olive oil
6-8 cloves garlic, minced
4 links mushroom sausage, sliced into thin rounds (any chicken sausage of choice, I used Aidell’s)
1 small container (10 oz? I forgot to look) sliced crimini mushrooms or other wild mushroom of choice
2 summer squashes, sliced or cubed (I sliced into rounds, and then cubed the part that was fat/fluffy and needed to be de-seeded)
1 1/2 sweet bell peppers, sliced
6 kalamata olives, pitted and chopped (more if you love olives)
French feta cheese 1/2-1 cup, to taste
1/4 cup chopped flat leaf (Italian) parsley
1 lbs rotini or other noodle of choice (I like Barilla Plus or Bionaturae)

When I was working, and therefore very short on time, I would pretty much cook everything but the pasta together and then toss with the cooked pasta. This method will work fine and only result in it being a little less flavorful–because the ingredients will steam rather than sear. This is how I did it this time:

Bring water to boil in a large pot and cook the noodles until al dente. Set aside.

Heat a large (12-14 inches) nonstick pan on medium high heat and add the sliced onions. After a minute, drizzle them with some (maybe 1 teaspoon) extra virgin olive oil. After they cook down and brown, maybe 10 minutes, add the garlic. Cook for 1 minute. Push the onions and garlic to the outer rim of the pan and add the sausage, with maybe 1/2 teaspoon of oil. Cook until browned and then mix with the onions and garlic, and then push this mixture to the edges. Add the mushrooms with the remaining oil to the center. Let them cook, stirring a little but not mixing with everything else until they have seared a bit and gotten some color. Mix everything together and again push to the edges. Add the zucchini and peppers and let them cook in the center–the idea is to cook everything in that very hot center to give it some color and also to allow the water in the veggies to cook out of the dish completely so it does not get too watery. After a few minutes, once again mix everything together and add the sun-dried tomatoes and chopped olives. Add 1/4 cup of crumbled feta to let it mix into the dish; save the rest for garnishing. Mix in the parsley. Serve with crumbled feta on top (we also added some extra sun-dried tomatoes because we were really loving them in this dish). 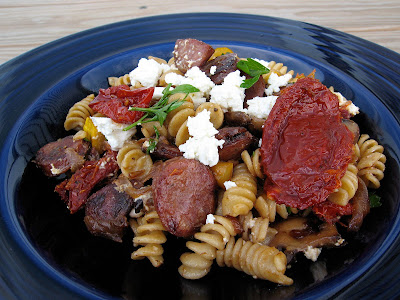