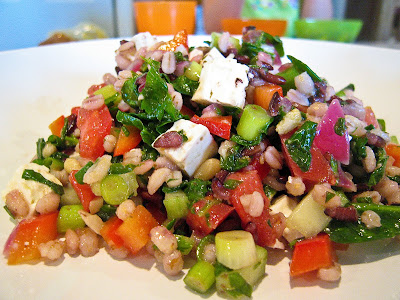 Summer is an occasionally frustrating time for me, because I love one pot meals. And let’s face it, most one pot meals do not really scream summer. Curries, stews, casseroles… these all heat the kitchen and are heavy in the tummy. Which is why I was completely fascinated by Marcus Samuelsson’s “Staples” chapter in his New American Table. Many of the grain based dishes in that chapter were healthy and varied enough to function as a one pot meal, and yet many could be served cold. Bingo!

Now having said all that I did serve this with soup, mostly because I could not choose between the 2 dishes–expect to see the soup soon. 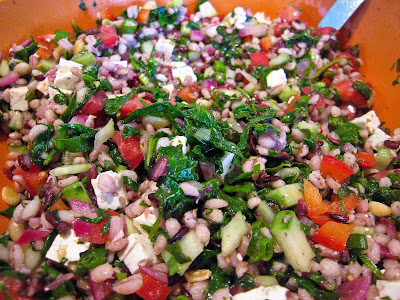 I have to give a shout out to my favorite recipe newsletter, Cookstr, because although I did just purchase Samuelsson’s book, part of my inspiration to do so was this dish from the “Staples” chapter, which I had already copied down from a Cookstr newsletter. So naturally it was the first dish I made, albeit with some changes, most brought on by necessity (black pearl barley is not easy to find in small town America) but some by choice. 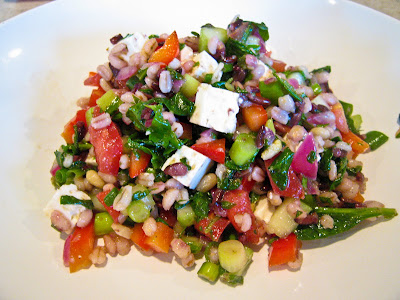 Rinse the barley clean and place it in a medium-large pot. Cover the barley by several inches with salted cold water and bring to a boil. Simmer, making sure the barley remains covered by water, until the barley is tender chewy (around 45 minutes) and then drain and set aside.

In the meantime, also rinse the black rice clean and then put in a small pot and cover by several inches of cold water. Bring to a boil and simmer, making sure the rice remains covered by water, until the rice is tender (it will retain some chew, about 30-40 minutes) and then drain and add to the barley.

Heat 2 tablespoons of the extra virgin olive oil in a large saute pan over medium heat. Add the garlic, pine nuts, and jalapeno and saute until golden and fragrant, about 3 minutes. Add the onion and cook very briefly, tossing, about 30 seconds. Add the za’atar and cook another 30 seconds, then add the spinach and cook until the spinach has wilted, 3 to 4 minutes.