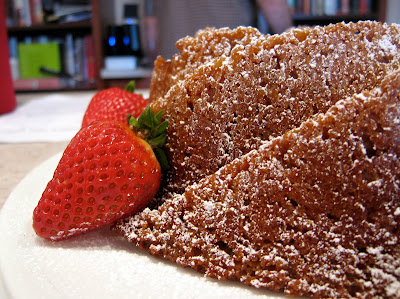 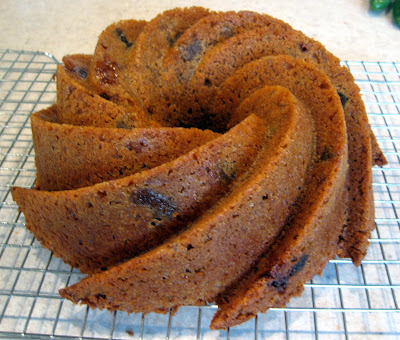 Ha! Thanks, Mom.Well, the gauntlet being laid down and all, I decided to make the cake, especially because I loved the Sugar High Friday theme of really old heirloom type recipes. Be sure to check out the round up on Friday, March 27, at In My Box to see what other ancient recipes people dusted off. It was definitely the oldest recipe my mom could find–although she is now going through ALL of my grandma’s recipes so who knows she might find even older. I definitely come from a baking family. 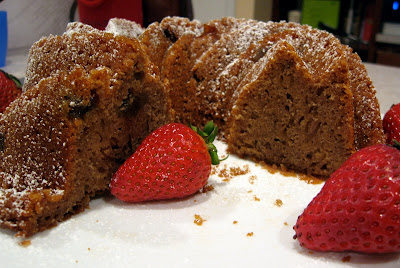 My first question of course was does the jam go in the batter or inbetween layers of the baked cake? After looking at the recipe, and because she made it once before also, my mom said definitely in the batter, otherwise there is not enough sugar in the batter. Duh. I saw she was right as soon as I thought about it. 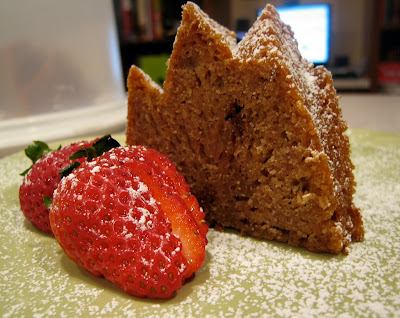 The second question was temperature–I chose 350 F as a nice safe cake baking average. Then I decided that because the butter was melted, I would fold it in at the last minute, as I remembered Dorie Greenspan had called for that method in her Swedish Visiting Cake, a similarly kind of plain but tasty traditional cake. I made a few changes–a sub for the buttermilk, which I was out of, salt because my butter was unsalted, vanilla because if my great great great (whew!) grandma had had access to vanilla I am sure she would have used it, Ceylon cinnamon (not so much a change as a decision) because its fruitiness better compliments the strawberry. The last decision was the pan, which I decided at the last minute by dumping the batter into a 2 1/2 qt bowl, where I decided it was between 9 and 10 cups and should work ok for a bundt pan. 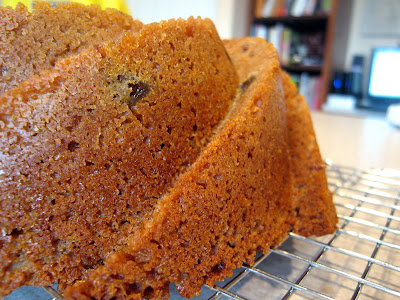 The result? We all agreed the cake was a winner. It was almost more similar to quick bread in texture, definitely not light, but moist (do not overbake!) and fragrant with strawberries, but not overwhelmingly strawberry. I had been worried it would taste fake, like a strawberry milkshake (they taste fake to me anyway–John loves them), but it was pleasingly strawberry–I think the dark brown sugar toned it down by offering the contrasting flavor of caramel. Any flavor jam you want to try should work. 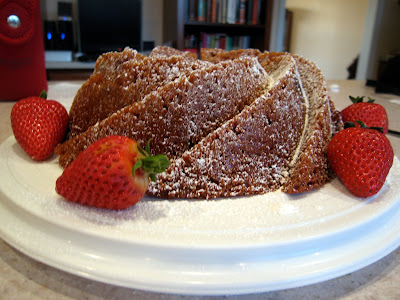 Preheat the oven to 350 F. Grease and flour (I used baking spray) a 10 cup (probably 9 inch) bundt pan. Whisk together the flour, salt, baking soda and baking powder. Set aside.

Beat together the eggs and the brown sugar. Beat in the jam to combine thoroughly. Add the sour milk and beat in. Gently stir in the dry ingredients until incorporated. Fold in the melted butter until incorporated. Pour the batter into the prepared pan. Place in the oven and bake for 45-55 minutes (mine took 52). The cake is done when an inserted cake tester comes out with only a few crumbs attached. Cool on a cooling rack for 15 minutes before inverting and removing from pan. Cool completely before serving. Dust with powdered sugar if desired. 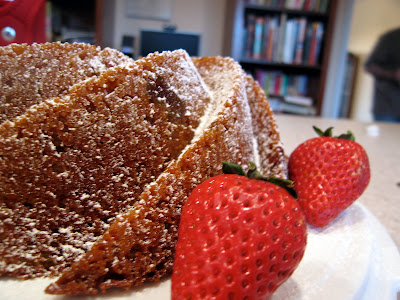