You are here: Home / apples / Spanish Lentil Soup with Sausages and Apples 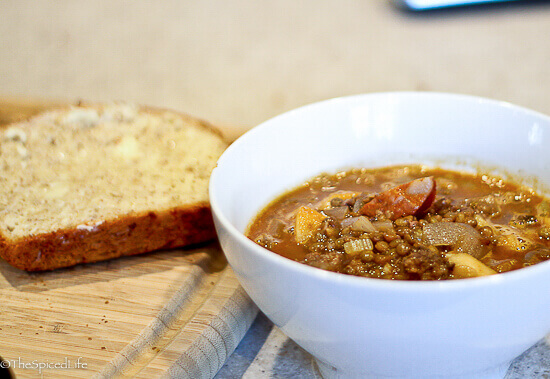 I was all excited to write this post, marking my return to submitting posts to that all-time favorite blog event of mine, My Legume Love Affair.  Then the news about Penn State hit.  I don’t know if it is because I lived in State College, I am a football fan, I am a parent, or just because I am a member of the human race, but I’ve had some trouble shaking the horror of this story.  Maybe it is because I, like many, many others, pretty much bought in to the myth that is Happy Valley.  I don’t mean the football team, you understand, I mean the entire town and the university’s beloved role within it.  All you moms, sisters and daughters of athletes will understand when I say that when I played the game of what coach would I want my hypothetical son to play for, Joe Paterno was at the top of the list.  Now I grieve for every single player who ever played for Joe Paterno and has to deal with this.  Not to mention seeing the faces of children I know on the victims’ faces–because that’s what I do when I hear about horrible stuff like this, I imagine what if it had been…?

Consequently, at the moment a post about beans seems a bit trivial.  However, as I just told a friend of mine who has recently received difficult news of her own, good food can’t fix things, but it can certainly make your day a little brighter.

Or, in the case of this dish, a little warmer.  This stew has all the earmarks of a perfect fall or winter dinner, simmering away during the day to keep the kitchen warm, filling your bellies in the evening to keep you warm.  And if it helps you to not dwell on terrible things, all the better. 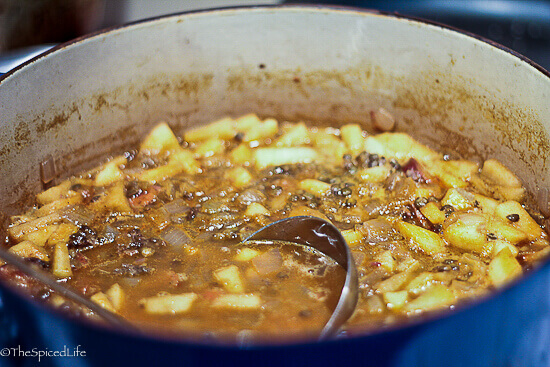 I found the base recipe for this stew in Claudia Roden magnificent new treatise on Spanish cooking, The Food of Spain

.  Filled with gorgeous photos, the book is both an encyclopedic treasure of Spanish culinary reference and a beautiful coffee table book.  I am not sure if my version would perfectly qualify as Spanish, as I removed the serrano ham (feel free to add it back in but I did not have any) and I also added that tasty harbinger of fall in the American midwest, apples.  The original stew called for carrots, but I had none.  The apples add that sweetness, but they also add a tender crispiness.  I would also try this with winter squash.

In Spain they would use a brown lentil, I think, but here in America I personally think the French lentil de puy is the gold standard when you need a lentil that will hold its shape when cooked.  As I mentioned above, I am submitting this recipe to My Legume Love Affair, created by Susan of The Well Seasoned Cook, and hosted this month by briciole.  Be sure to head on over to briocle later in December to see the round up.

For people who want to do something about the situation in Penn State and others like it, I strongly recommend visiting National Children’s Alliance or Darkness To Light, which (I am assured by a friend in the field) do excellent work working to prevent sexual abuse (DTL) and to intervene and support the victims of sexual abuse (NCA).  Darkness to Light is an especially important site in the wake of these events, because all adults have a responsibility to learn the signs of abuse and to be vigilant in protecting children if there is any suspicion of abuse. 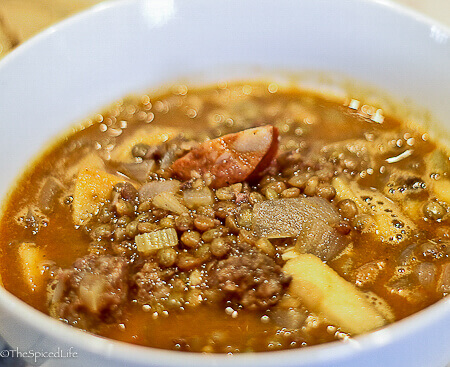 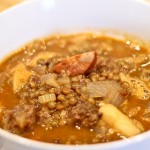 And here is one for the collage fans: