You are here: Home / balsamic / Spanish Inspired Spiced Chicken with Pomegranate and Vinegar 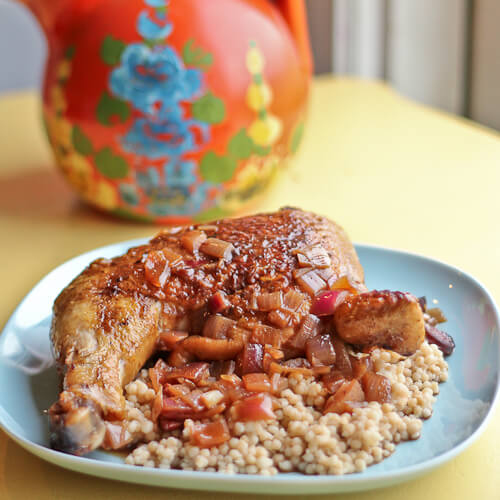 People it has been a week. The kind of week that I am pretty sure was actually 2 weeks. Or maybe 3. Or even 4. John left us toward the end of spring break for a conference in China. That was the Wednesday before last. He is still not home. OK, to be fair he gets home tomorrow, but I don’t know it has been a looooong week. I am not sure I ever realized just how much stress it would add to a day to just have a 15 minute window in which the girls could talk to their daddy. Never mind all the rest. 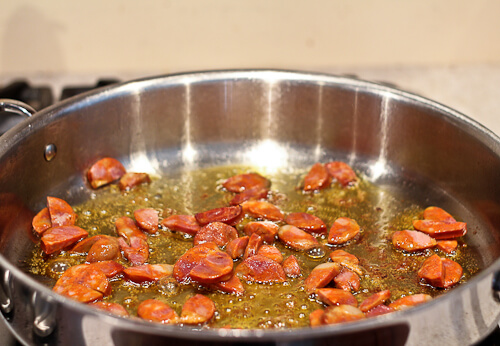 So I guess that is all a rather long winded way of saying ‘scuse the typos, run-ons and general incoherence, folks!

So about this dish–which by the way is the only dish (baking or cooking) I got made while he was gone. Although I have hopes for a cake tomorrow. A girl has gotta welcome her guy home, right? Anyway, this dish started from three places. The first place was a ton of chicken legs–bone-in, drumstick and thigh attached–that my mom needed used because they had been thawed. So I knew I wanted a chicken recipe. The next place was gravitating toward a new cookbook, Janet Mendel’s Cooking from the Heart of Spain

. Janet Mendel has several Spanish cookbooks, two of which I own, both of which are terrific. She writes with an ex-pat’s thorough knowledge of a cuisine having lived there for many years, but also has the advantage of being an American and understanding what Americans have access to in the kitchen. 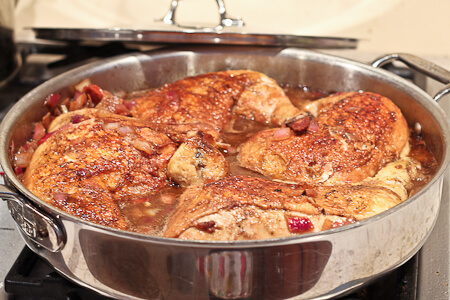 The third and last beginning to this dish was wanting to use one of the fabulous new vinegars I purchased on our trip to D.C. My mother in law took me to this great store, Ah Love Oil & Vinegar, which sells, as the name indicates, artisanal olive oils and vinegars. The kids and I had a blast, trying every single one of the 15-20 each varieties of vinegar and olive oil. My personal favorite of everything I brought home is a lemongrass and mint white balsamic. But I went a different direction with this chicken. 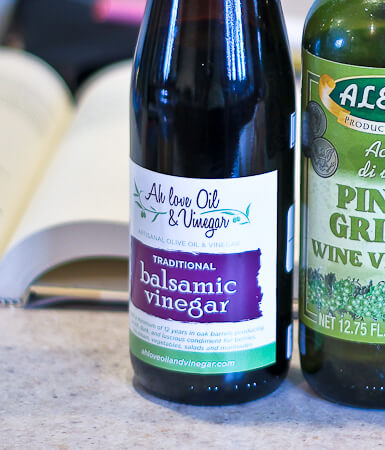 The recipe I started with called for chicken to be braised in a spiced verjus (or verjuice). For those who don’t know, verjus is what results when a vineyard is thinned when the grapes are still quite underripe and thus quite sour. The picked underripe grapes are turned into verjus, a sour liquid used much like vinegar. Because I knew I would not be able to find verjus locally, I skipped immediately to brainstorming and thought of my pomegranate molasses. I mixed that with a white wine vinegar and some of the Ah Love Oil and Vinegar Pomegranate Balsamic Vinegar (the Ah Love vinegars are rich and almost syrupy, so using the cheap white wine vinegar was a cost effective way to stretch the more expensive Ah Love vinegar and make it a tad more sour). 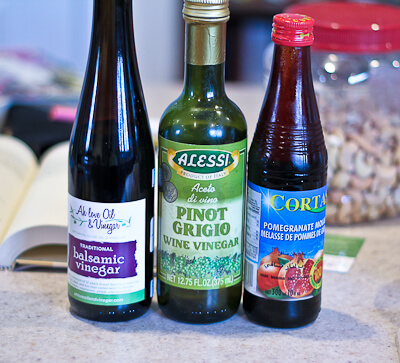 The result was a complex, delicious sauce that coated and complemented the browned and braised chicken without overwhelming it. Unlike many spiced braises, this dish did lose a little oomph the next day, so I recommend drizzling a little extra vinegar or lemon juice into it before serving leftovers. 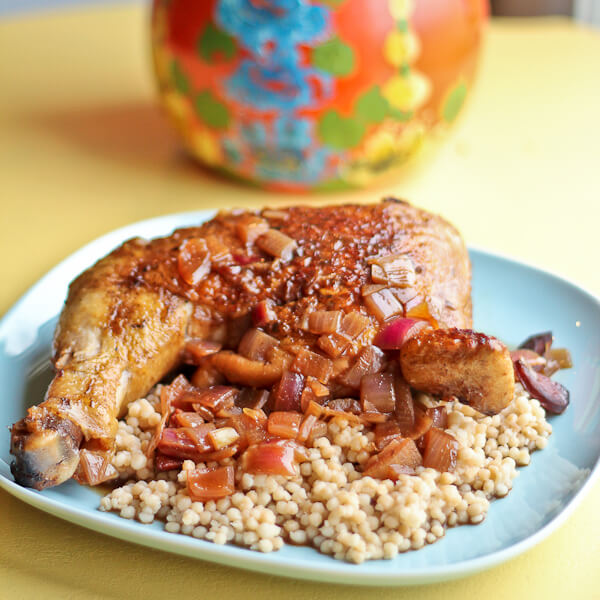 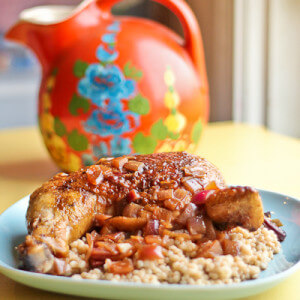 Thanks for reading! I LOVE comments. Use the comment form below to interact, or if you like what you see, and want to see more, please feel free to jump on over to my Facebook page and hit like to never miss a post. It is also a great place to leave me comments or ask me questions.

If you would rather have every recipe delivered to your inbox, please sign up below to be on my email list!