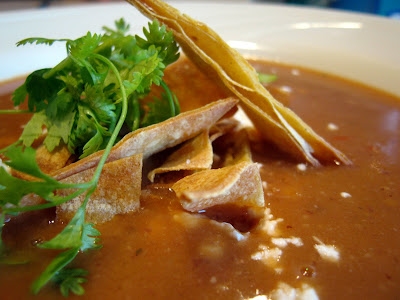 You are staring at the title of this post, the pictures, and possibly scratching your head, unless you are quite familiar with regional Mexican food. There are actually 2 ways of making Tarascan soup, one with a chile-ancho-tortilla base, as I made last week, and one with a purred bean and tomato base. I bookmarked the bean option in the back of my mind and chose the other, as you know. Then this past weekend I was searching for a soup and one of the books I was checking was Steve Sando’s Heirloom Beans, where every single recipe has been a homerun so far. He has a recipe for “Somewhat Tarascan Bean Soup,” so called because instead of the more traditional bayo bean, he uses a cranberry bean. 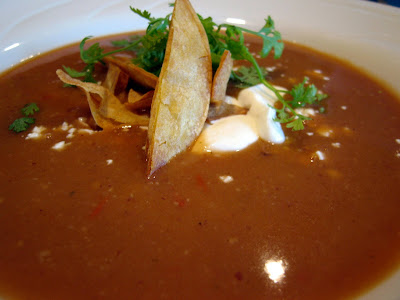 It just felt like fate calling me to make this version of the soup so I can properly compare.

First of all, the soups had little in common to me, aside from certain garnishes and Mexican flavors. I have had other soups that I felt were more similar to the Sopa Tarasca than this bean soup by the same name. Just an interesting observation, not a negative comment. According to Diana Kennedy, the previous version that I made is more contemporary and more likely to be served in a restaurant, at least as of the time she was writing her books. 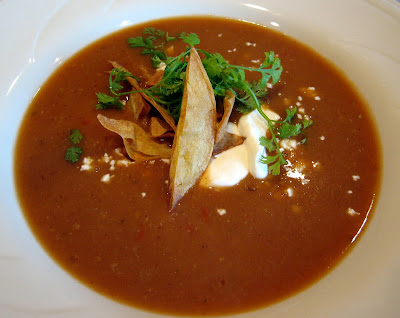 The bean version makes a much better one pot meal–I did not add any uncalled-for garnishes and the soup was plenty filling. I was slower to like the bean version, as was my husband, but by the end, with a little tweaking, we both enjoyed it and had seconds. Alex did not care for it but liked it better the second night, after the afore-mentioned tweaking (mainly smoky chile powder and vinegar). Sammy had a whopping 3 bowlfuls–and would have kept on going except by then the rest of us were enjoying our brownies. The bean version is also better for cold weather–but it has gotten quite chilly here, so the soup was perfect. 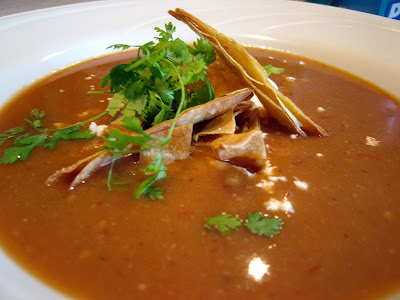 Heat a large, heavy skillet (I used enameled cast iron) over medium high heat. Cut the tomatoes in half and place them in the hot skillet, cur side down. Roast, turning occasionally, for 10-15 minutes, until blackened in spots. Add the oil, garlic and onions. Fry for 0 minutes. Add to the beans and puree, either using an immersion blender or in a blender in batches.

Return the bean puree to a large soup pot. Add the chicken stock to desired consistency. Bring to a simmer and cook for 5 minutes to blend the flavors. Add the oregano and salt to taste. Simmer for at least 10 minutes, longer if you are not ready to serve it (with a lid on). Add the vinegar and taste.