You are here: Home / beef / Slow Cooker Mulligatawny with Beef and Mushrooms 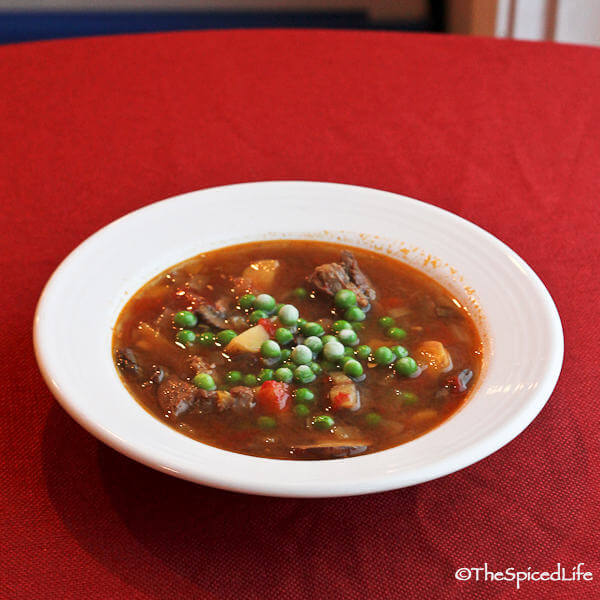 Guys! I have so much to tell you that I don’t know where to start! I realize that to you I may not have gone anywhere, but the last 3 posts were all written almost 2 weeks ago. In that time I have gotten a tan, sailed on my first cruise, taken my children to Mexico, stored up some vitamin D, eaten more beef tenderloin in a short timespan than I can ever remember having done before, learned all of the words to all of the songs in Frozen, and added a slow cooker to my kitchen! 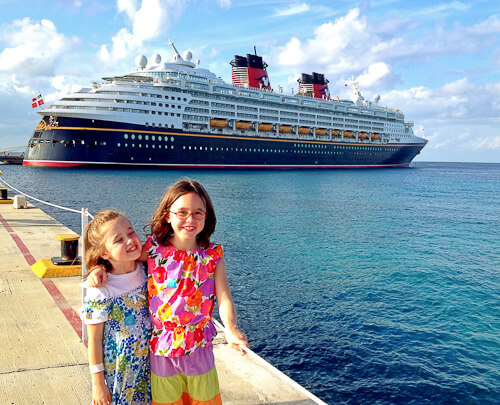 Sammy and Alex at the port in Cozumel, after a day spent snorkeling, swimming in a crystal clear ocean and eating amazing Yucatecan food at a slightly out of the way restaurant recommended by the locals (La Choza if you are ever there).

OK so only some of that is worth mentioning.

The cruise was amazing. I highly recommend Disney cruises if you have kids. I might even recommend them if you do not. We enjoyed it that much. The weather was perfect, the service was perfect, the cooking was very good (oddly the desserts were not so much) and we really loved Cozumel especially. Sammy is still talking about how much she loved the restaurant we went to, where we all ordered food unlike any we could eat here–I told John we have either given our children a fixation on international travel and eating at interesting places or we have given them specifically a bug for Mexico. Hard to say which. Maybe we need a trip to a different exciting international locale to figure it out?… 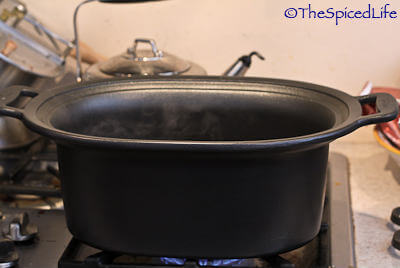 OK now about the exciting development specifically for this blog. After thinking long and hard about it, I have decided to start using a slow cooker. For those of you who do not own or do not want to own a slow cooker–don’t panic! I firmly believe that all slow cooker recipes can be made in a heavy, sealed pot in the oven. In fact, I swear by those dishes. But the truth is I don’t think you guys were finding them, because I think most of you guys own a slow cooker. Going forward, I will be developing and adapting exciting new slow cooker recipes, but I am also going to go back through The Spiced Life archives and adapt some of my previous recipes to the slow cooker.

I am sure some of you will ask which slow cooker did I settle on? I went with the All Clad 7 qt with Cast Aluminum Insert from Williams Sonoma, because I am a very big believer in browning the meats and vegetables before braising them (you can see the insert above, on a burner, and you can see the beef browning in it in the photo below). However, if you own a slow cooker with a ceramic insert, do not worry about it, just brown separately in a frying pan before adding everything to the slow cooker. 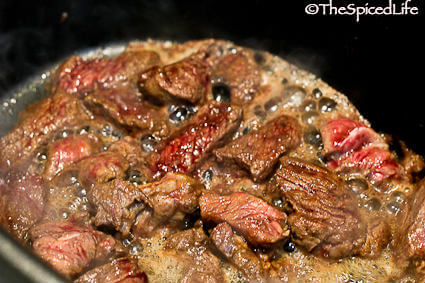 OK on to the recipe I chose for my inaugural use of the slow cooker. I chose to adapt from an older recipe from The Spiced Life archives–and discovered something very quickly. I am no better at following my own recipes than I am anyone else’s! So I will be the first to admit that this Mulligatawny does not bear a ton of resemblance to my Mistaken Mulligatawny from September 2008 (yikes! ‘scuse those photos!).  That recipe was (mostly–it used chicken stock) vegetarian, but at the time I even noted how fantastic I thought the soup would be with beef. And I really wanted to check out the searing capabilities of my new pot, so I wanted to use beef. But did you catch that reference up above to meal after meal of deliciously rare beef tenderloin? John and I especially were dying for a meal that was not so meat heavy. So I chose to use a smaller amount of beef to flavor the soup. I also chose to throw in mushrooms because I had some. So I guess that makes this Mulligatawny flexitarian?

The first night Sammy and John loved the soup, but to Alex and myself it was a little watery. I wondered if maybe there had been less evaporation with the slow cooker than I was used to? The second night I whipped up a tarka and added it to the soup (this post on spicing up holiday meals explains tarkas well), and we all agreed that was fantastic. So that is how I have written the recipe.

You may have noticed, by the way, that in the picture at the very top the peas are frozen. This is because I detest overcooked peas, so when adding them to piping hot boiling soups, I usually add them as a garnish, frozen, to individual servings. That way the peas do not become overcooked when reheating the leftovers (and they help quickly cool down a soup for little mouths). Feel free to add them sooner if this bothers you. 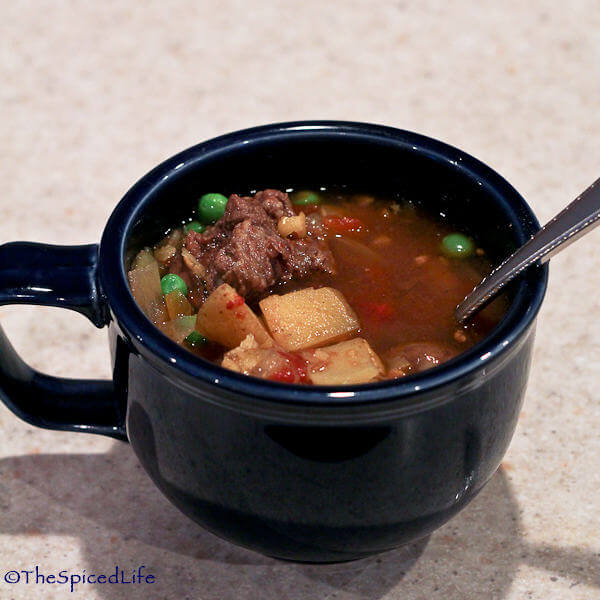 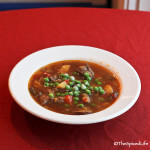