You are here: Home / beans / Sausage and Triple Bean Stew with Crimini Mushrooms 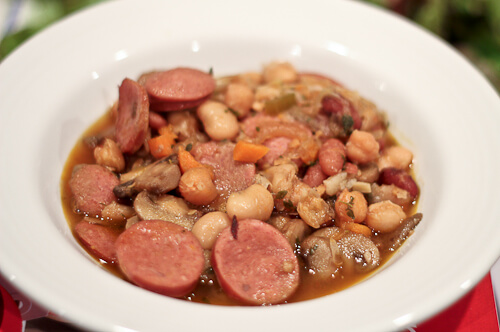 Really this post should have been about all of the awesome places you can go with dried beans on a fall football Saturday–and we’ll get there–but you might notice there is a large turtle in the middle of your screen.  Personally, I blame it on the weather.  I enjoyed this stew, don’t get me wrong, but one minute it is 40 F with a stiff autumn wind and the next–literally a matter of hours in at least one case–it is balmy, 65 F and sunny.  If I am this confused by the weather, what’s one poor turtle supposed to do? 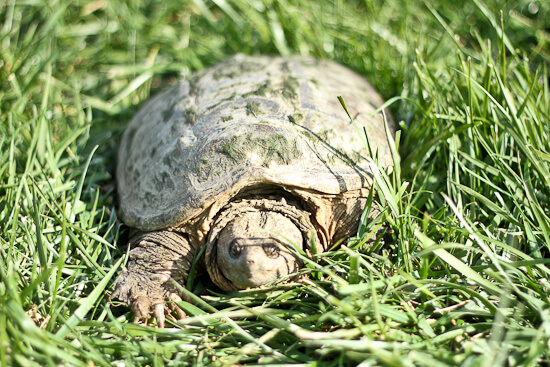 We found this guy meandering across our lawn.  Normally this would not be blog worthy (I believe I have mentioned other turtle sightings before), but normally it would be summer and normally it would be a smaller Eastern Box Turtle.  Instead it is November (November in Ohio! I say yet again–what is with this weather? Shouldn’t all turtles have gone to sleep for the winter by now?) and this was a much larger Snapping Turtle.  Of course I did not recognize him as such, which means that Alex took her, uh, fingers into her own hands? that’s a confused metaphor, the point being she kind of poked at his face with a blade of grass.  When I saw her, I told her to stop immediately just as a matter of simple humanity (I wouldn’t want to be poked in the face with a blade of grass), but when her friend’s dad arrived with his daughter for their playdate, he immediately recognized the turtle and prodded it with his foot.  Good thing that turtle apparently was not phased much by curious little girls because it moved fast and I now realize Alex was lucky she didn’t lose her finger! Yikes!  He posed politely for pictures, then we left him alone, and when next I looked he had moved on–hopefully to find his winter resting ground. 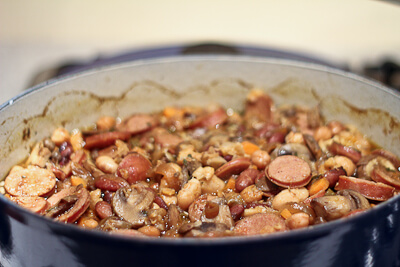 So about this stew.  Which really was perfect football food, not because of the weather (which clearly was all wrong) but because it could cook largely unattended while I watched my game (Michigan if you’re wondering).  It was also wonderful the next day, so I am guessing it would be good tailgating food, cooked the day before.

So that’s the good news about this stew.  The bad news? I was too busy watching my beloved Wolverines to write what I did down.  So this is going to be one of those blueprint without a recipe posts.  I knew I wanted chickpeas and sausage–that was my starting point.  I found some wonderful locally made “frankfurters” in my freezer–I remember thinking when I got them at the local farmers’ market that as good as they were they would be a tad too rich on their own in a bun.  So I grabbed them and went looking for dried beans.  The thing about chickpeas is that Sammy seems to genuinely hate them (unlike the various picky aversions that all kids go through), so I also grabbed dried cannellini beans and some dried tepary beans from Rancho Gordo. After soaking the beans overnight (and defrosting the sausage), I started the beans cooking with some olive oil, onion and garlic while I sat down to watch my game.

When my game was over, I sauteed the sausage in some olive oil, removed the sausage and then sauteed onions, carrots and celery with garlic.  I added crimini mushrooms, which I sauteed in batches, and some fresh thyme.  I dumped the sausage and mushrooms back into the pot and added the cooked beans with their cooking liquid.  I also added some chicken stock base (kind of like bouillon cubes but much less salty).  Salt and pepper to taste.  Enjoy. 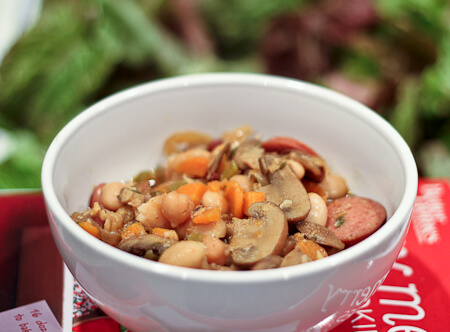