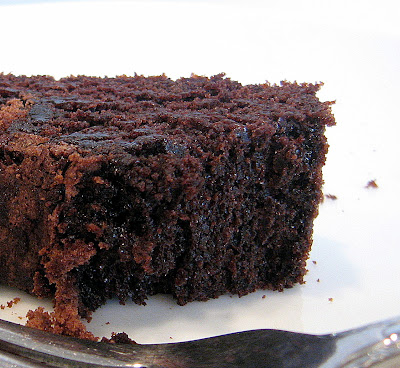 I think we sometimes get stuck in a mindset that chocolate desserts must be decadent and rich, especially cakes. We also of course prefer our cakes in particular to be striking and elegant. Mousse cakes, layer cakes, glazed bundt cakes, flourless cakes… 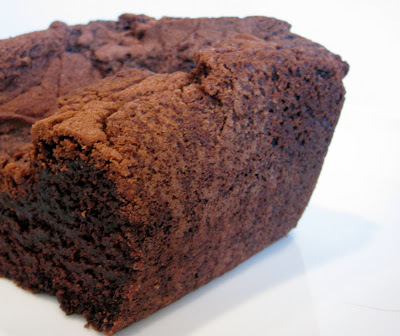 Well this cake is none of the above. I almost did not share it with you as a result, but when I found myself craving it I decided I was being silly. After all there is a place for homely, er I mean rustic chocolate desserts with an understated chocolatey appeal. And when I say homely/rustic, well I do mean it. I have no idea why it caved–maybe I beat the batter too hard after adding eggs? I was using my new handheld mixer–maybe lack of familiarity caused me some problems? Or maybe it is supposed to look like this? In looks it reminds me a little of Nigella Lawson’s Dense Chocolate Loaf Cake, but being neither mega dense nor intensely chocolate, its flavor is pretty different. 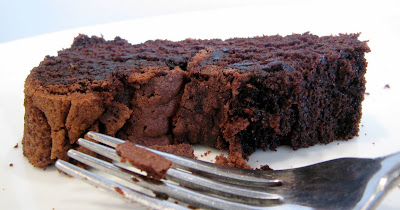 The crust on this cake is, contrary to appearance, quite tasty. Because it toasted the outside a lighter brown, it looks dry but actually is just a wonderfully crispy chocolate crust that suits the interior perfectly. This cake also got better with sitting–the first day I felt it really needed whipped cream (and I was out) but after sitting a day or 2, it became perfect on its own. 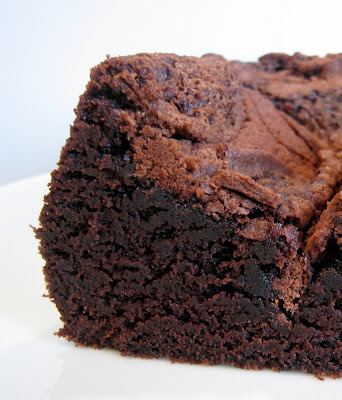 Sift the cocoa powder into a glass (or any heatproof) bowl. Add the espresso powder to the cocoa. Place the cream in the microwave and heat on short bursts until it is steaming/nearly boiling. Pour it over the cocoa. Using a small spatula, mash and stir this into a paste. Set aside.

Whisk together the flour, baking soda and salt. Set aside.

Place the butter and sugar in a large mixing bowl and cream on medium high speed until light and fluffy, about 3 minutes. Scrape down the sides of the bowl as necessary. Beat the cocoa paste in until it is smooth.

With the mixer on speed 2 (or one notch above low), add the eggs, one at a time, scraping down the sides of the bowl after each egg. Add the vanilla and mix it in as well.

With the mixer on low speed, add the flour mixture in 3 additions, scraping down the sides of the bowl after each addition. After the last addition, increase the speed a bit for up to 30 seconds to ensure the batter is totally mixed.

Scrape the batter into the prepared pan and smooth the top with a spatula. Bake the cake until it is firm to the touch and a toothpick inserted in the center comes out clean, about 70 minutes. Let the cake cool in the pan for 5 minutes and then invert it out onto a cooling rack and flipping it right side up to finish cooling completely. 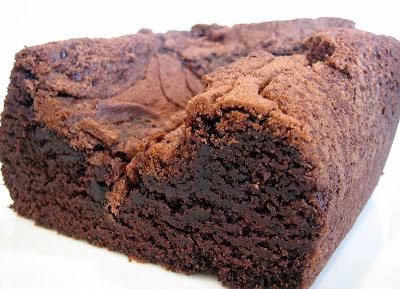