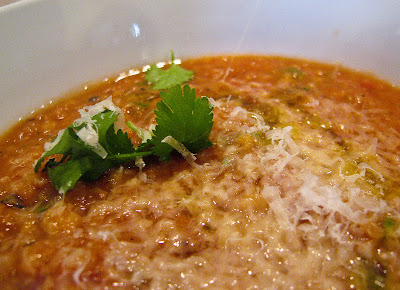 The first meal back from a vacation is always interesting. You’re never sure what is in your fridge, your pantry, what has gone bad, what might still be use-able, what your husband might have eaten in your absence…. For example, I threw out 3 onions when making this soup, that had apparently gone bad in the increased warmth and humidity of summer. 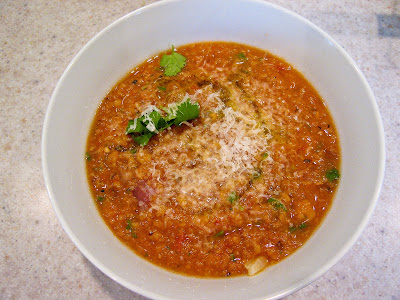 But one thing you can always count on is dried beans (and in my house, we’ll add onions, garlic and canned tomatoes to that list). I was in the mood for Mexican food, as I still had the lingering euphoria of that shrimp soup on my mind, so I went searching through my Mexican cookbooks. I came across a fava bean soup by Rick Bayless that was instantly intriguing in its use of mint, something I do not associate with Mexican cuisine. The fava beans were dried, so I thought I might sub chickpeas to good effect. (I confess I had to send John to the store for the mint and cilantro, but they are added last so it worked out ok.) 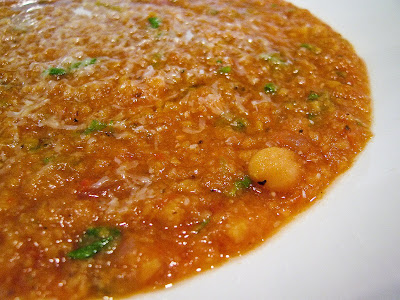 Rick Bayless’s early cookbooks (indeed all his cookbooks) are splendid gateways to another culture and cuisine-but they can also be rather involved, something he himself realized when he published Mexican Everyday for people who wanted authentic Mexican flavors in less time. In that book he gives his seal of approval to Muir Glen’s fire roasted tomatoes, and I became an addict and subbed them in this recipe without a second’s thought. I also changed his fried strips of pasilla chile pepper that then marinate in vinegar to instead just cooking the dried chile peppers in the soup and adding some cider vinegar at the end. In effect, I’d like to think I remained true to the soul of the Mexican flavors, but I certainly took some streamlining liberties. Between that and my use of chickpeas, I am not sure the final result bears much resemblance to the original, but we sure liked it anyway. John, who does not care for silky blended soups (although he eats them to make me happy), especially liked this puree, with its rustic, chewy bits of chickpeas.

I am submitting this dish to my favorite blog event, My Legume Love Affair. This June it is hosted by A Little Bit Of Spain In Iowa, so be sure to check out Diana’s blog in July for the round up. 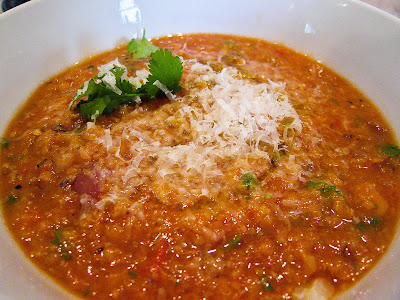 Start early in the day–or even the previous day–by bringing the chickpeas with the lard, chopped onion and the minced garlic to a boil in a large pot. Make sure that the water covers the chickpeas by at least 2 inches. After it boils vigorously for about 5 minutes, reduce the heat to low, cover the pot, and simmer the chickpeas until tender. Salt to taste and simmer another 10 minutes. At this point you could refrigerate the beans until the next day.

Preheat the oven to 475 F. Toss the thickly sliced onions and the papered garlic cloves with some olive oil and generously salt and pepper them. Spread them out on a cookie sheet and roast them, tossing occasionally, until charred at the edges. Remove the tray and immediately remove the garlic to a cutting board to cool. Dump the roasted onions into the chickpeas.

Squeeze the roasted garlic out of the cloves and mince it. Add it to the chickpeas as well as the fire roasted tomatoes and Mexican oregano. Bring to a simmer and partially puree with an immersion blender (if you prefer, partially puree it in stages in a blender). Because these are chickpeas, and not a creamier bean, the texture will be quite rustic and have a lot of chew to it, rather than creaminess. Add the pasilla chile peppers and let simmer for 15 minutes. Add the mint and cilantro and 1 tablespoon fo the cider vinegar. Taste for salt and more cider vinegar–if you like it spicier, add less cider vinegar and instead more hot sauce, such as Tapatio. Serve garnished with grated queso anejo or Parmesan and a drizzle of good extra virgin olive oil (I used a Spanish one).