You are here: Home / chickpeas / Potatoes & Chickpeas: Food That Is Good For The Soul 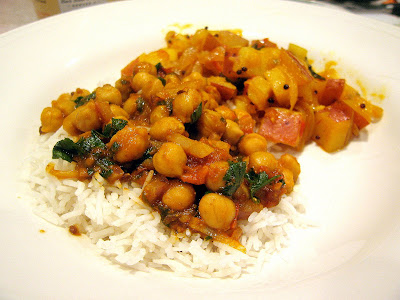 I have discovered that, second to Mexican/Latin flavors, Indian flavors are fast becoming one of the things I crave when I am sick. Hearty, warming, homey, soul food. No doubt my parents are staring at this in some confusion wondering how Indian food has come to be comfort food for me since I had never even tried Indian food until after college. My family, escept my sister, has a strong aversion to Indian food, so of course I waited until my mom had left, but then the first thing I made for us was this dish of chickpeas on rice with potatoes. A little starchy, yes, but I crave starch when sick AND I started with the potato dish, but everything else I looked at and felt up to making seemed to need rice served with it. So 2 starches it was. 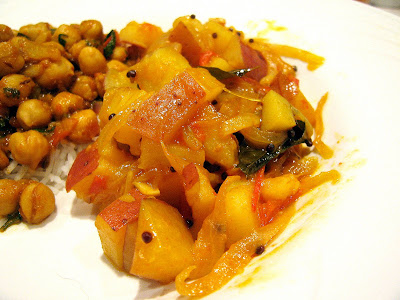 Both of these dishes were wonderful. The chickpeas were the more exciting discovery as I had never cooked with amchur before (dried green mango powder) and unsurprisingly I loved it (it is sour). It was somehow earthy and sour at the same time–which I had read but not really grasped until trying it, since that seems like opposing flavors to me. If you like sour foods I cannot urge you strongly enough to pick up some of this “spice” (it’s not really a spice). Expect to see more dishes with it on this blog. Even now as I write this, several days later, I am craving more of those chickpeas, and there is a pot of dried chickpeas simmering away on the stove, waiting for me to try a new variation.

But I don’t mean to shortchange the potatoes. The simmering makes them much creamier than regular sauteed potatoes, and the onions and mustard seeds are the perfect complement to the tubers. And if you are wondering, both my kids devoured both these dishes. I guess no one will be surprised if they think Indian flavors are comfort food! 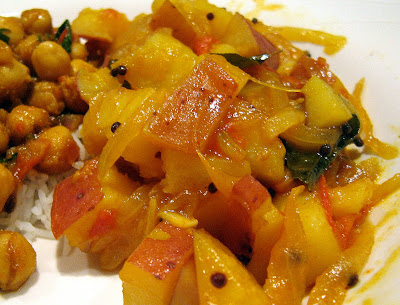 I said a while back that with fall my pictures get sadder–wow, with the time change I had forgotten what it was like to serve dinner in the dark! I need to get the photo box set back up in the dining room (we eat in the kitchen) so that it is always ready and waiting for photos. These pictures are the sad result of photographing on a crowded counter with absolutely no daylight to supplement the kitchen lights. But I was hungry, tired and coughing, so dim pictures are pretty much what you get. 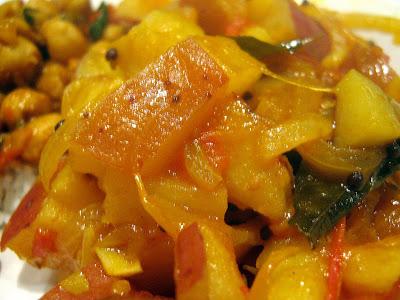 Heat the oil in a large nonstick or well seasoned pan over medium high heat. Add the ghee. When hot, add the mustard seeds. When they start to pop, add the curry leaves (stand back! they will splatter). Stir a few times. Now add the onions and sprinkle with a pinch of salt. Cook until they are starting to brown at the edges. Add the turmeric and paprika/cayenne powder with another pinch of salt. Stir fry another 2-3 minutes. Add the potatoes and toss, coating the potatoes evenly with onions. Add the tomato and asafetida. Stir. Add 1 cup plus 2 tablespoons of water and bring to a boil.

Cover the potatoes and reduce the heat to medium or medium low depending on your burner–you want a vigorous simmer. Cook for 10 minutes, or until the water is absorbed and the potatoes are fork tender (this is why I recommend boiling potatoes–I am concerned baking potatoes might fall apart). Remove the cover and fry the potatoes, stirring occasionally, on medium low heat for 5 minutes, to completely rid the dish of water and also to brown the potatoes a little. Sprinkle with salt to taste. 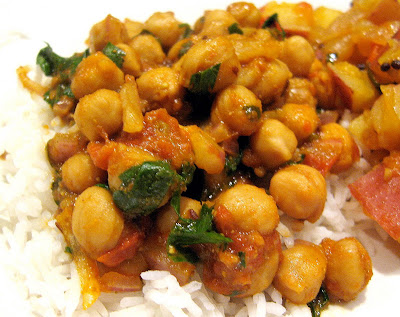 Heat the oil in a medium sized saucepan over medium high heat. Add the cinnamon stick and cardamom pods and roast until fragrant. Add the cumin seeds and continue to roast until the seeds are fragrant and browning–but do not burn. This will be a matter of seconds. Add the tomatoes, mango powder, coriander, ground cumin, cayenne/paprika and turmeric. Sprinkle a pinch of salt in to taste as well. Bring the sauce to a simmer and lower the heat to medium or medium low. Continue to simmer, partially covered, stirring occasionally, until the oil starts to separate from the sauce. This will take 5-10 minutes.

Stir in the chickpeas, 1 cup of water and half of the cilantro. Cover the pan and simmer the curry, stirring occasionally, until the flavors blend and the sauce thickens, about 20-25 minutes. Before serving, sprinkle with remaining cilantro and chopped red onion, and taste for salt. Serve with rice or bread.