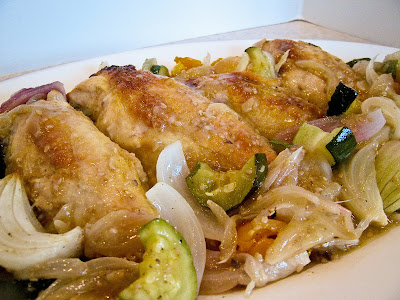 It is not often that I really rave about a chicken dish. A dish with chicken in it, that the chicken does not dominate, sure, but not dishes where chicken is the star. I’ve just never been a chicken fan. This dish, however, I am raving about. It is wonderful, the tart citrus, sweet honey and onions, and the umami chicken all coming together to create a really lovely sauce that perfectly complements the chicken and roasted vegetables. It is also an easy dish, most of what little work there is being done in the morning. 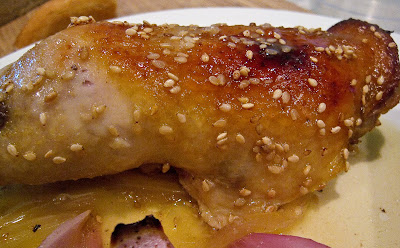 I took this picture the first night–the other pictures were from later, after I had more time to plate the dish. Which explains why this chicken is so much darker–it browned really nicely, never had sauce poured over it (unlike the leftover chicken, which lost that crispy just baked look), and I ate it the first night, so it was gone by the time I took the other pics. 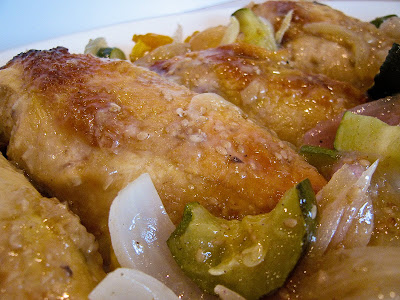 I served it with crusty bread to sop up the extra sauce and sweet yellow pepper, red and Vidalia onions and zucchini roasted separately at high heat, toss in extra virgin olive oil with salt and pepper. The veggies worked perfectly, and the second night I served the chicken on top of the roasted veggies. 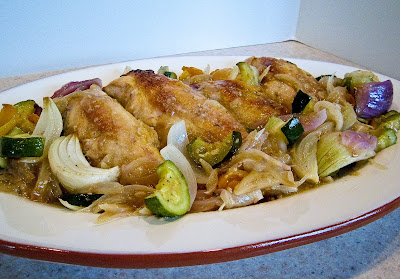 approx. 4 lbs of chicken pieces, skin on and bone in (or 1 chicken cut up), rinsed and patted dry
coarse salt to taste 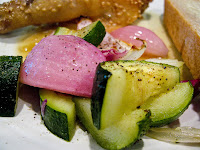 Lightly spray with cooking oil a large casserole dish. place the chicken in it, skin side up, in one layer. Rub the chicken with the salt and ground spices. Let sit for 15 minutes.

Place the chicken, uncovered, in the oven. Bake for 25 minutes at 400 F and then reduce the temperature to 350 F. Bake the breasts an additional 20 minutes, dark meat an additional 30 (just remove the breast 10 minutes early). Stir in the sesame seeds, return the breasts to the pan, bake for an additional 5 minutes. Before serving, taste the sauce for salt or honey. Serve over roasted onions, peppers and zucchini (roasted in chunks on a separate pan).