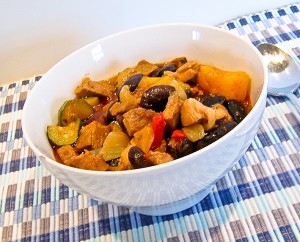 I got so carried away the other day describing my newfound love of all things Mediterranean that I never really discussed what made the cooking method of that pork shoulder so special. You guys all know that I am a low and slow girl. I’ll be the first to admit that when I first read Paula Wolfert’s recipe in The Slow Mediterranean Kitchen: Recipes for the Passionate Cook

, I was highly skeptical that the pork would truly be tender. In the past many famous chefs and cookbooks authors have advised cooking tough cuts of meat like the pork shoulder or the beef chuck for less than 3 hours—and never once have I been satisfied with it. In a traditional braise (which Wolfert’s method is not), under 2 hours does not produce, to my mind, a truly falling apart tender hunk of meat. Or more to the point, it does produce a true hunk of meat, one that can still be sliced, which is not really my definition of “falling apart.” 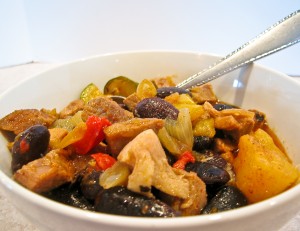 The point being I just was not sure how much I was going to like pork shoulder that was simmered in water and then chopped, fried, and simmered briskly.

It was genius. The pork was completely tender and so deliciously, well, pork-y. I immediately started plotting other ways that I could use the same cooking method but with other flavors. 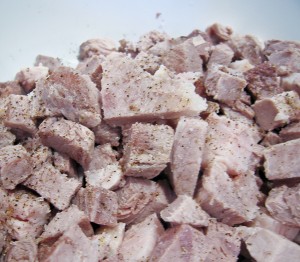 The chopped pork, after simmering.

The original intention was to wait a while, but John and I had a misunderstanding and instead of placing the still frozen other half of the pork shoulder back in the freezer, he placed it in the fridge where it thawed completely. Yikes. So now I needed a pork shoulder recipe and fast. 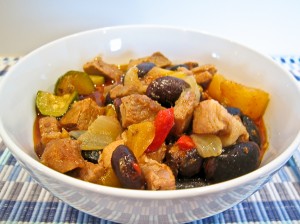 I decided to use the same cooking method but with Mexican flavors. I used dried Mexican chile peppers, dried Scarlet Runner beans from Rancho Gordo and added bell pepper and zucchini to the mix. Then, I was in the process of transferring the dish to the casserole when suddenly I realized the dish smelled so much like tacos al pastor that it simply had to have pineapple. To have not had pineapple in this dish I think would have caused the dish to be brutally disappointing, it smelled so much tacos al pastor. Luckily I had canned pineapple—one of the few canned fruits or veggies I keep around—and in went the pineapples with some of the juice. And it was perfect. We ate this one without rice and I loved every single slurp. 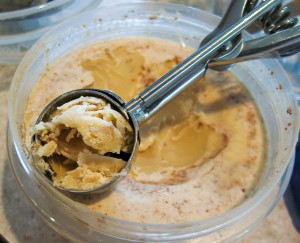 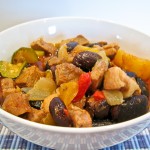 Affiliate links were used in this post, but only to link to items being discussed and linked to in any case.