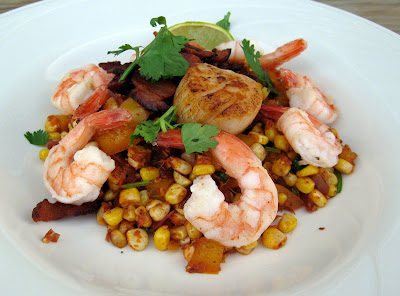 2009 may be forever remembered as The Year I Got Over My Problem With Seafood. 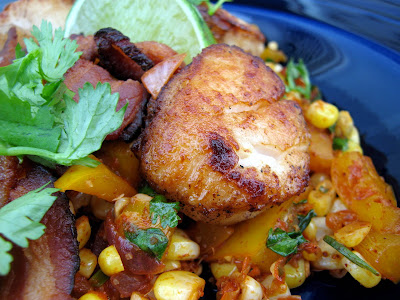 Some of you who know me quite well may be wondering how on earth that happened? Well, Alex happened. She just so clearly loves seafood and I wanted to foster her love of ALL foods, so I started looking for ways to start cooking it. Then I found out I loved scallops (most of my experience with seafood is Gulf based, so I had never tried scallops growing up), which kind of sealed the deal since it meant that I knew there would be something for me to eat even if I was avoiding the shrimp. 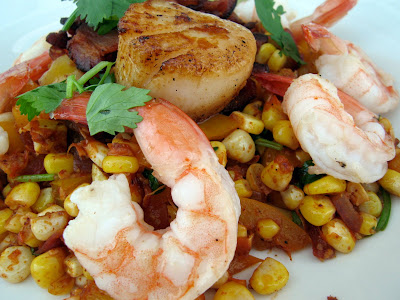 It also happened because I started experiencing seafood in other cultures–and realized that just because boiled shrimp gives me the wiggins I still like it just fine in a Vietnamese summer roll. This was brought home to me most clearly when John and I were in Khao Sok National Park, in southern Thailand. We took a boat in to our campsite with a guide who spoke some English–and when we got to the site it was apparent it was mostly a retreat for other Thai people. Which meant no one else spoke English. It also meant they treated us as the guests of honor. So while John and I were trekking up a mountain, listening to monkeys scampering above our heads, the guy who drove the boat caught a fish for dinner. When we got back, as the honored guests, they gave us the fish head (cooked, of course, with some kind of dipping sauce). Keeping in mind that neither I nor John ate fish at this point, we pretty much just stared at it. We desperately did not want to be rude, but neither of us had the slightest idea of how to tackle it. Plus I had grown up with a parent who was paranoid about fish bones, just adding to my trepidation. And we were surrounded by people staring at us, chattering away in Thai, grinning… 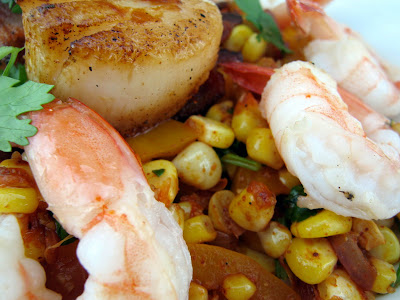 The guide smiled at us in concern, probably used to squeamish Americans. We told him we were grateful but had never eaten a fish head, so if he could just advise us?… The answer involved pulling the flesh out from the cheeks–and dang if it was not one of the most amazing things we ate in Thailand. Succulent, rich, dripping with some amazing sauce (something on the sweet and sour side but I don’t remember it very well now). We cleaned up that fish head pretty well. 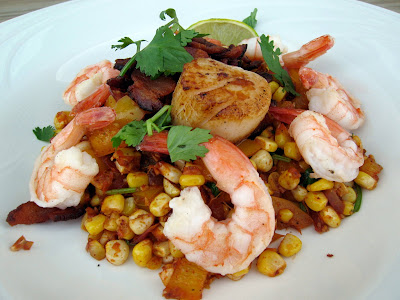 In a large nonstick skillet, heat the oil over medium heat. Add the bacon and fry, rendering all of the fat until the bacon is crispy. Remove the bacon with a slotted spoon. Pour all of the oil out of the pan and wipe the pan clean. Pour all but 3 tablespoons back into the pan, through a sieve to filter out bits that might burn, and turn the heat up to medium high. Working in batches and taking care not to do too much at once (you want the seafood to sear, not steam), pan sear the scallops and shrimp in the bacon fat and oil. Set aside as you finish. When done, pour all of the oil out, wipe the pan, and add the remaining 3 tablespoons of bacon fat/oil back into the pan. Turn heat to medium high.

Turn off the heat and add the cilantro and lime juice. Taste for salt and pepper. Serve by placing a generous scoop of the relish on each plate, sprinkle some bacon pieces over it, and place some of the scallops and shrimp on top of that. Garnish with some extra cilantro and a lime wedge.