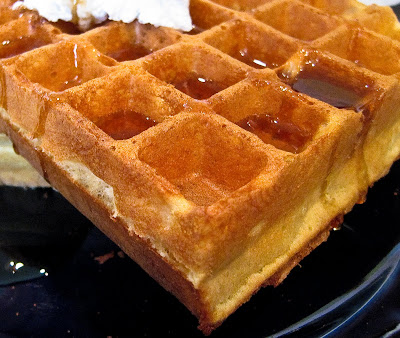 I was thinking I could rename my blog “Waffles!” for the next few weeks. It’s not often I get a new appliance that I want to use this much. Plus, the faster I try all the waffles from the All Clad pamphlet, the faster they will get on my blog–and the faster I can lose the pamphlet, which is completely inevitable. 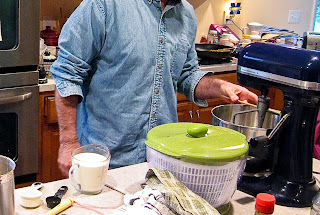 I was threatened with dire consequences for taking John’s photo while he was making the batter. I compromised by cutting his head off, lol. Actually I don’t do face shots on my blog anyway, as you’ve probably noticed. But here it is, proof that he made the batter (and the girls did help… some. But they weren’t helping at this particular point).

Anyway, John asked me what I wanted to do for Mother’s Day, with the caveat that he hates eating out on mother’s Day and he is not comfortable cooking for me. LOL! Not that I blame him–I also hate trying to get a table on Sunday morning for Mother’s Day, and I am such a control freak in the kitchen I cannot blame him for the latter. So I asked him to get the kitchen ready for me (cleaned counter, etc–which he obviously did after the above photo was taken, haha), and he and the girls made the yeasted waffle batter that you make the night before. That way, not being a morning person, I could sleep in, roll out of bed, and make the waffles. And bacon. 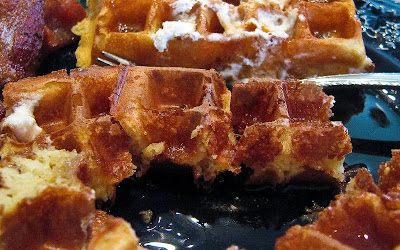 These waffles were also excellent and different enough to warrant trying. John slightly preferred the Buttermilk Waffles; I preferred the taste of the yeasted but the texture of the Buttermilk–which led me to wonder if I should try separating the eggs for the yeasted and folding whipped egg whites into the batter with the baking powder the next morning. The yeasted waffles were a tad chewier, which is not to say they were chewy. It did make me wonder though if those dense, chewy waffles I dislike at my local place were yeasted (and badly done). I also think that to truly experience yeasted waffles I probably need to wake my sourdough starter up and try them that way. But he is currently in the 100 Year Slumber so that will have to wait.

I am submitting these waffles to Yeastspotting over at Wild Yeast. Please excuse the photos–my white plate for photographing broke! So now you know what our food looks like to the rest of the family, which sadly does not take nearly as nice of a picture. 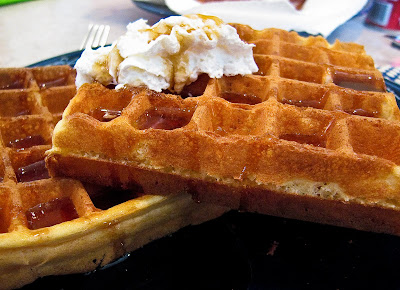 All Clad Yeasted Waffles
from the All Clad Waffle Maker pamphlet

Unlike other waffle recipes, this one works best with an electric mixer. Combine the yeast, water, and 1 tablespoon sugar in your mixing bowl. Let stand until the yeast gets frothy, about 10 minutes. Add the remaining 3 tablespoons of sugar, milk, butter, eggs, salt and flour. Using a flat beater, beat on medium speed until the batter is smooth, 3-5 minutes. Our batter still had very small lumps in it, which I decided was ok, and it was fine. Cover the bowl with plastic wrap and refrigerate for 12-24 hours (the batter will rise some but not a lot).

Preheat the waffle maker according to your directions. Preheat the oven to 200 F for warming the completed waffles if necessary.

Using a rubber spatula, gently stir the baking powder into the batter. The batter will deflate some, which is ok. Cook according to your waffle maker’s directions.