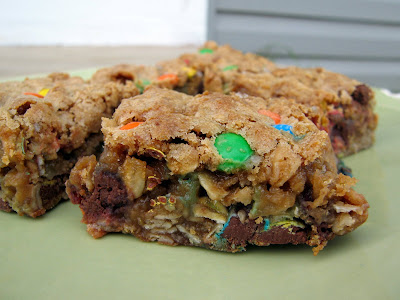 A while back I was craving an oatmeal cookie with chocolate chips–but I was also feeling very lazy so I wanted a bar cookie. I was surprised that I had trouble finding one without peanut butter–I love peanut butter cookies as anyone who reads this blog knows, but that was not the flavor I was craving. I wanted serious oats. Some of you may remember the Sesame Street M&M Oat Bars–but those, as tasty as they were the first day, did not keep as well for me. Plus I wanted something chewier and more decadent. Eventually I found a chewy oatmeal cookie recipe from King Arthur that I thought I would try to turn into a bar cookie. 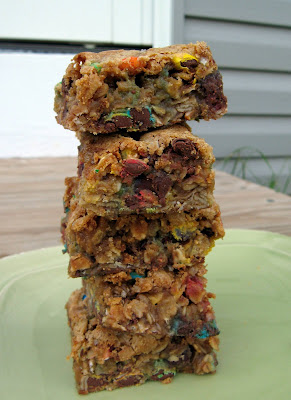 Easy enough, right? No. The entire pan burbled and bubbled and generally behaved very strangely. By the time the bars were done, the M&Ms and chocolate chips were totally melted into the bars and the bars were tasty but too rich. Seriously–they left you feeling a little queasy in the stomach if you ate 2, and I cut my bars pretty darn small. But, as I say, they were tasty, very tasty. John’s department gobbled them up. 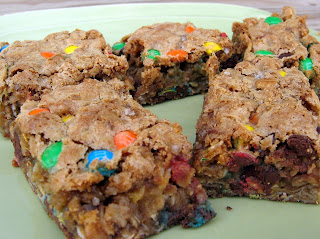 So I decided to tinker. I added a little flour, reduced the light corn syrup, added some sugar and milk–all of these were ingredients that were already present in the cookies, I just changed the amounts, except I got rid of the shortening. In my opinion, shortening has no place in a bar cookie, where spreading is not a concern. And I used 2 eggs instead of 1. 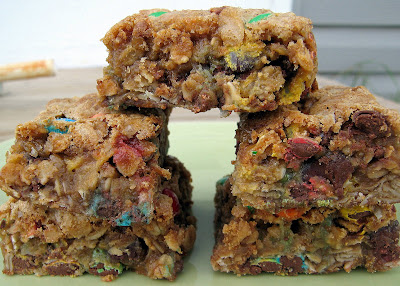 I don’t know if these are perfect yet, but they are much better, more like what I was envisioning, and so I decided they were worthy of sharing. 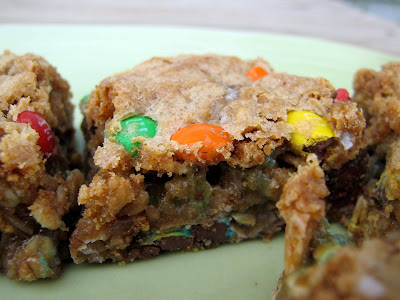 Preheat the oven to 350 F (or 325 F convection). Lightly spray a 9X13 pan and line it with parchment paper, with the sides overhanging for easy removal. Set aside. 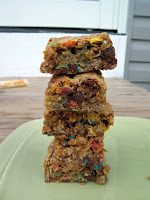 Cream together the butter and sugars until light and fluffy. Add the table salt and baking soda and mix further. Add the eggs, one at a time, mixing thoroughly after each addition. Add the vanilla and beat well. Add the corn syrup and milk and mix thoroughly again.

With the mixer speed on low (if using a mixer), add the flour and oats and partially mix. Add the 1 cup M&Ms and chocolate chips and mix, on low, until completely mixed–finish by hand if necessary, do not over work the dough.

Dump the dough into the prepared pan and smooth it out, patting it evenly into all corners. Sprinkle the grey sea salt over the pan to taste. Then sprinkle the remaining M&Ms over the pan for a pretty appearance and slightly press them down (kids are great at helping with this part).

Bake the bars for 35-45 minutes, rotating the pan halfway through baking. Reduce the temperature if the outsides get too brown. The middle will still be pretty soft when you remove them, but the top will be quite golden brown and shiny. Let the bars cool completely in the pan. As a matter of fact, I liked these better the next day, when they had a chance to really firm up.