You are here: Home / avocado / Mexican Green Gazpacho With Shrimp 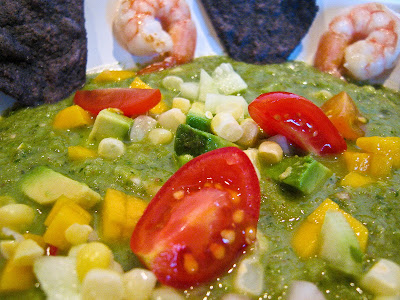 My sister visited recently, and one thing we always do when she visits is cook. Recently we have liked to make Indian food especially, but the doctor has her on a low carb diet at the moment pertaining to some health issues, and so we thought it might be better to skip the copious rice and potatoes in Indian food. I mentioned that I had been dying to make this New World gazpacho as soon as the summer produce hit, and she loves gazpacho, so we turned it into a meal. It’s heavy use of garnishes meant that Josie could avoid or limit the extra carbs, for example the corn and tortilla chips. 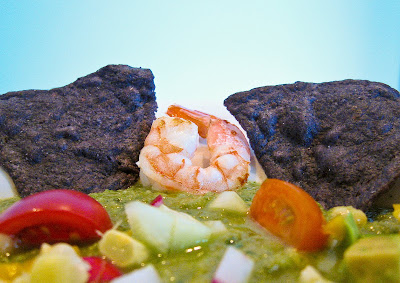 The adults loved the gazpacho, Alex liked the gazpacho, and Sammy was very suspicious of it for some reason. And she loves salad so it was not the green–maybe it was the pureed green? At any rate, this is a fantastic twist on traditional gazpacho. My only complaint is that I would have liked a heftier protein than just the shrimp. Spicer also serves it with crabmeat, which I did not have. I thought maybe a roasted pork tenderloin would work well next time. 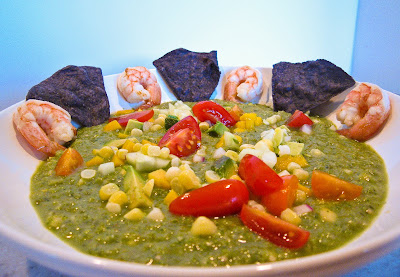 Heat 2 tablespoons of the oil over medium high heat in a medium to large skillet (I used nonstick). When it is hot, add the onions, poblanos and tomatillos with a sprinkle of salt. Cook for about 10 minutes, stirring occasionally, until the tomatillos begin to break down. Scrape the veggies into a bowl and let them cool a bit. Wipe out the pan.

In the meantime, heat the additional 4 tablespoons of oil in the same skillet, and when it is hot add the bread. Fry the bread, stirring, until it turns golden. Add the garlic and fry 1 more minute, tossing. Add the onion mixture and this bread mixture to a blender and blend until smooth. Depending on the size of your blender, you may need to blend everything in stages and then mix it together after (which is what we did).

Add the cucumbers, scallions, cilantro, cumin and half of the lime juice and puree until smooth. Season the mixture to taste with salt, pepper, hot sauce and additional lime juice. Puree more cucumbers if the mixture is too strong.

Serve with the garnishes listed above. 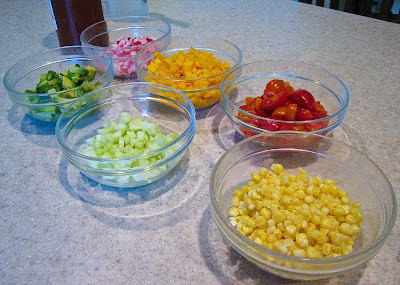