You are here: Home / misc / Marrakesh: An Open Letter to Sammy and Alex

This is Daddy writing, because Mommy was sick most of the time we were in the city called Marrakesh.  We made it through the Sahara intact, without being buried by a sand storm or eaten by a camel.  But Mommy really did not feel well, and by the time we got to Marrakesh she was not up to leaving the hotel room.  So I walked around by myself to see the city.  This was more difficult without her, because she has studied French.  In Tangier many people spoke either English or Spanish, and in Fez Mommy could communicate with them for me.  I had to communicate with a lot of hand gestures a lot of the time.

This picture is in the middle of the city, the Koutoubia Minaret, which was built over 900 years ago (and presumably renovated on occasion since).  I was not allowed to go into it, but because it was taller than most buildings I could frequently see it when I got lost – so it helped me find my way around. 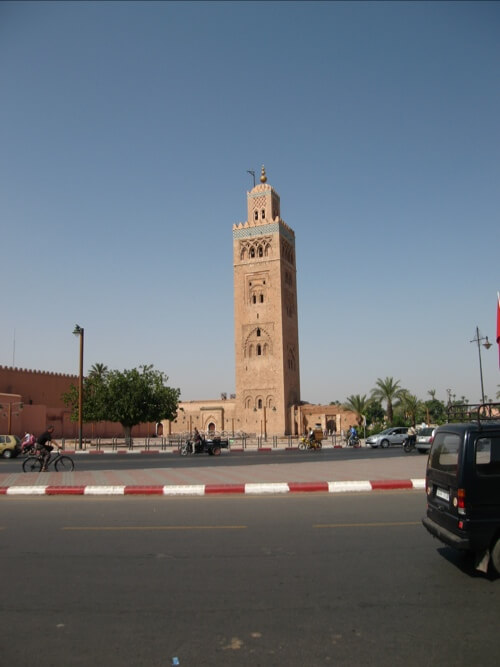 The Medina of Marrakesh is like the Medina of Fez (where Mommy and I visited before the desert), but not as confusing.  It’s still like a maze, but an easier maze.   Some of the streets were more open, looking like this: 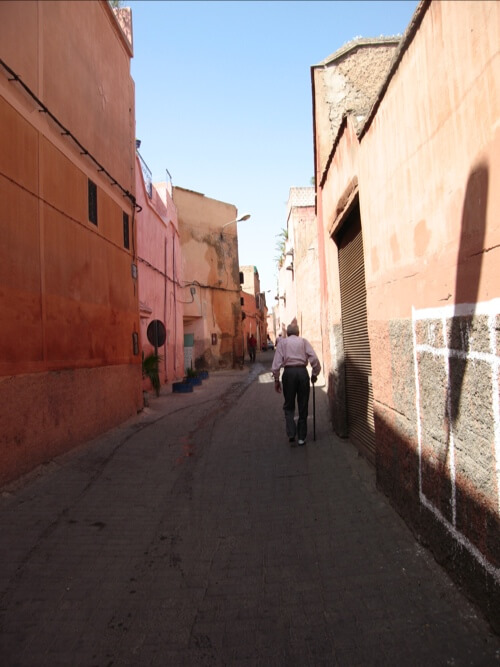 while others were lined with shops: 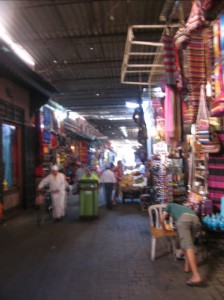 You probably notice that in this picture the people are fuzzy and out-of-focus.   I think they are seeing a doctor about this.

Since Mommy was sick, I went spice shopping for her.  Here is where I bought some ras el hanout that I am sure we will get to try soon.  We also bought a lot of saffron because it was so cheap ($2/gram). 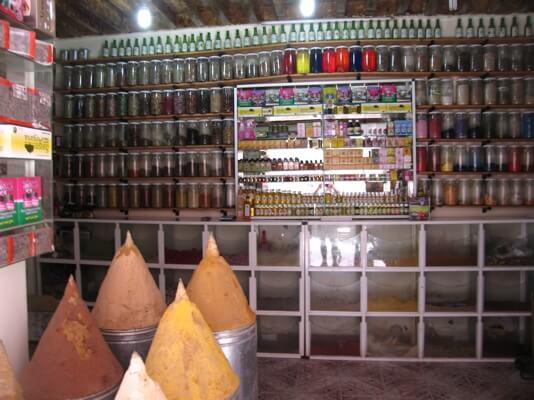 One place I really wanted to see was ruins of the “stork palace”, the Palace el-Badi.  About 450 years ago a Sultan built this palace to be a marvel: he spent amazing amounts of money on it, and it took 25 years to build.  And then, less than 100 years later, another Sultan took everything valuable from it — which took him 12 years to do.  Now only storks live in it. 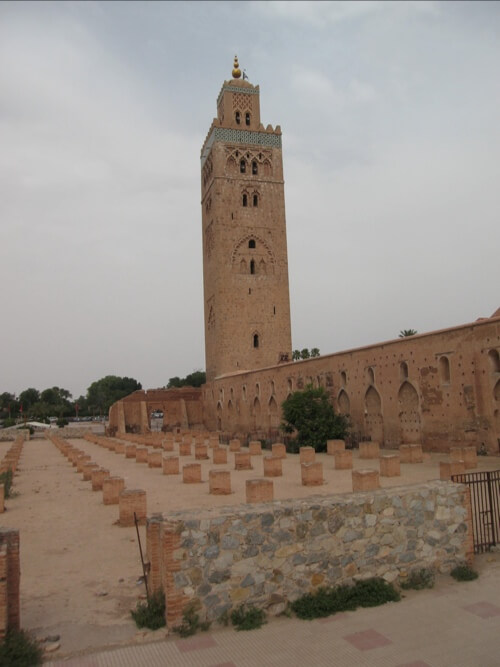 This is not it.  In fact, I am not sure what this is.  I thought this was the Palace el-Badi, but it turned out not to be.  The palace was impossible to find; I spent a lot of time wandering around and finally asked someone for directions.  He very nicely walked me to the palace,  but then, before I had a chance to look, he said “Come see this” he walked me to another palace.  And then another.  I just went with it, and before I knew it, I was walking all around the city.  I didn’t have my camera, so I have no pictures.  But I saw, what he said in his broken English, was the “Arab section”, the “Berber section”, and the “Nomad section”.  I don’t understand why “Nomads” have houses, but he said they were the richest of everyone, because they own so many camels, and camels are so expensive.   He was very excited to point out a door at one house, and claimed the door was over 800 years old.

Finally I got back to Jmaa el-Fnaa – the big square where Mommy later held the monkeys.   Its a pretty exciting place, with people dancing and the lots of orange juice stands and the monkeys.  There were also snake charmers: men who played musical instruments that a cobra would “dance” to.  Then one of them came and put a snake around my neck, took some pictures, and wouldn’t take it off until I tipped him! 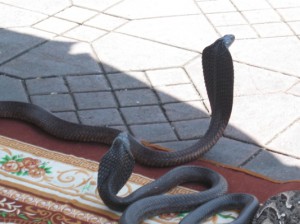 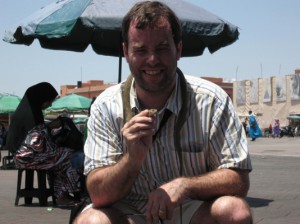 I think that is enough about Marrakesh.  By the last day Mommy was feeling better (which is when we saw the Monkeys), and we took an overnight train back to Tangier.  Then we immediately went to the ferry, and by mid-afternoon we were in Málaga, Spain.  And Mommy will tell you about it in her next posting.