Lemony Blueberry Crumb Pie is a delicious celebration of fresh blueberries and summer; the entire family devoured it and yours will too. Teeny’s Tour of Pie was sent to me for free in exchange for an honest review. Affiliate links were used in this post, but only to link to items I would be discussing and linking to anyway. 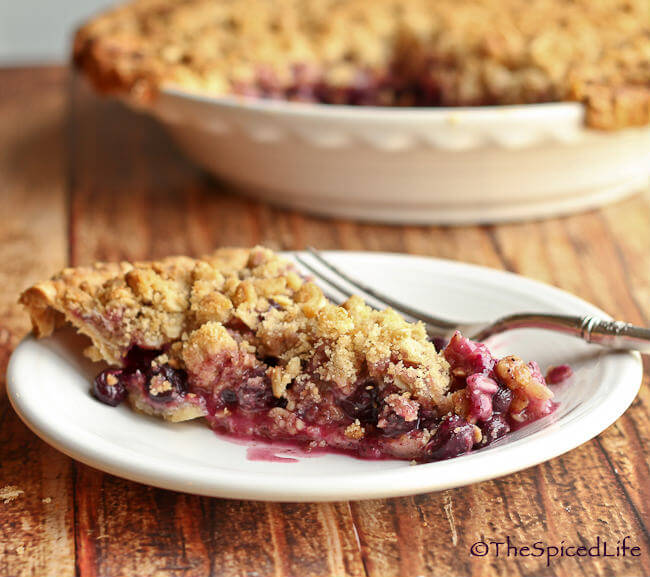 I have a lot to share and what feels like little brain cells with which to share it! I had some medical testing today which required general anaesthesia, so I may not be all here. But I cannot wait any longer to share this pie, and more importantly, this pie crust with you. Ad therefore the awesome cookbook that it came from as well.

Please be patient over the next few weeks. It currently looks like I am having a hysterectomy next Monday, so although I have a backlog of dishes and pictures, I may not be posting quite as regularly. 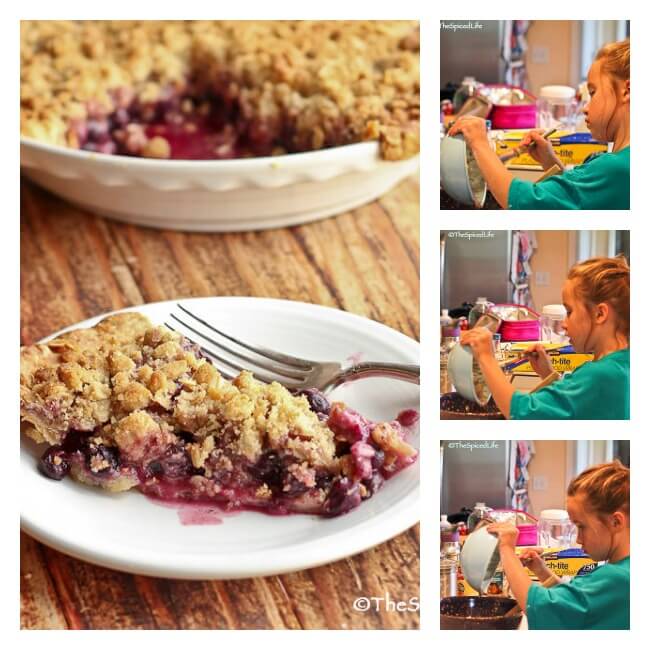 This pie starts with a kind of funny story. I had been sent Teeny Lamothe’s Teeny’s Tour of Pie: A Cookbook

by the publisher for reviewing. I instantly fell in love with the book and its quirky writing. Lamothe, devoted to pie baking, had passed on pastry school and instead apprenticed with master pie bakers all throughout the country. Her writing and pie descriptions are similarly unconventional, which I greatly enjoyed. But here’s the catch: I am totally intimidated by pie making (crust rolling). I was being optimistically adventurous when I told the publisher to send me the book, but day after day passed, with it in my “Books to Review” pile.

Enter Sammy. We had decided we were baking together, and I told her it was her pick. When she picked up the book I vetoed it… but then thought about how silly that was. So with Sammy’s prodding and encouragement, we decided to bake a pie! Of all the sweets on this site, I can honestly say this is the most excited and proud I have been of a dessert. Maybe it is because my mom is basically a master pie baker herself? I don’t know, whatever the reason, pies intimidate me and the fact that this one came together so nicely was thrilling. 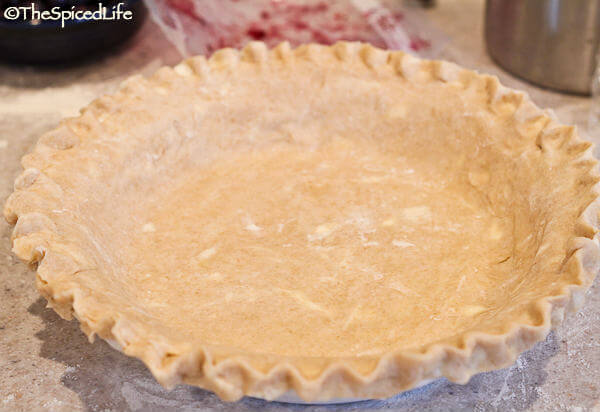 Some comments on the crust–and my only criticism of the book: to me, shortening is a travesty. I was shocked that Lamothe baked her way through the country and never encountered lard in pies. She does address it, saying she has no experience with it, but to me part of learning to bake crust should include lard–or maybe schmaltz in some pork-eschewing traditions. And when she does discuss it, she describes it as tasteless and odorless, whereas to me that means overly processed (leaf lard is described that way and is highly prized but I have never seen that for sale anywhere and I prefer the savory contrast of unprocessed lard). In my experience the very best lard is freshly rendered and smells slightly of roasted pork. That slightly savory quality lends itself beautifully to pie crust. So my pie crust follows her recipe exactly, except where she called for shortening I used lard and highly recommend you do the same if pork is allowed in your diet. And I recommend you find your lard at a traditional butcher or farmers’ market. 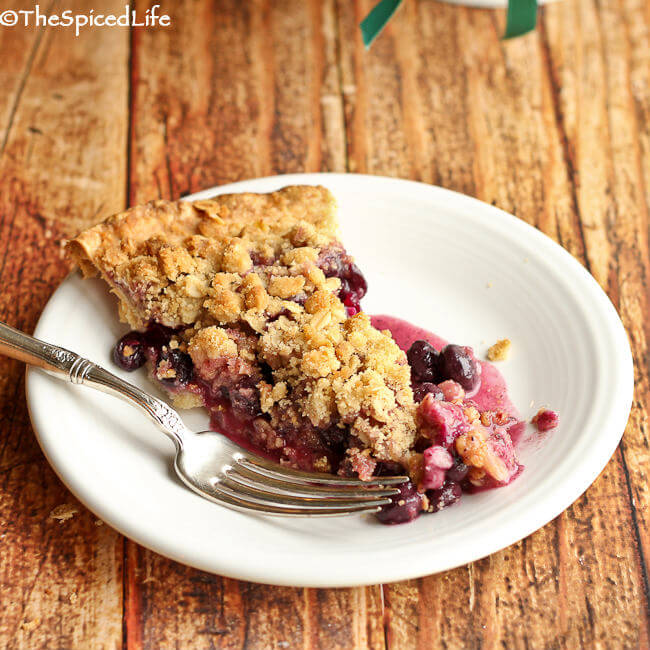 Speaking of the crust, I also highly recommend you let your kids (if you have any) roll out the extra and cut it into fun shapes. I did not take any pictures, but we actually enjoyed these cut-out “cookies” as much as the pie! We brushed them with beaten egg white and sprinkled them each with one of three different combinations: cinnamon sugar; rosemary and coarse sugar; coarse cocoa sugar. All three were delicious. And so, so flaky. Alex especially remarked upon it repeatedly. And that, if you are wondering, is from the butter and vodka in the pie crust. Butter promotes flakiness, because of the water evaporating from the butter at high heat (think croissants), and vodka, because it evaporates more quickly than water at high temperatures, aids in this. It especially makes using all whole wheat flour possible in terms of flakiness, which is why Lamothe uses it. 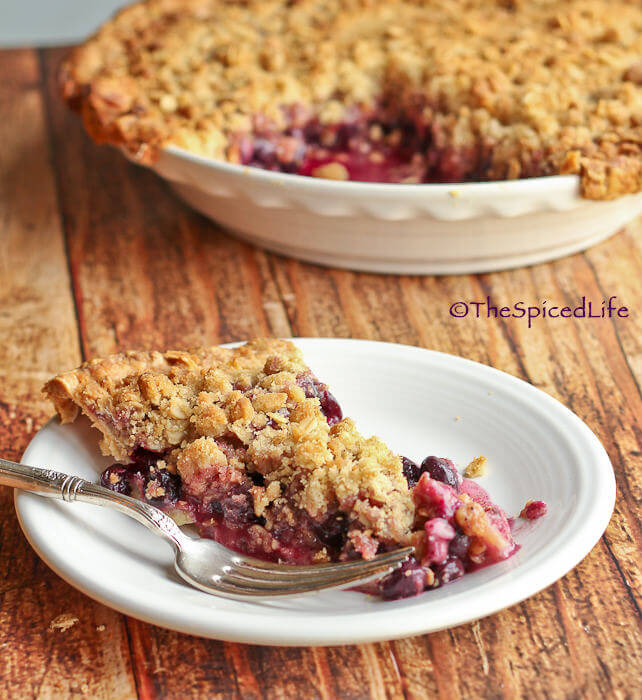 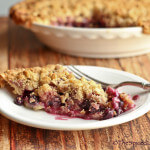 Print
Lemony Blueberry Crumb Pie
Recipe shared courtesy of Workman Publishing; from Lamothe: There are several options for topping this brightly flavored blueberry pie. If you like a crumb top, I highly recommend using the Oat-and-Nut Crumble on page 43. If you’d prefer your blueberries loud and clear, leave the pie naked and top it straight out of the oven with fresh blueberries and a tart lemon drizzle. If you do decide to make the lemon drizzle, you’ll want to prepare it in advance and refrigerate it while you assemble and bake the pie. Simply whisk together 1 tablespoon of confectioners’ sugar and 2 tablespoons of freshly squeezed lemon juice in a small bowl until it’s smooth. When I go the fresh berry–topped route, I also like to cut out fun shapes from the extra pie crust dough, bake them separately as crust cookies (see page 25 for instructions), and stick them on top later to create decorative scenes. Either way, it’s a wonderful summer pie!
Course: Dessert
Cuisine: Pies
Author: TheSpicedLife
Ingredients
Instructions 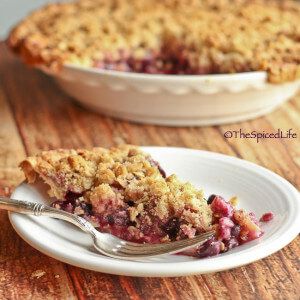 One note about the crumble topping: you can substitute any nut you prefer for the almonds, so Sammy and I decided on pecans.

5 from 3 votes
Print
Oat-and-Nut Crumble
Recipe shared courtesy of Workman Publishing; from Teeny Lamothe: This recipe calls for almonds because they happen to be my favorite nut to add to a crumble; they are light and slightly sweet without being overwhelmingly nutty. If almonds aren’t your favorite feel free to use a quarter cup of your nut of choice; both pecans and walnuts are tasty options. If you’re allergic to nuts, leave ’em out completely and add an extra quarter cup of oats.
Course: Dessert
Cuisine: Pies, Toppings
Author: Teeny Lamothe
Ingredients
Instructions
5 from 3 votes 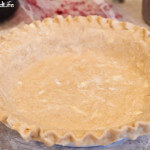 Print
Whole Wheat Crust
Recipe shared courtesy of Workman Publishing; from Teeny Lamothe: Whole wheat crust is my go-to for nearly every pie I bake. Whole wheat flour is slightly more challenging to work with because of its low gluten content, but adding vodka to the mix makes for a wonderful, workable dough. I keep my (cheap) vodka in the freezer and the chill of it serves to cool down the rest of my ingredients as I mix the dough together. If you have made pie crust before, you might wonder about the amount of liquid I call for here; I have found that whole wheat flour requires a little more liquid to come together into a ball of dough. This recipe makes enough dough for a nine-inch top and a bottom crust. If you need only a bottom crust, you can freeze half of this recipe for up to 3 months (see page 26) and save it for later.
Course: Dessert
Cuisine: Pies
Author: Teeny Lamothe
Ingredients
Instructions 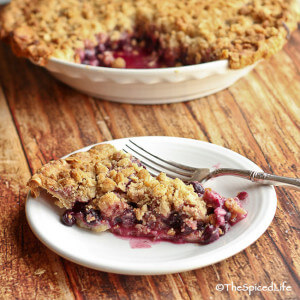