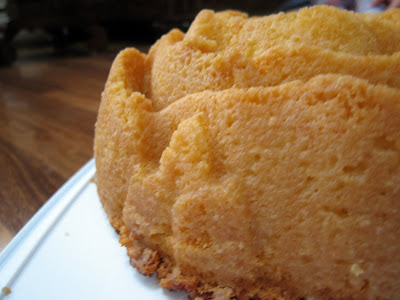 As far as I can tell every baker I know–or every cookbook-collecting baker, maybe not my mom who buys about 1 cookbook per year–has run out and bought a copy of Shirley Corriher’s Bakewise. So how could I do otherwise? I got a good deal on it, which was happy given that I try to limit myself to only buying used cookbooks.

Anyway, the first section I read was her section on pound cakes, given my affection for bundt cakes. I wasn’t sure what to make of it–well not her writing, that I found fabulously entertaining and full of useful information (which is not an automatic for me anymore, given the number of baking books I own). But lordy the ingredient list was long.

Then I was at a friend’s house, to which the guests had brought snacks and dessert, and a colleague of John’s had brought her bundt cake. It was plain and unadorned–the kind of bundt I rarely make.

I think I had 4 pieces. Maybe 5. Or maybe I stopped counting. 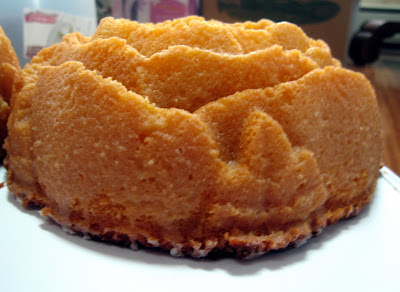 OK now that you know of my shameful gluttony, you will understand why I had to make this cake for my grandma’s funeral, even if it was not tried and tested. I was pretty proud of how far my baking knowledge has come when I bit into it and instantly knew it was a whipped cream pound cake–but other than that I had no idea what was making it so fabulous. According to Shirley it was the whipped cream, extra egg yolks, some oil (with butter and shortening–now you see what I mean about ingredient list), and the most interesting of all, potato starch. 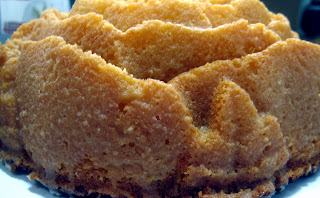 My cake came out differently from Keith’s for 2, possibly 3 reasons: I added orange zest (because I never could leave well enough alone) and I chose to use Shirley’s glaze on the cake so that it would keep longer. A 3rd possibility is that Keith did not use a nonstick bundt pan–something I plan to investigate, because his cake had a fabulous crust on it that mine did not. I don’t regret the glaze because it did indeed trap all that moistness within, but the truth is that I preferred it without the glaze with that amazing crust. But as you may have seen in the comment section of the Double Chocolate Peppermint Chocolate Chip Bundt Cake post, this cake ran neck and neck with the Ultra Lemon Bundt Cake for favorite status, so clearly everyone else was just fine with the glaze.

One last note: my sister hates almond extract. I thought to myself it is just 1/4 teaspoon buried in vanilla and orange zest, surely it plays a supporting role and will not be noticed. No such luck–she took one bite and said to me, in very ominous tones I might add, “Does this have almond extract?” If you have one of these people in your life, may I just recommend leaving the almond extract out?

As with the chocolate bundt cake, I apologize for the photos. Taking pictures after a funeral is an awkward thing to accomplish. 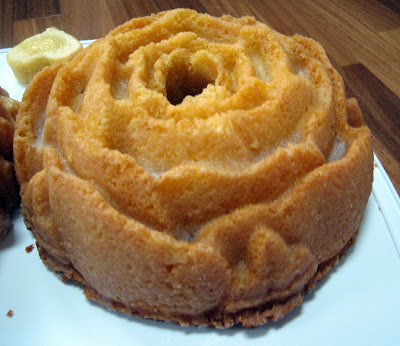 Place a shelf in lower third of oven and heat to 350 degrees. Spray a 10-inch tube pan or 12-cup Bundt pan very well.

Using a mixer at medium speed, mix butter until smooth. Add shortening and mix until fluffy, about 3 minutes. Add sugar and mix until smooth; touch outside of bowl to make sure ingredients are still cool. If not, place bowl in freezer for 5 minutes. Mix in extracts and zest. A little at a time, mix in oil. At lowest speed, mix in egg yolks. One at a time, mix in eggs.

In a bowl, using a whisk, mix flour, potato starch, baking powder and salt for a minute until well blended. At lowest speed, mix a third of flour mixture into butter mixture. Mix in a third of buttermilk. Repeat until all are incorporated, scraping down bowl at least once.

Whip cream in chilled bowl until soft peaks form. Mix a quarter of whipped cream into batter, then fold in remainder just until combined. Pour batter into prepared pan. From a height of 4 inches, drop pan on counter to knock out bubbles. Smooth top.

Bake until a toothpick inserted into center comes out clean, 65 to 70 minutes. Cool in pan on rack 10 minutes. (Glaze recipe below–glaze the cake after inverting, while it is still warm, if you use the glaze) Invert onto rack to finish cooling.

In a small saucepan, heat all ingredients until the sugar has completely dissolved, medium heat. Brush and rebrush onto the warm cake until the glaze is absorbed.