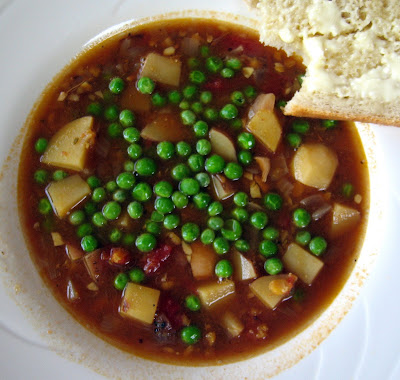 Mulligatawny is one of those recipes that is everywhere–and no 2 recipes look the same. As far as I can tell, the only agreed upon fact about mulligatawny is that it is a fusion of British and Indian cuisines–and actually cooked more by the British, I believe, at least originally. It is a good example of the kind of recipe I take as inspiration–and then literally do not follow a single step of it.

That was my plan today–and in not following a recipe I did follow my plan. But otherwise I did not follow my plan, because my plan did not consist of mistaking my bag of fennel seeds for cumin seeds.

Yikes. A full tablespoon of the suckers!

The fennel seeds actually worked out fine–but the almost sweet warmth (although the soup is not sweet) they added to the stew pretty much limited me in terms of what other spice blends I might have tried. Also, I had not originally been planning on adding the mustard seeds, but I really wanted something, in addition to the cumin seeds, to temper the fennel, and they seemed like a good choice. Plus I love mustard seeds. 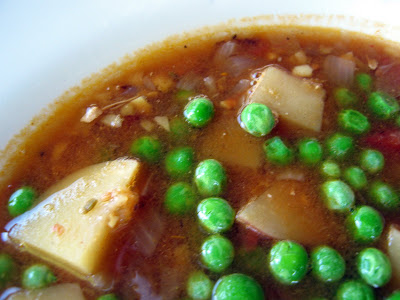 The final result was stellar. It was like an Indian flavored Anglo-American vegetable soup. As a matter of fact, it reminded me of my mom’s Beef Vegetable soup enough that I wished I had used beef. I don’t know if it was the spicing, the stewing of bone-in chicken in stock, or what, but the resultant stock was very rich–my husband actually thought it was beef. I think next time I would reduce those fennel seeds by just a bit though as their flavor got more pronounced the next day.

The 2 stars for me in most Indian dishes are potatoes and peas, and this dish was no different. Either alone is a bit boring, but there is just something about potatoes and peas with Indian spices that makes me really happy. Whether it is in a samosa, an aloo mattar curry, or this soup, I am all over it. I am a bit compulsive about not overcooking my peas–I prefer to toss frozen peas on top of the soup as a garnish, rather than risk overcooking the peas–especially in leftover form. Plus it adds such great color! 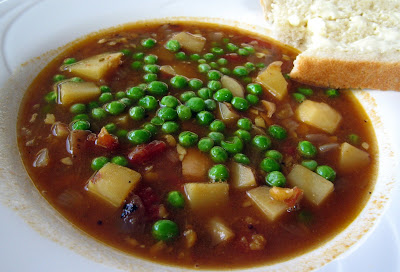 Combine the split peas, water and cinnamon stick in a medium sized pot. Bring to a boil, cover and let simmer until the peas are tender–maybe 30-45 minutes. Add the lentils and cover and set aside. The lentils, which cook very quickly, will cook enough in the hot water.

Heat a large heavy pot (I used a 7 qt dutch oven) over medium high heat. Add the oil and ghee; when it shimmers add the chicken breasts, skin side down. Brown the chicken, and then remove it and set aside.

Add the mustard seeds to the pan. When they start to pop, add the fennel and cumin seeds. Stir and let them roast, 15-30 seconds (do not let them burn). Add the onions and sprinkle a pinch of salt over them. Cook the onions until caramelized, maybe 20 minutes, stirring occasionally. Turn down the heat to medium if necessary. Add the ginger and garlic toward the end and continue cooking.

When the onions are browned and caramelized, add the tomato paste, curry powder, cumin and coriander (and cayenne if you want heat–I just always serve it on the side these days). Toast briefly and then add the tomatoes. Add the potatoes and chicken, skin side up, and pour the stock in. Bring to a boil and simmer for about an hour, uncovered, stirring occasionally.

When the chicken is cooked, remove it and set aside to cool. When it is cool enough, shred it and add the shredded chicken back into the pot. Add the lentils and split peas, including the cooking water and cinnamon, and continue cooking until the potatoes are done (or longer, barely simmering, if you want to start earlier in the day–I frequently do this if I have other stuff I am cooking that is less time flexible). Leave uncovered if the soup seems watery. Before serving add the lime juice, the garam masala, and salt to taste. If you use a homemade stock you may need to add a fair amount of salt. Serve with flatbread or rice, as they might in India, or crusty bread, as the British might. We clearly went for the crusty bread–which I then stole from John after he took a bite out of his for the photos!