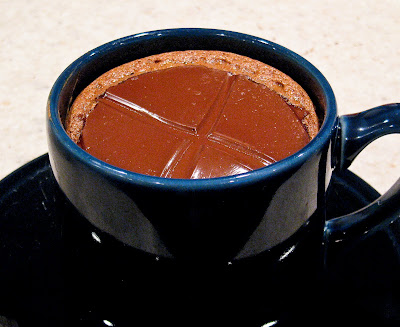 John’s birthday used to be a grand affair. Four days before Valentine’s Day, we usually skipped that holiday in favor of a celebratory dinner for his birthday. Now by big I do not mean rollicking parties or anything, but it used to be I would make no less than 3 S.E. Asian main dishes and some sort of fabulous dessert. Here is an example from the beginning of my blogging days (‘scuse the photos). But then our babies became toddlers. And they brought germs into our lovely home. 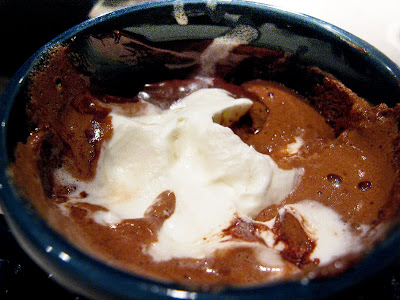 OK that’s not fair, I’ve always been a germ magnet, with or without kids. But seriously, our Februaries have sucked since Alex hit 3. Last winter, I finally gave up on making John a dinner and served him his dessert (which I had made in advance) on a regular weeknight long after his birthday. So when we finally made him his meal this year, once again long after his actual birthday, he claimed it was a year and a month late–but even he could not deny that he was happy that it happened at least! 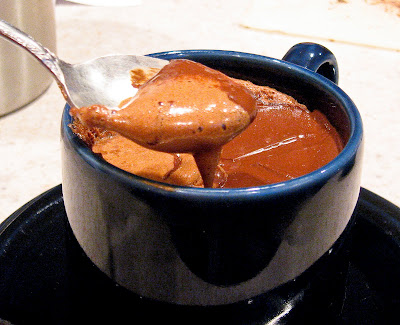 John’s favorite dessert–or one of them at least–is anything made with chocolate mousse. I felt like we had done a lot of mousse recently (once for John, last winter, and then for Sammy this past fall and Alex of course had worms in mousse dirt cups for her birthday). So I was looking for something a little off the beaten path when I found this La Mousse Légère au Chocolate Chaud (unfortunately the site it came from no longer seems to be up).

It is basically a chocolate mousse that is quickly baked in a hot oven with a chocolate disc on top of it. It had in its favor also the fact that it is an egg-based mousse, whereas all of my experience is with chocolate mousses that are made with whipped cream. And you know me and how I feel about repeating myself. 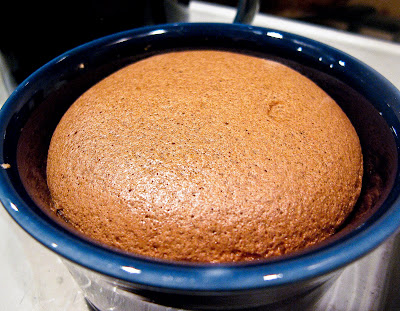 The verdict on baking a mousse? Well, John loved it, but actually preferred it the second night, chilled (we had leftovers). For ease nothing beats a whipped cream based mousse, but I suspect for lightness nothing beats an egg white based mousse, so I definitely liked that part of it. As for the served hot part, it definitely made it different and it was definitely a fun change. I suspect I would ask for it a minority of the time but I would ask for it–did that make sense? It was fabulous but I still basically prefer a chilled mousse. I am sure also it did not help that we had it in early March as the temperatures have risen and our thoughts have turned to sunny days spent outdoors. Whereas curled up in front of a fire during a mid-February snowstorm this would have really hit the spot (actually we don’t have a fireplace, but you get the idea). 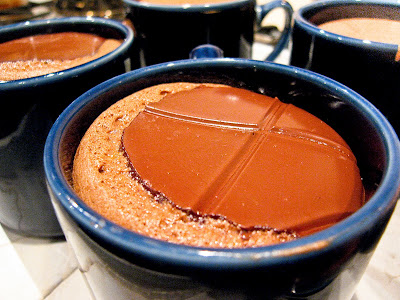 200g dark chocolate (61% cocoa; they call for Valrhona but I used Scharffenberger)
80g butter
6 egg yolks
25g sugar10 egg whites
100g sugar4 thin chocolate bars, 2 circles slightly smaller than cup/ramekin size cut out of each (I did this by SLOWLY warming the bars in the microwave on 10% power, then pressing a smaller glass into the chocolate and then cutting with a knife around that indentation)–optional

Melt the butter and chocolate together in the microwave on 50% power in 30 second increments, stirring in between. When it is totally melted set aside to cool a bit–you want it to feel just barely warm. 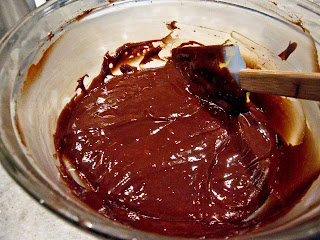 In the meantime, whisk together the egg yolks and the 25 grams of sugar until they are foamy and when you life the whisk (or whisk attachment), the mixture leaves ribbons on the surface that do not immediately reabsorb into the mix. Set aside. When the chocolate is the correct, barely warm, temperature, fold the yolk mixture into it. Set aside. 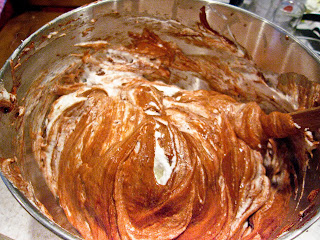 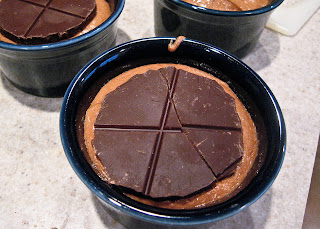 Of course I took a photo of the one with a broken disc and never noticed. Just pretend it is whole!

Using oven proof mugs or ramekins (I used 4 larger mugs and 4 small ramekins for adult and kid sizes, and put the larger ones in 1 minute early), divide the mousse between 8 containers. Place them on a cookie sheet. Place one disc of chocolate on top of each individual serving. I only did it for 4 of them, but while I found the chocolate unnecessary when served chilled (we had the leftovers that way), I liked it when served warm. John preferred them plain. So know that you can skip the chocolate on top if desired.

Bake for 6 minutes. Serve warm with whipped cream if desired (we always desire). 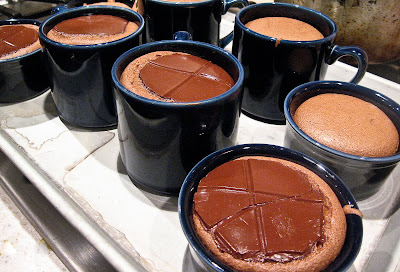