You are here: Home / blog events / Interview with Faith Gorsky of An Edible Mosaic 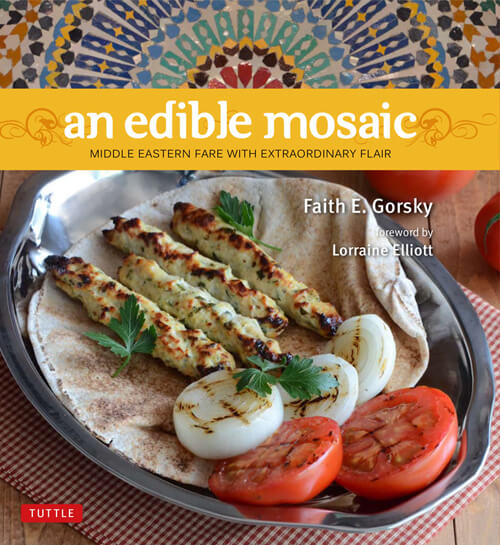 Our Cookbook Tour project is slowly winding up. It has been so much fun–not to mention delicious–promoting Faith’s An Edible Mosaic: Middle Eastern Fare with Extraordinary Flair. To put the frosting on the cake, so to speak, Faith answered sme questions for me that I thought might be of interest to my readers. Everyone involved in the Cookbook Tour will be posting interviews, and one of the things that I love about the group of bloggers involved in this project is that we have all brought very unique, individual perspectives to this project and to Faith’s food. As a result, I think our interviews have all (so far) been quite unique.

1. What was your experience with Middle Eastern food before meeting your husband? Did you like it? Did you cook it?

I loved Middle Eastern food from the first time I tried it, but up until the time I got married, I had very basic experience eating it – things like hummus, falafel, kebab, and baklava. After marrying into a Middle Eastern family, I started cooking Middle Eastern dishes after I learned how to make them authentically from my Syrian mother-in-law. 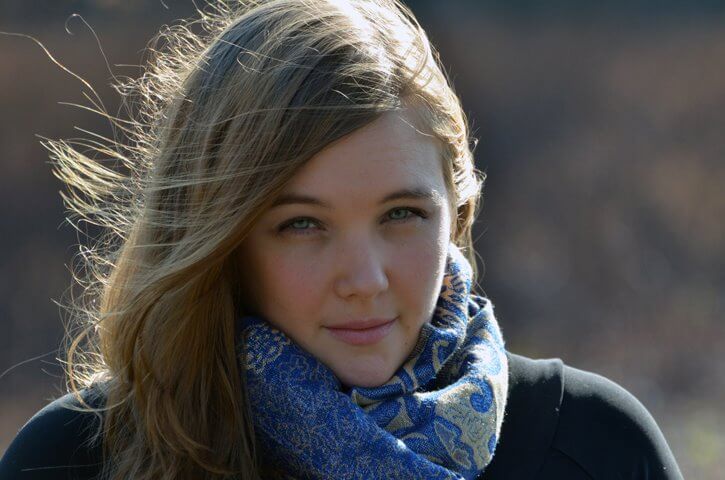 2. My family–the family I grew up with, I mean–is more adventurous then they used to be, but my cooking is a source of amazement to them, seeing as I grew up with a very basic Midwestern and Italian American diet. How do your parents (and siblings?) feel about the way you cook now? Do they enjoy Middle Eastern food? If not, how have you handled that?

Growing up my mom was a wonderful cook. Every night she’d make sure there was a hot meal on the table for dinner, and classic American dishes like roast chicken, beef stew, or tuna casserole were her specialty. Of course my family loves traditional American foods, but they are also very open to trying new things. As I learned more and more new Middle Eastern dishes and made them for my family, they not only fell in love with the cuisine, but also felt a strengthened connection with my husband.

3. Piggybacking on the previous question… our diet is almost completely international at this point, but at (traditionally American) holidays I still feel compelled to revert to Anglo American dishes, especially when hosting my family (my in laws are more adventurous). Do you cook Middle Eastern dishes at these times or American dishes? Do you change it up depending on which family (yours or his) you are hosting?

My hubby’s parents still live in the Middle East, so holidays are all spent at my parents’ house. My hubby and I celebrate both Muslim and traditional American holidays, and we make mostly classic foods for each. For example, during Ramadan we usually start iftar each day with red lentil soup (or some variation), and on Thanksgiving we make a big turkey dinner with a variety of classic side dishes (like mashed potatoes, candied squash, green bean casserole, etc.), along with a couple other Middle Eastern sides that Mike likes to eat along with turkey (usually Rice with Toasted Vermicelli Noodles, which he eats with turkey and gravy, and Saffron Rice with Raisins and Pine Nuts, which he eats with turkey and no gravy).

4. When you are cooking a Middle Eastern meal, do you tend to choose different dishes based on how familiar your diners are with Middle Eastern cuisine? If so, what dishes do you prefer for the more experienced and which for the novices?

If someone is coming to my house to have Middle Eastern food for the very first time I usually make Chicken Shawarma (assuming they eat meat; if they are vegetarian, I usually make Mujaddara, which is a Lentil and Bulgur Wheat Pilaf with Caramelized Onion). After a meal of flavorful Chicken Shawarma wrapped in fresh flatbread with homemade garlic mayo (and homemade pickles, if I had time to make them in advance!), and maybe a simple Middle Eastern chopped salad, they’re hooked on Middle Eastern cuisine. 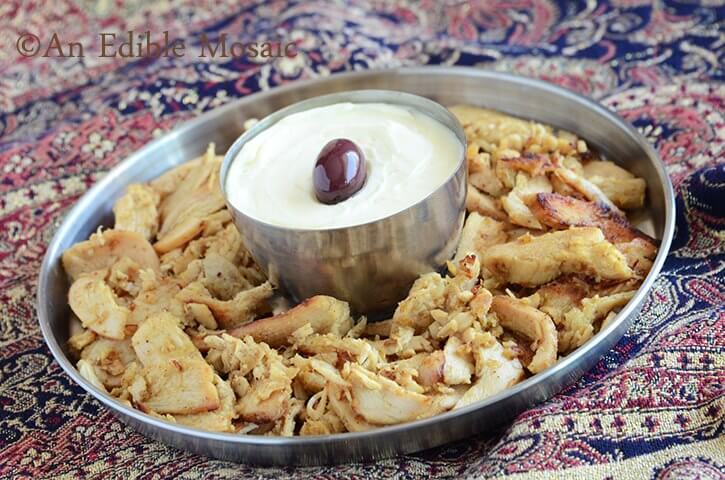 If I’m cooking for people who are already familiar with Middle Eastern food, I am definitely more adventurous with what I make. It might be something like Kibbeh, Stuffed Grape Leaves (Waraq Ainab), Upside-Down Rice Casserole (Maqluba), or Cauliflower Meat Sauce (M’nezalit Zahara). For my hubby and I (and the truly adventurous souls or real lovers of Middle Eastern cuisine), I make things like Jute Mallow Soup (Molokhia), Lamb and Yogurt Soup (Shakreeyeh), or Sumac-Spiced Chicken (M’sakhkhan). 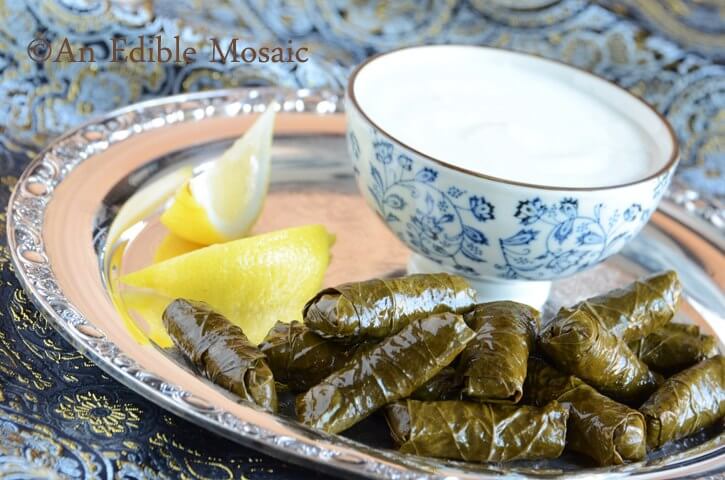 A few of my favorite Middle Eastern cookbooks are (Laura’s note: I own the first 2! Yay!):

by Mourad Lahlou
2) Saha: A Chef’s Journey Through Lebanon and Syria

by Greg and Lucy Malouf
3) The Complete Middle East Cookbook

The first two books that I mentioned above are wonderful not only for their recipes (including both classics, as well as fresh, updated dishes using classic flavors), but also for the tidbits of culture that they include. The third book listed above is a hugely comprehensive cookbook with a tremendous scope spanning across many countries in the Middle East and surrounding areas.

A few of my favorite non-Middle Eastern cookbooks are:

1) Betty Crocker’s Cookbook, New and Revised Edition, 1981: This is my favorite cookbook of all time, and I can’t even recount the hours I spent poring over it. This is the cookbook I grew up watching my mom cook from, the cookbook that meant dinner would be wonderful when it was pulled off its shelf. The recipes in it are classic American dishes, and to me, they represent the cozy comfort of a meal cooked by my mom. The book is much more than a collection of recipes though – it’s a little bit of American culture too (it has a whole section devoted to TV dinners, including recipes, storing information, reheating tips, and instructions on how to make your own foil TV dinner). It’s also a great tool for people who want to learn how to cook but don’t know where to start; for example, it has useful information on herbs, various cuts of meat, and even how to garnish your dishes.

2) Mastering the Art of French Cooking by Julia Child, Louisette Bertholle, and Simone Beck: Again, this is a nostalgic pick for me; this is the book we cooked from during French Club in high school. Whether it was Potage Parmentier, Coq au Vin, or even just Crepes, cooking from this book always meant magic. To this day, if I’m looking for comfort food for a special occasion, I usually pull out this book.

3) Joy of Cooking by Irma Rombauer and Marion Rombauer Becker: This was one of the first cookbooks I added to my collection and definitely one of my most utilized cookbooks, mainly for the simple reasons that 1) it is a huge collection, and 2) I’ve never come made a recipe from it that didn’t turn out well.

4) I also love cookbooks about ancient or old-world cookery; a few of my favorites are: European Peasant Cookery by Elisabeth Luard, Roman Cookery: Ancient Recipes for Modern Kitchens by Mark Grant, and The Medieval Kitchen: Recipes from France and Italy by Odile Redon.

6. Are you planning a second cookbook?

Yes! It is almost done actually, but I can’t give out the details yet…soon though, I promise!

7. I know that I have had a tendency to incorporate certain things that I have learned from other cultures into my “regular” cooking. For example, I make so much Indian food, which usually starts with super browning onions, that I almost always disregard instructions to barely sweat onions, etc. I can’t help it, I just like that super browning too much. Do you have any quirks like this, stuff you have learned from learning to cook Middle Eastern food that you incorporate into all of your cooking? 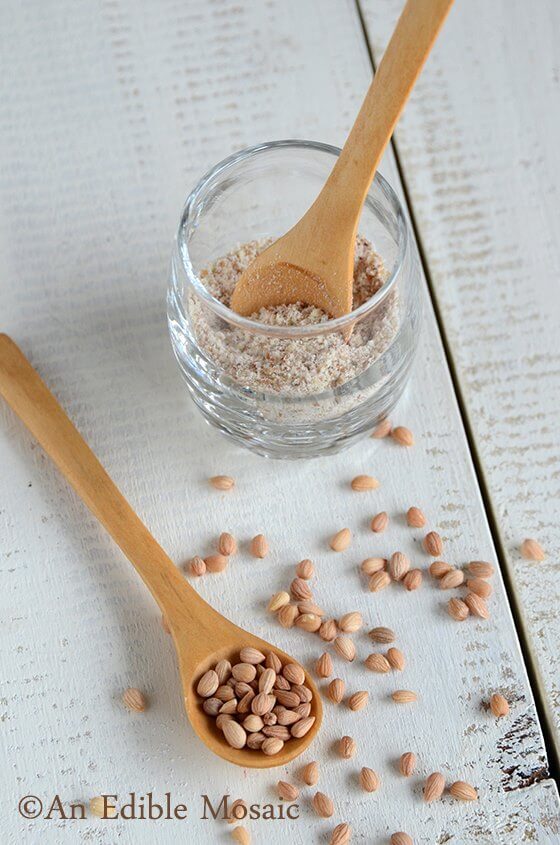 Yes! I never make anything with cherries anymore without adding a bit of mahlab (for those unfamiliar, mahlab is the ground spice from the kernel of St Lucie cherries; it’s beautifully aromatic, smelling both of cherries and almonds). Also, I always use my mother-in-law’s method for cooking rice (that I discuss in my cookbook) any time I make any rice dish; it consistently yields the perfect pot of fluffy rice. Additionally, I like to add just a touch of pomegranate molasses in any barbeque dish I make (whether it is grilled chicken, barbeque baked beans, or anything else); it adds a deep, complex sweet/tart flavor. 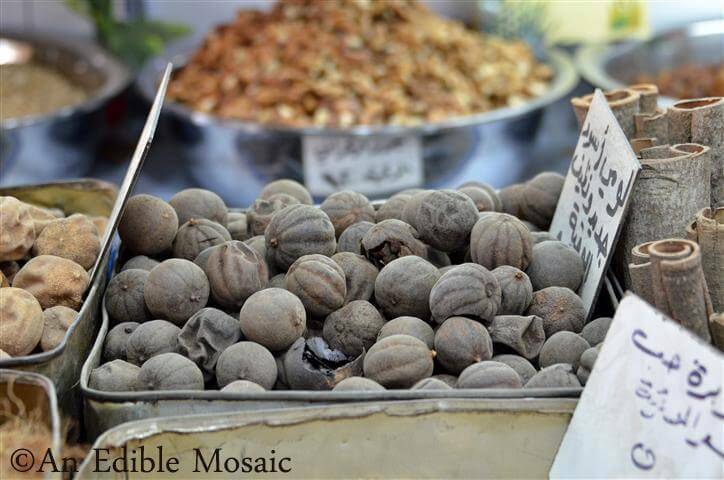 There are so many…essences (like rosewater and orange blossom water), grains (freekeh and bulgur), spices and spice mixes (cardamom, mahlab, 9 spice mix, etc.), and fridge staples (like tahini and pomegranate molasses).