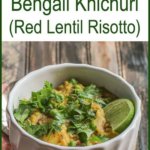 Instant Pot Bengali Khichuri (Red Lentil Risotto) is super easy and delicious Indian comfort food that comes together quickly thanks to the pressure cooker function. A copy of Instant Indian was sent to me in exchange for an honest review; please read through to the end for giveaway details. Affiliate links have been used to link to items I am discussing. 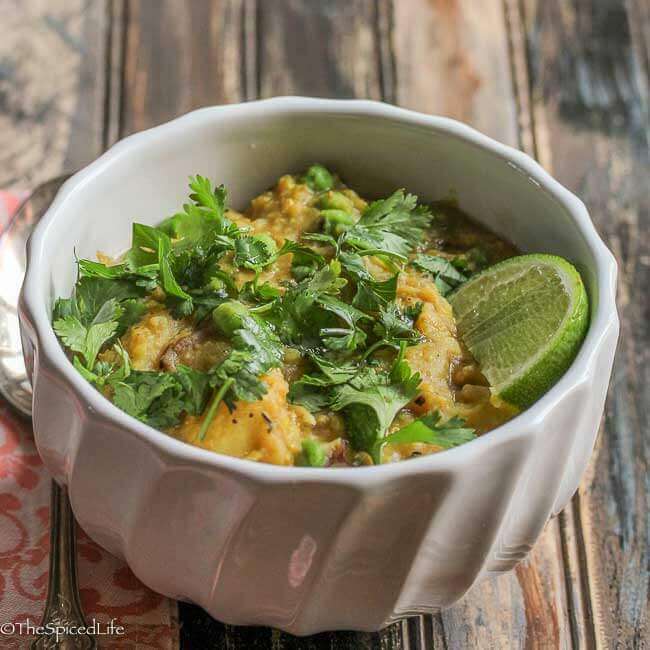 I owe Rinku Bhattacharya and Hippocrene Books some big apologies for how long it took me to get to this cookbook review. I actually made the dish quite a while ago, but in the meantime I had another curve ball come at me, yes more from that lung CT scan and all of its various nodules. And I have actually never been so grateful for a diagnosis in my life. Why? Because thyroid cancer is completely curable as long as you catch it and get rid of the thyroid. And apparently I lied when I said we needed to wait for the removal to find out if it was cancer. The nodule sitting on my thyroid is definitely malignant. Which is both freaky and silly. Freaky, because, well, cancer. But silly because this kind of cancer just does not bring to mind the kind of suffering that most cancer brings on. No chemotherapy, is super slowing growing, excellent prognosis from the get-go, etc. As my sister said, it is cancer with a little c. But it is still distracting and bringing about a ridiculous number of doctor’s appointments, so I am super sorry for the delays. 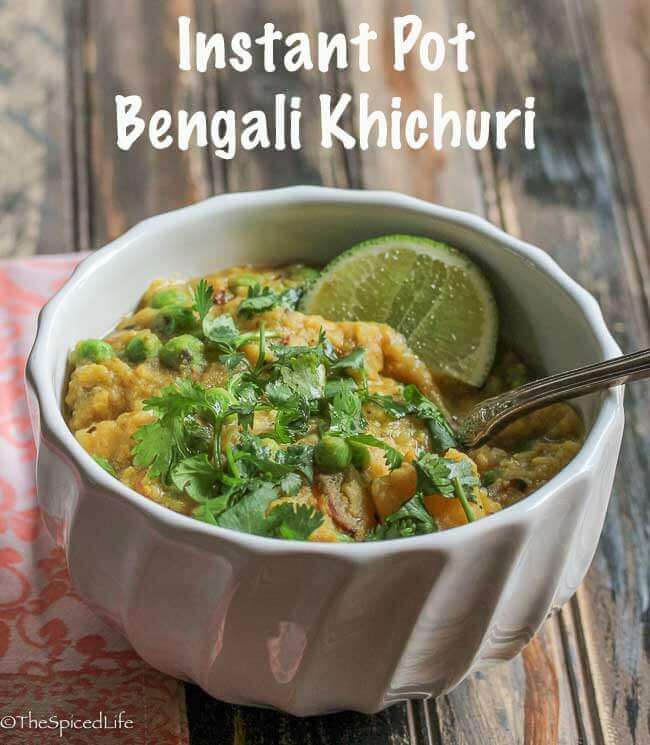 The delays are extra silly in this case because Rinku Bhattacharya’s Instant Indian: Classic Foods from Every Region of India Made Easy in the Instant Pot

is all about being fast and easy. And if food blogging was only about making the meal, I would have gotten this to you a lot sooner. But sitting down to work on my blog is what has been difficult lately. And focusing. And, uh, if I am totally honest there was some delay because I had to open the Instant Pot out of its packaging and figure out how to work the darn thing!

Having never owned a pressure cooker before, it was daunting–to me anyway. I always envisioned risking exploding the house or something with a pressure cooker (I know my sister is rolling her eyes at me as she reads this). But it actually was quite easy–after the first time. The first time I used it, well, I really wish someone had showed me this article about including cooling time when figuring out how fast the instant pot will work for you. Suffice to say that first meal was a frustrating disaster. I had no idea it had to cool down so slowly. But once I figured that part out, I have really enjoyed it, for dried legumes especially. 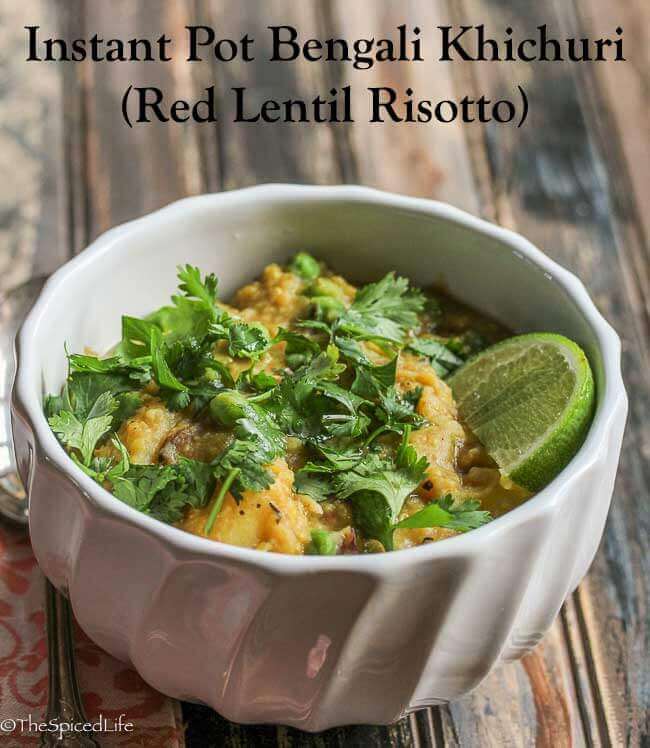 Which brought me to opening Instant Indian. Unsurprisingly I want to make everything in it. I love Rinku’s cookbooks–you can check out my reviews for The Bengali Five Spice Chronicles and Spices and Seasons. And for an Instant Pot “newbie,” all of the directions have been broken down and super clear. No confusion about time to cook versus cool down for example. There is a part of me that finds sautéing in the Instant Pot silly–truthfully by using that function my entire kitchen ended up smelling of onions whereas if I had started in a nonstick skillet I could have done it under the hood. But that is just personal preference regarding using the Instant Pot and not on Rinku. Indian food is a natural fit for the Instant Pot–and indeed Indian cooks use pressure cookers regularly in a way most American cooks do not, I suspect because of their love for such a wide variety of dried legumes. And that is how I see myself most likely to use my Instant Pot. As a horrible night owl, I never seem to wake up early enough these days to get a pot of dried beans cooking in time for dinner–nor do I ever remember to start soaking the night before. But rest assured if dried beans are not your thing, the cookbook has tons of meat, seafood and poultry recipes from all over India as well. And the really great news? The publisher is giving away a copy of Instant Indian to one of my readers! [The giveaway is now over but I still really recommend the book!]

The publishers sent me a pamphlet before the actual cookbook arrived, and I made the Khichuri from that pamphlet. I have made khichuri two other times, and on this blog, but khichuri, sometimes called khichdi and sometimes spelled khichari, is one of those basic template dishes that has a different variation in almost every corner of India. The first one I made, Aparna’s Manipuri Khichdi, basically seemed more like a rice pilaf to me at the time (this was less than a month after starting the blog so the pictures are atrocious and I knew a lot less about Indian cooking than I do now). The second was a very distinct Gujarati khichari, with loads of dill–and where I discovered that Alex has an aversion to dill bordering on insane–much to my horror. It is also where I learned that no matter the corner of India, khichuri is generally consider simple comfort food, easy on the stomach. Rinku’s Bengali Khichuri is softer, less of a pilaf and more like a thick Indian cousin to congee or Filipino Arroz Caldo with legumes and spices.

I mention the pamphlet because the recipe changed ever so slightly from the pamphlet to the cookbook. The pamphlet included the option of using brown rice, which I tried to do. And my cauliflower more or less disintegrated despite being pretty large florets. I am guessing that is why the option of brown rice disappeared–if you are set on brown rice, you will need to double the actual cooking time– and I recommend leaving out the cauliflower and roasting it separately. Or leave it out completely and serve the khichuri with a small salad for veggies. As for me, I would just use white rice the next time, as I would argue that a half cup of (uncooked) white rice in the entire dish is not that much (if you are worrying about the health benefits of white versus brown rice). The only other change I made from the recipe as shared below (the exact recipe is shared with the permission of the publisher) was to add some thinly sliced red onion to the tempering oil at the end. Mostly because I love onions that much, even if I don’t love my kitchen smelling of them. 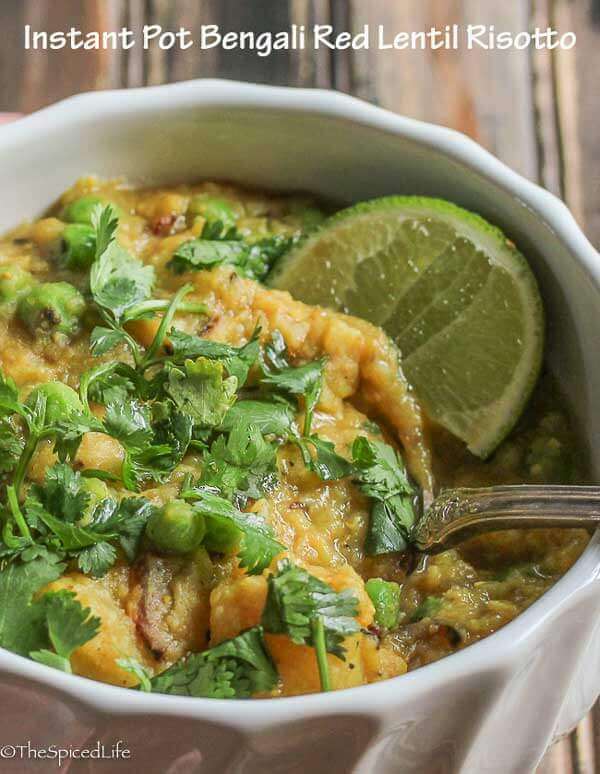 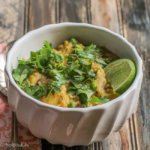 From Instant Indian, shared with permission: A khichuri (or khichdi) is a classic rice and lentil mélange, prepared differently all over India. This particular red lentil variation is from Bengal. It is distinct in its use of fried onions to imbue rich flavor and cauliflower, potatoes, green peas, and a beautiful drizzle of cumin-scented ghee round out this hearty, comforting dish. To make this dish vegan, you can use coconut oil instead of the ghee.

Looking for a Instant Pot Bengali Khichuri collage to pin? 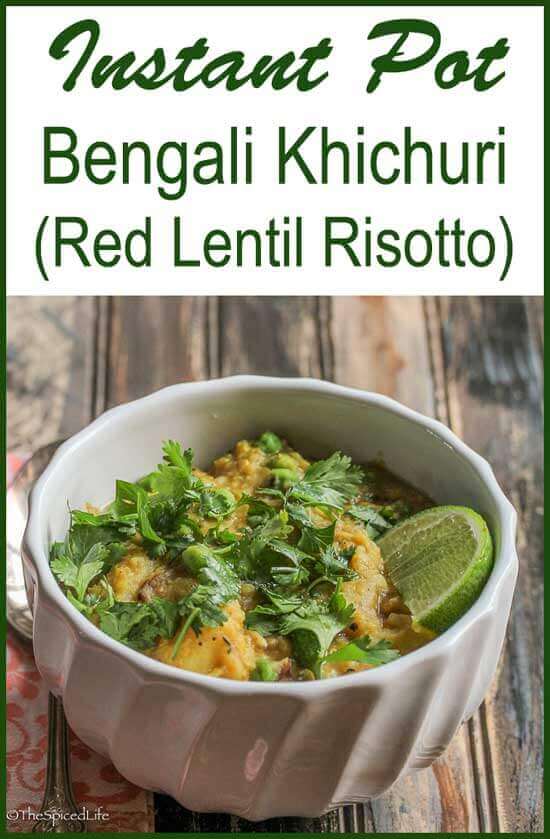