You are here: Home / beef / Indonesian Coconut Beef Soup with Carrots and Sambal; Review of In Her Kitchen

The recipe for this Soto Betawi, or Indonesian Coconut Beef Soup, comes from a grandmother in Jakarta, Indonesia, and is perfect for anyone who loves coconut milk based dishes. I was sent a copy of In Her Kitchen by Blogging for Books in exchange for an honest review, and all opinions are my own. Affiliate links have been used to link to items I am discussing. 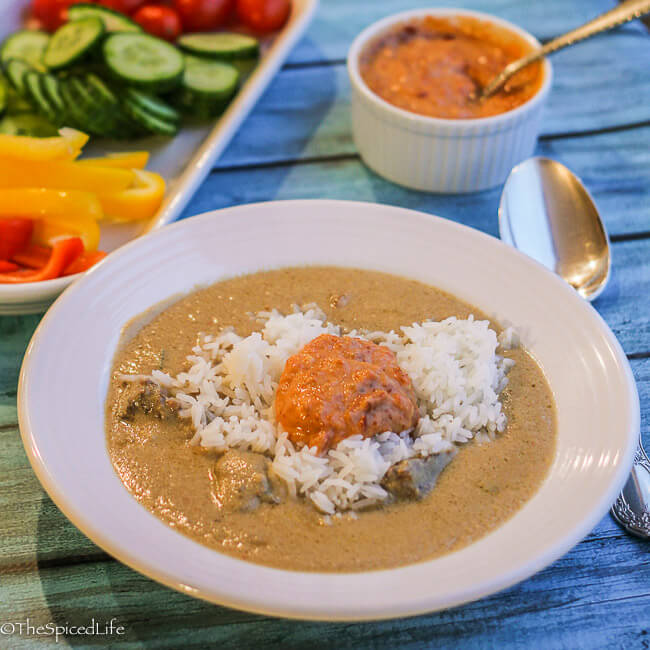 What could possibly be better than learning how to cook traditional dishes from around the world (to this cook anyway)? Learning how to cook those dishes from grandmothers from those countries! Preferably right there in their kitchens with them, but obviously that is not likely to happen. In Her Kitchen: Stories and Recipes from Grandmas Around the World

by Gabriele Galimberti is a wonderful second best option– a dream cookbook for a person like me!

If you feel at all similarly about grandmothers and cooking, this is the book for you. Truly. Photographer and author Gabriele Galimberti had the idea after sitting down to eat with his own grandmother on the eve of a photography trip, so in many ways this is a series of portraits of cooking grandmothers around the world more than a cookbook from a famous cook that you will return to again and again to cook from. Which is not to say that you will not cook from it–I have quite a few recipes bookmarked–but is rather just to say that you will love this cookbook even if you never cook a single dish from it. Each grandmother is photographed with her ingredients for her dish, and each recipe has a substantial headnote with quotes from the grandmother who shared it.

One of the best– and hardest– things about the recipes in this book is that they are quite traditional and unfiltered for Western audiences (those recipes not from Western grandmothers, that is). My favorites include recipes with moose, wild boar and milk fed lamb hearts. Galimberti does make sure to include suggestions for the worst offender ingredients (macadamia nuts for the ever elusive candelnuts in this recipe and my personal favorite, rabbit for iguana<!!>), but for example, this recipe called for 10 “small sweet chilies.” But in the picture, the only possibly comparable looking peppers we would have are chile de arbol. Which, for all I know, would be considered sweet in fiery hot Southeast Asia. Now I don’t know about you, but I am not sure even my husband would want 10 chiles de arbol in a recipe made for 6–let alone what it might to do my kids! And that is before the sambal is added to the soup! 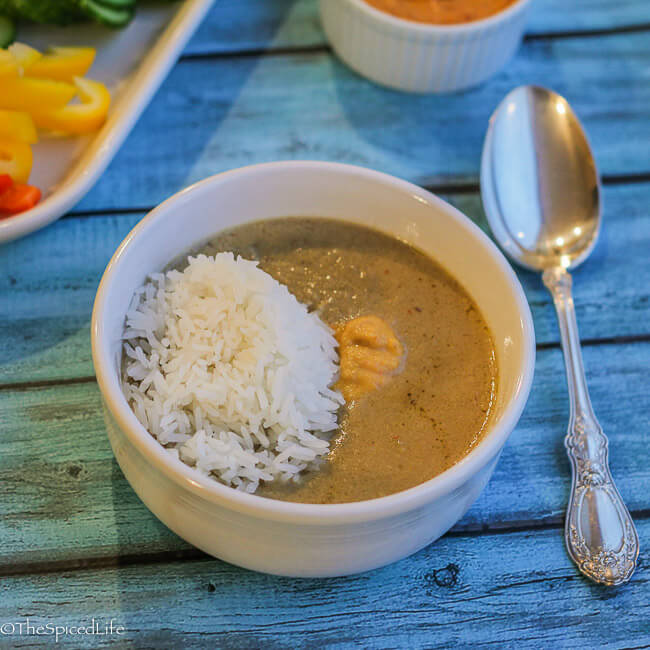 This shot is of Alex’s serving–where the sambal being added has no hot chile peppers added to it and is thus creamy looking instead of a more fiery red.

So I did what I always do when determined to try making various international dishes. I winged it–and you can too. I am going to share what I did below, in my adapted version, but with the caveat that the soup was too thick and rich for us (but the flavor was fantastic), so next time I would fiddle with the proportion of beef stock to coconut milk, and that is how I have written the recipe. It probably did not help that I was using predominantly Mae Ploy Coconut Milk

, which, in my experience, is the thickest and richest of the commonly available canned coconut milks. For this soup I would recommend something more like Thai Kitchen Organic Coconut Milk or Chaokoh Coconut Milk.

Some other changes I made include streamlining the cooking process–I pureed the paste for the soup raw and then cooked it like that, rather than cooking it in stages and cooking it separately before mixing it together and then cooking it again. For all of this pureeing, a blender should suffice since there is no galangal or lemongrass, but I of course used my wet-dry grinder. If you are not certain if your blender can handle the nuts (although macadamia nuts are fairly soft), mince them first is my best suggestion. I also chose to use the term sambal instead of “spice paste” as the book does, mostly because I am nearly certain it is a sambal. And for whatever it is worth, my whole family wished I had added mushrooms. See it is not just me! I did add the carrots because they were in the photo but not addressed in the recipe. 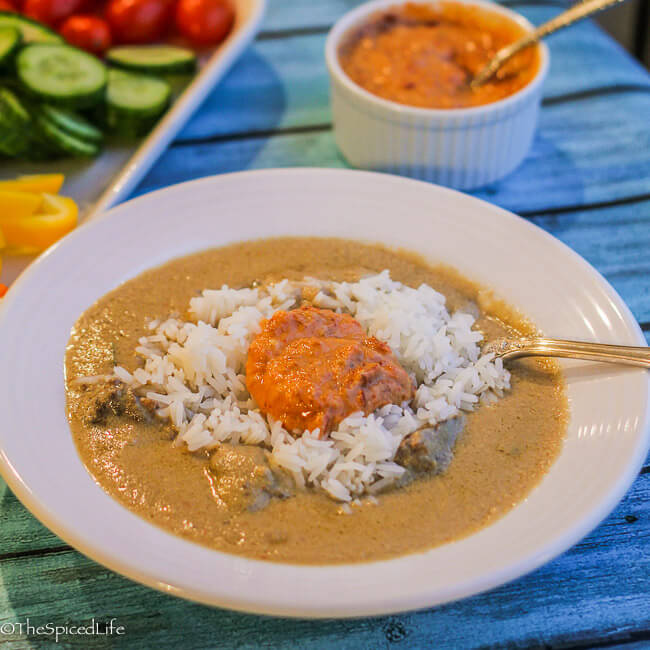 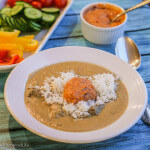