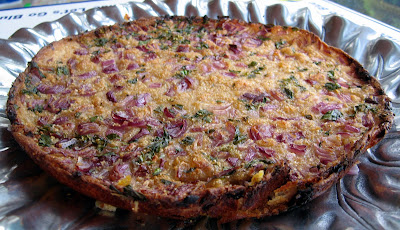 I almost forgot to tell you guys about this meal, which would have been nearly a sin. The “main” dish, the kibbe, were good, but the socca, the flatbread, stole the show. It was out of this world. It would be just plain wrong to not tell you about it. 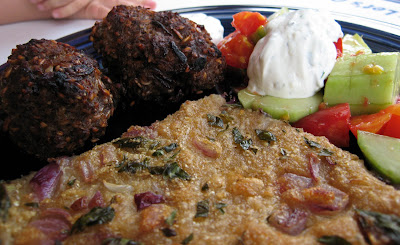 I actually started with the kibbe with garlic yogurt sauce, a recipe I had been meaning to make already. I have linked to the recipe, but truthfully I found broiling the ground beef and bulghur patties to make them too dry. I would grill them next time. But the flavor was very good and the yogurt sauce was excellent. Anyway, I wanted a flatbread to serve with it. Ironically I had been thinking of a soft, flexible flatbread, one to wrap the kibbe in. It turns out socca is not soft like that–and whoever compared it to a pancake is just plain wrong (I forget where I read that).

Socca is more like a super thin, crispy, and really flavorful foccacia (for lack of anything else to compare it to–really it is own thing)–one that you would not dip in anything because that would be redundant. It is traditionally made with chickpea flour, but Kerri Conan, a contributer to Mark Bittman’s blog (he originally wrote about socca in the NY Times) found that it worked just as well with other flours, including half whole wheat and half cornmeal. Since I cannot get chickpea flour on my side of town (but since I think this is the second time I have mentioned this you better believe I will be getting it on my next trip to Jungle Jim’s), I decided to try it with half white whole wheat flour and half yellow cornmeal. 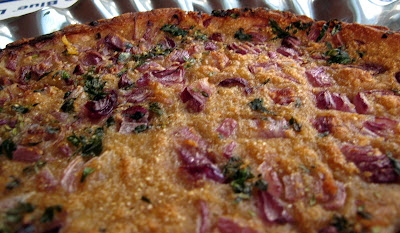 The bread is quite simple to make. You make a very simple batter, reminiscent of pancake batter only thinner and more simple still, that can sit and wait to be used for up to 12 hours. It consists of 1/2 cup whole wheat flour, 1/2 cup cornmeal, hefty pinch of sea salt (and black pepper according to Bittman, which I accidentally left out), and 1-3 cups (I used 1 1/2 cups) water whisked together (and whisked right before using if it has been sitting). Then, when you are about 45 minutes out, you preheat the oven to 450 F and pour enough olive oil into a well seasoned cast iron skillet to slosh–this part is weird I know. But I eyeballed it and was fine. You may be a little turned off by “enough olive oil to slosh”–but consider there is absolutely no fat source in the batter. When the oven is hot enough, add your herbs and aromatics to the pan (I used thyme, parsley and red onion; rosemary is highly recommended as well) and place it in the oven. When the onions sizzle, pour the batter into the pan–don’t worry about weird pooling of oil at this point. Put it back in the oven for 30-40 minutes. 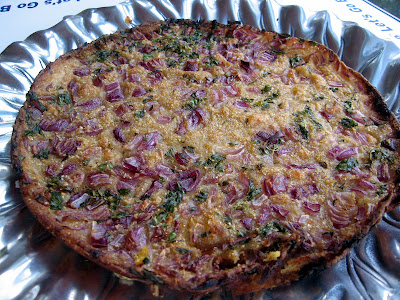 Bittman and Conan make it out to be the easiest bread in the world–and when it goes right it is. However, I did discover a few things from my own mistakes to help make it easier on you (I made 4 of these over 2 days, 2 each night). First, when they say use a well-seasoned pan, they mean truly a well seasoned plain cast iron pan. No matter how much oil I used or how hot I got the pan, the enameled cast iron Le Creuset skillet did not pass mustard–the socca stuck. Second, when they say get the oil hot enough to be aromatic but not smoking, I personally found this hard to judge–my onions got aromatic very fast. If you are using onions, I would say it is ready when the onions are sizzling, but not smoking. Both nights the plain cast iron socca lifted beautifully out of the pan. Both nights the Le Creuset socca stuck–and it stuck much worse the night I mis-estimated and poured the batter into too cool of oil. If you want to make 2 at once, as I did (and you have 2 plain cast iron pans), I recommend switching them from top to bottom halfway through. 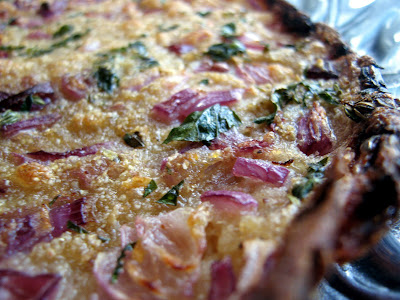 Run, do not walk, to get the ingredients for this bread. Since you can make it with whole wheat flour and cornmeal you have no excuse to not give it a try. 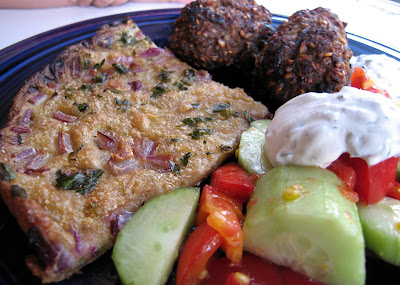 « Pancakes Every Morning!! Homemade Whole Grain Pancake Mix
Holy Moly What A Night… But What A Cookie, Too: Ginger Spice Crinkles »