Gobi Taka Tak, or Indian Sautéed Cauliflower with Peppers, Tomatoes and Yogurt is an easy, fast and delicious vegetable side dish for any curry, pilaf or main meat! This dish has proved to be a keeper, as I have made it many times since it was originally featured on this post. In November 2015 I decided to update the photos, but I have left some of the original pictures so you can understand why my kids originally fell in love with this dish made with the more colorful broccoflower! Affiliate links have been used in this post to link to items I am discussing. 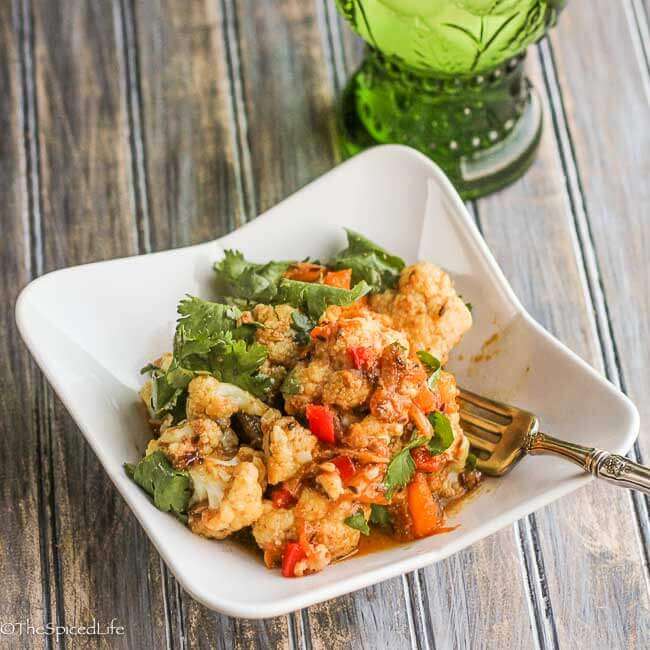 Now on the one hand I realize I have little to complain about (although don’t think I don’t work at it, with Alex especially). But on the other hand, given how much they like other white foods (bread, pasta, rice, yogurt), why I cannot get my kids to give potatoes, cauliflower and other white veggies more of a chance is beyond me. 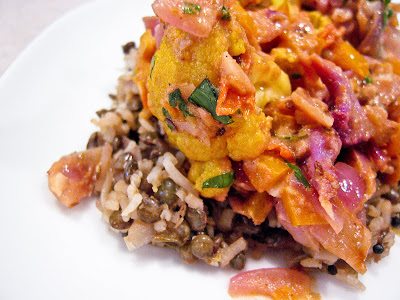 Original photo from August 2010 with broocoflower instead of cauliflower.

As many of you know I am in love with a Cincinnati grocery store called Jungle Jim’s–which I get to about once a month since I live out a ways. Once a month is not good odds for experimenting with produce, so I tend to stick to what is on my list when I walk into the store. However, the local Kroger’s has been renovated, and suddenly I have a produce smorgasbord available to me 7 minutes away. Nothing too exotic mind you, but great previously unavailable choices.

This is very exciting.

It has led to me trying broccoflower for the first time ever, and the rainbow 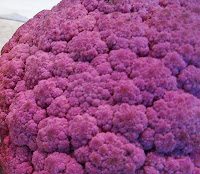 hued cauliflower (that’s essentially what it is) was a huge hit with my kids. I chose Gobi Taka Tak from Suvir Saran’s fantastic Indian Home Cooking: A Fresh Introduction to Indian Food, with More Than 150 Recipes

. After filling up on the dish in general, Alex actually picked the remaining broccoflower pieces out of the dish to make sure she ate every last bite. This opens up a very large world of possibilities for us, because I am always scrambling for Indian vegetable dishes–and Indian cuisine and cauliflower make a great match. 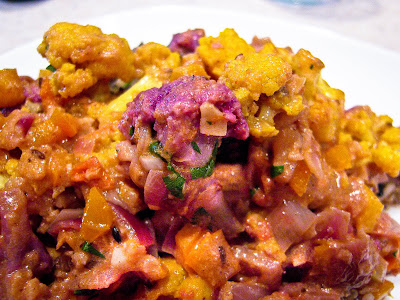 Original photo from August 2010 with broccoflower.

This first cauliflower (broccoflower) dish, Gobi Taka Tak, I served with a rice and lentil pilaf, heavy on the lentils. Now let me be clear, all things being equal I would happily serve it with a rice only pilaf. But you remember those heavenly whole spiced potatoes? I was serving them with this meal, so I wanted add more protein without adding too many more carbs. I think it worked out really well. If you love Indian potatoes as much as I love Indian potatoes, I really recommend this as a way to not serve 2 big carbs with your meal. 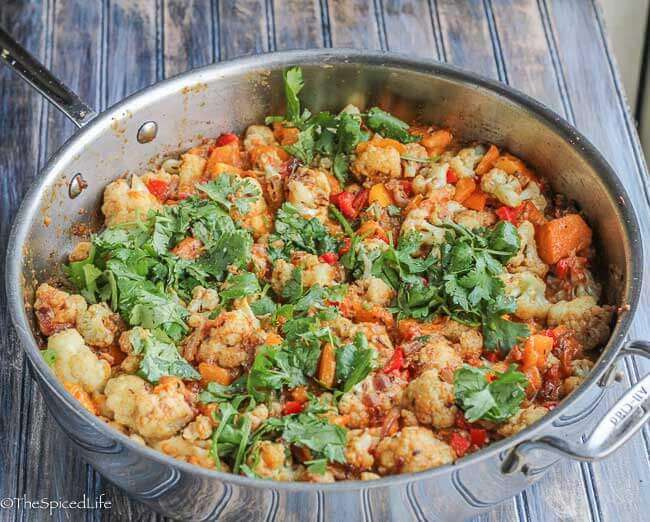 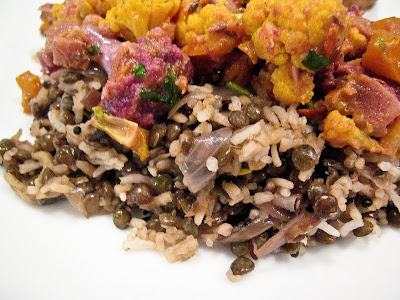 Print
*Note that this recipe make about double what you would need for the recipe above; cut in half for serving with the previous recipe.
Author: TheSpicedLife
Ingredients
Instructions
3.2.2925

A collage from November 2010 featuring the Gobi Taka Tak: