You are here: Home / cakes / Excessive Or Perfect? Or Both? Moravian Sugar Coffeecake Circa 1987 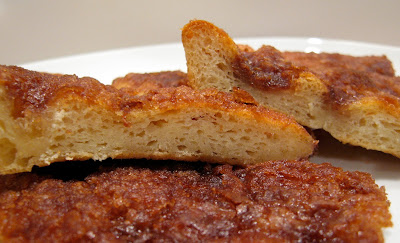 My local used bookstore had another one of those crazy sales. Different percentages off for different days, and 20% for all of Valentine’s Day Weekend on top of that. I am totally weak willed in the face of such deals on books. Helpless.

Since we’ve been sick, I only made it on 1 day–to 2 locations. And at one of them I found Gourmet’s Best Desserts (1987) and could not resist. I don’t often see Gourmet or Bon Appetit books at my used bookstores, and when I do they are inevitably pricier, which is where the 50% off coupon came in. The book is awesome–600 desserts from a time that is recent enough that there’s nothing shockingly weird but far enough back that you can definitely tell how times have changed. Take this Moravian Sugar Coffeecake, for example. It is made with lard, and has fat in the form of butter, lard and heavy cream. Whoa! I did a search at Epicurious, and found the current Gourmet Moravian Sugar Coffeecake –with no lard and no cream. 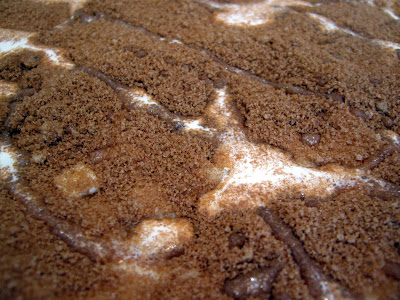 Now you’re probably wondering if the lard and cream are necessary, which is a fair question, but first let me get on my soapbox briefly about lard. It has less than half the cholesterol and nearly one third less saturated fat than butter (according to Rick Bayless–but I have read that it is healthier elsewhere as well). If you are a vegetarian or otherwise avoid pork, I get it. But as I have said before regarding chicken stock, if you eat animals in the first place, it is more respectful to make as much use of their bones, flesh and fat as you can. I hate how we have lost the use of lard in baked goods. It has so many applications and is not nearly the demon it has been made out to be. OK, rant over. 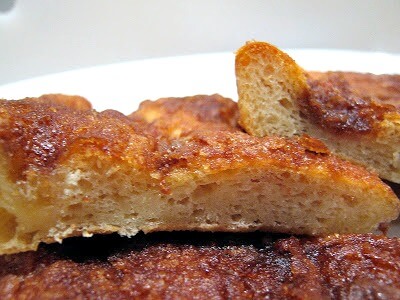 My answer to the question about lard and cream is that I am not sure. I generally prefer to have less of a more sumptuous dessert than try to make something lower in fat than it should be. However, I trust that Gourmet tested their replacement recipe and I do not think of them as the fat police by any stretch of the imagination. I would be unlikely to try it without the lard–instead, as per heath comments above, I would probably sub out some butter (in the dough, not on top of the dough) with lard. The cream though I am less certain about. I do wonder if the top might be crispier without the cream, and I like crispy. So I might leave the cream out next time, and if you do, please report back and tell me how it was! 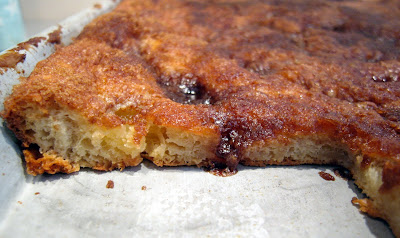 This dough was very easy to work with. After kneading it with my mixer for about 4 minutes, I switched to kneading by hand, and while I did need to add some flour (for stickiness), in general it was a soft, silky dough to knead. The recipe calls for rolling it out and then placing it into the pan. I rolled it out a bit, but also stretched and patted to get it to fit in the jelly roll nicely. For the last rising, it was hard to tell that it had risen much. After 45 minutes I just trusted that it had, and it puffed up beautifully in the oven. I definitely plan to make this again, although I might try it without the cream, in which case I will report back.

I am sending this cake over to Yeastspotting at Wild Yeast. Be sure to check it out every Monday. 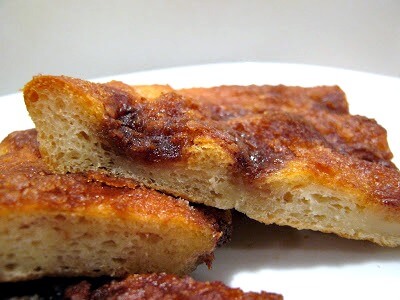 Begin by placing the potatoes and water in a medium sized saucepan. Bring to a boil, cover, and reduce heat to maintain a simmer. Boil for 15 minutes or until fork tender. Drain the potatoes, but be sure to reserve the cooking water.

Adjust an oven rack to the lower third of the oven (this is not in the original instructions, but when I first removed my cake it was very white and pasty on the bottom and I had to bake an additional 7 minutes on the bottom rack–it is my hope that baking in the lower third, instead of the middle rack, will correct this problem). Grease a jelly roll pan and set aside.

Place the potatoes in a food processor and process smooth. Add the 1/4 cup sugar, 1/2 cup of the reserved cooking water, lard, 3 tablespoons of unsalted butter and the salt and process again. Scrape this gooey mixture out into either a mixing bowl or the bowl of a stand mixer.

Test the remaining 1/4 cup cooking water and make sure it is no hotter than lukewarm (about 115 F). When it is cool enough, add the teaspoon of sugar and the yeast and stir. Set aside until it gets foamy.

When the yeast has proofed, add it with the egg to the potato mixture. Add also 1 cup of the flour and beat hard (by hand, medium speed with paddle by mixer) for 1 minute. After that, add the rest of the flour more slowly, by the half cup, at speed 2 on a mixer (or just mixing more gently by hand). When the dough starts to firm up, scrape off the paddle and switch to the dough hook. When the dough forms a ball, knead it on speed 2 for 4 minutes. Then lightly flour a work surface and dump the dough out. Sprinkle it with flour, adding flour as needed to prevent sticking, and knead by hand for another 5 minutes, until soft and stretchy.

Grease a deep container and place the ball of dough into it, rotating it to grease the dough as well. Cover with a damp towel and set aside in a warm place to rise until doubled, 60-90 minutes.

Preheat the oven to 400 F at the end of the first rising.

Punch the risen dough down gently. Lightly flour your work surface again and dump the dough out onto it. Lightly flour the dough and cover it, leaving it for 10 minutes. Then roll it out to 1/2 inch thick and the width and length of the jelly roll pan (I got it approximate and then finished the job in the pan, by gently pulling and patting the dough into place, being sure to get it even thickness).

Brush the melted salted butter over the dough–do not worry about using it all. Cover the pan with a damp towel. Set it aside to rise for 30-45 minutes, until risen and puffy–I uncovered it a few times, to make sure the towel was not sticking. Also, if at the end of the 45 minutes you are having trouble telling if it is risen, I would just assume that it has as long as it rose well earlier. 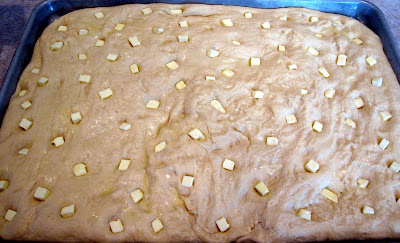 Using your thumb, press pockets into the dough–you want as many pockets as you have tiny pieces of butter. Place the butter in the pockets. Sprinkle the brown sugar mix over the dough–it will form a pretty thick layer. Drizzle the cream over it. 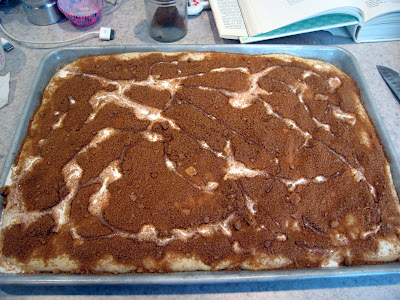 Place the pan in the oven and bake for 20 minutes, or until browned and bubbling. When you take it out, wait 5 minutes (on a cooling rack) and then peel the corner up to make sure the bottom has browned–if not, place it back into the oven on a lower rack still and bake another 5 minutes. (*This is all assuming your heating element is in the bottom of the oven, as is common with most electric ovens–I confess I am at a bit of a loss if your heating element is elsewhere.)

Wait for the cake to cool for 5 minutes on a cooling rack, and then slice away. I have had it both warm and at room temperature, and it is great both ways. If it is not all being eaten at once (mine was not since I was only baking for our family), when it is a bit cooler, gently remove it using a very large spatula–or 2– to a cooling rack. I found it easiest to slice with scissors, but a knife on a cutting board certainly works as well. Store it unwrapped in a large cake keeper or covered with foil. 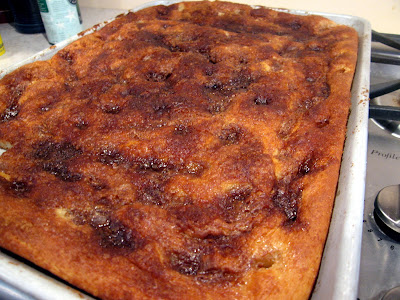 « "Muffins Are For People Who Don’t Have The ‘Nads To Order Cake For Breakfast": Triple Chocolate Muffins
An Extremely Tasty Lesson In Sauerbraten »