I do lead an interesting life, don’t I? That’s 3 surgeries since the start of this blog and 11 total over my lifetime. The good news–in addition to the fact that I got the infected appendix 12 hours before it ruptured (that’s an approximate guess by the doctor), is that having removed now 2 organs this calendar year, my deductible has been long since met and this one was free. 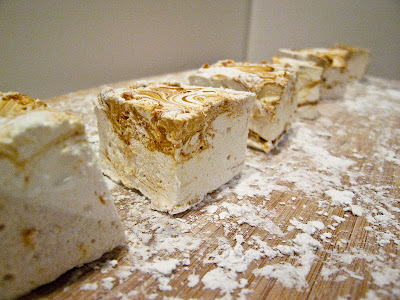 I am not 100% yet, but marshmallows don’t require much, so I made one more batch of those Dulce de Leche marshmallows I’ve been working on–and finally had a recipe I was happy with. Actually, I should say a process I was happy with, because after fiddling, it became clear the original recipe by Eileen Talanian in Marshmallows: Homemade Gourmet Treats

was perfect, but the pan needed to be prepped differently. When I made the marshmallows as written they stuck in horrible clumps. It was without a doubt the most delectable, gooey mess ever. Not serve-able, but rather the kind of mess you use a spoon to eat within the privacy of your own home. I added powdered sugar and corn starch to the pan prep, and voila! Perfect marshmallows. So much for all the other tweaking I tried.

These marshmallows are without a doubt the best eating marshmallow I have made. My dirty little secret is that except for melting in hot chocolate, I am not the biggest marshmallow fan in the world. Unlike with, say, chocolate chip cookies, I can usually stop after one. Not these. I barely ate them because every time I picked them up I picked up more than one. And more than 2–and at least once way more than that (gulp). You might think they would be too sweet, but nope, as long as you like dulce de leche in the first place, they are perfect. Within my family, some prefer the cappuccino marshmallows –but my mom, John and I all prefer these Dulce de Leche ones. As far as anyone told me, John’s class really liked them too–who else was going to eat all those experiments? 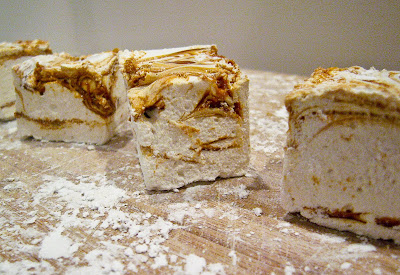 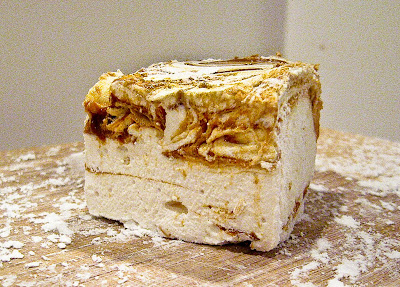 Affiliate links were used in this post to link to items I am discussing.