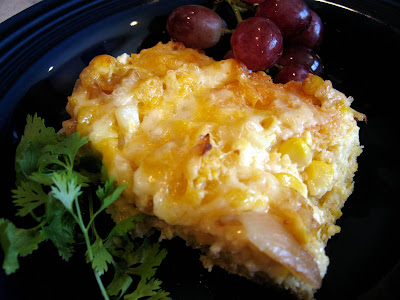 No matter what paroxysms of joy are brought on by various cornbreads over the next months (years) investigating The Cornbread Gospels, the book’s most useful contribution to my life will probably be the myriad of leftover cornbread recipes it provides. Especially because I am one of those cornbread fans who completely overindulges in an attempt to make sure not one single crumb is wasted. But now I can relax, knowing that the tasty cornbread will become a tasty something else the next day. 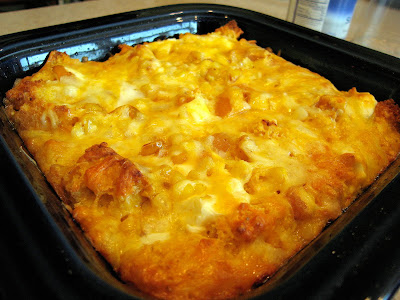 The following recipe was originally for a full pan of the Dairy Hollow House Skillet Cornbread, but of course I had a little less than a half pan, so I accordingly scaled it back. It also called for roasted chopped green chile peppers, but I still had the corn relish from the Sopa Tarasca, so I used it instead. 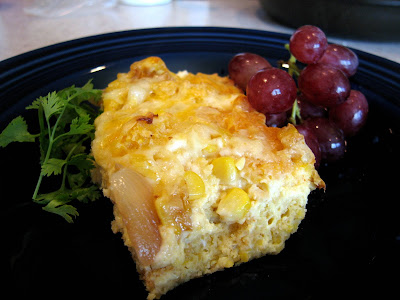 vegetable oil cooking spray
1/2 pan of cornbread, crumbled and left to dry overnight (1/2 of any recipe originally baked in a 10-12 inch skillet)
salt and pepper to taste
1 T – 1/4 cup vegetable of choice (here is where she likes chopped green chile peppers, esp roasted poblanos, but I used corn, peppers, garlic and onions)
2 oz cream cheese (or Neufchatel) (I did not measure–see directions)
3/4 cup mixed shredded cheddar and Monterey jack cheeses
4 large eggs
1/2 cup 2% milk
1/2 cup cream (I did not have enough milk–could use half and half or whole milk or whatever)
several dashes of hot sauce, we prefer Tapatio

Preheat the oven to 350 F. Spray an 8 or 9 inch square shallow baking dish.

Whisk together the eggs, cream and milk, and hot sauce. Pour it over the baking dish, soaking the top evenly (i.e., do not leave parts dry). You can do up to this point overnight but I did not.

Bake until the eggs are set and a little puffy–although Dragonwagon warns the puff will sink when the dish is pulled out of the oven. It took about 30 minutes. Do not overbake.

« To Try Tuesday Vol. 3
Family Recipes August Round Up »