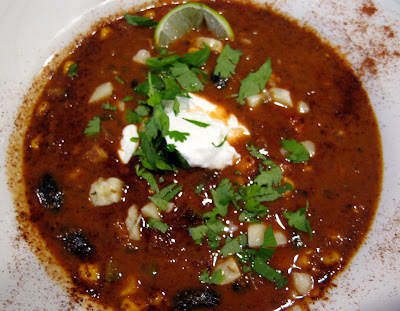 How awesome is it, for a foodie anyway, to be back in your own kitchen, cooking away? My friend has a fabulous kitchen, albeit probably designed by people who did not cook much and thus it has some quirky flaws, but in general it was gorgeous, spacious and “easy to operate” (I cooked for them one night). But it still wasn’t my kitchen, and it especially was not the kitchen that I just designed and am still in the honeymoon phase with.

So I was ecstatic to get back to cooking today. I was especially happy because although my friend is super healthy, we did eat out a bunch and plus travel food, especially coming home, is always just terrible. I usually walk into my house from vacation desperate for something meat free and veggie-licious. 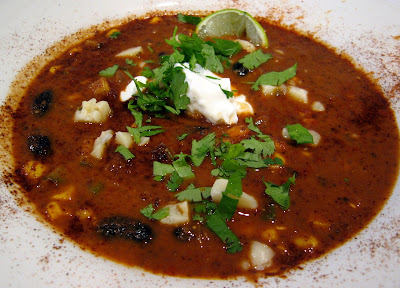 This soup (stew? dare I quote Rachel Ray and say stoup?) definitely qualifies. I decided to be brave and finally try my Scarlet Runner beans (a dried bean more in the lima bean family, I think anyway–growing up we always ate fresh lima beans and I have NO experience with cooking them dried). I looked for a link for you guys but could not find one–they look like large, dried black and red lima beans. Helpful, I know. I consulted the Rancho Gordo cookbook and found that they are good in chile sauces and complement garlic pretty well. In the meantime, I had found a recipe for Mexican Butter Bean Soup from a Moosewood cookbook. I decided to combine elements of both with what sounded good to me and came up with the following dish. 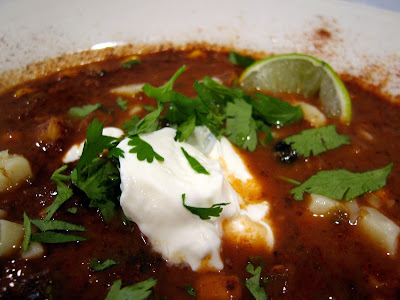 The dish, with one tiny exception, came out fantastically. The scarlet runners did not cook very evenly. This crop had some issues–there was a thread about it on the Cooking Light bulletin boards back when I bought them. However, just to confuse you further, Rancho Gordo is currently sold out of scarlet runners as well as all runner beans. I am pretty sure any dried runner bean purchased elsewhere should substitute. I also suspect but am not certain that any dried lima or butter bean should work as well. 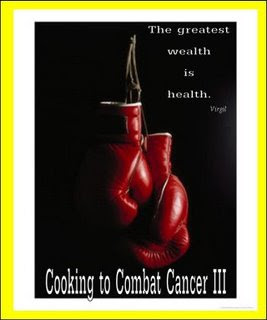 I am submitting this dish to Cooking To Combat Cancer III, an event hosted by Mele Cotte which celebrates the dishes and foods that help fight cancer. This soup is packed full of them: the beans contain phytochemicals which prevent genetic damage to cells and especially prevent prostate cancer; the garlic is shown to slow or prevent tumor growth; the tomatoes have lycopene, which fights cancer, once again especially prostate cancer; the capsaicin in the chile peppers may also fight cancer (do dried peppers count? I’m not sure); the possible avocado garnish is rich in glutathione, a powerful antioxidant, and they are a great source of potassium, and of course last but not least any meal or dish with loads of veggies helps fight cancers such as colo-rectal cancer… I encourage you to check out the link to the event, which links in turn to the articles where I found the information on the various ingredients in my soup. I know you guys probably think we eat copious quantities of Southwestern/Mexican bean soups around here, but I felt pretty happy with tonight’s dinner after realizing just how many good foods were in our dinner! 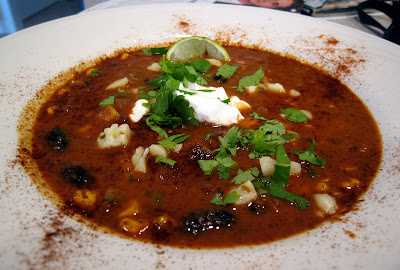 Dump the beans, with water, into a pot with the other ingredients. Pour enough water into the pot to cover by at least 2 inches (you may need to add more water as the beans cook to keep them covered by 2 inches). Bring to a brisk boil for 5 minutes and then partially cover pot and reduce the heat to maintain a very gentle simmer. When the beans are done, set aside in their pot liquor. 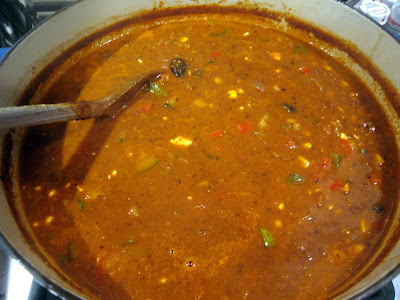 Possible garnishes:
diced avocado (I did not have but will get for tomorrow’s leftovers)
cilantro
diced farmer’s cheese
sour cream
lime wedges
cayenne or chipotle powder for heat

Heat a large soup pot or dutch oven over medium high heat. Add the oil and heat it to shimmering. Add the chopped onion and sprinkle some salt over it. Let it cook for about 10 minutes, stirring occasionally. Add the garlic and cook another 2-3 minutes. With a large spoon, scoop 2 big spoonfuls of the onions and garlic out into a blender. Add the zucchinis to the pot and resume cooking.

While the veggies cook, add the tomatoes to the blender. Then add 2 large ladles of cooked beans in their broth to that and finish with the spices. Blend until uniformly pureed.

In the meantime, add the sweet bell pepper to the cooking veggies. After about 3 minutes, add the chile-tomato puree back into the soup pot. “Rinse” the blender out with the chicken stock and add this to the pot as well. Bring to a boil. Add the beans, ladled in with broth but do not add all of the broth, rather just what comes in with the beans, and add the frozen corn. Return to a boil.

Reduce heat to very low, cover, and simmer for 20-30 minutes. Add cream cheese and honey to taste. Then add the lime juice. Check for seasoning. Allow to simmer gently but do not return to a boil. Serve with garnishes.