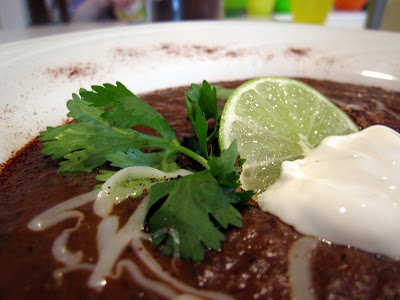 Don’t you love it when on-a-whim cookbook purchases turn out to be goldmines?

I was familiar with Rancho Gordo of course, having purchased their beans more than once. Steve Sando, the founder, has actually come around the Cooking Light Bulletin Board to answer questions, which is very cool. But I had never really planned to purchase his cookbook, at least not right now, because it is new and I figured I would never see it at a good price. But then The Good Cook had a sale, and that was that.

Folks, it is a treasure trove if you like beans. And I love beans. The posole was outstanding. As is this black bean soup. 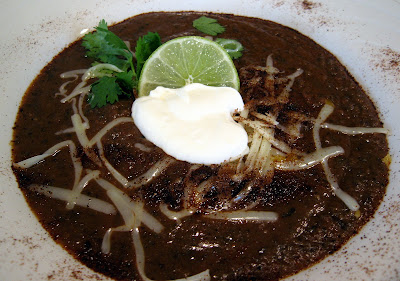 I was not too sure at first what I thought. This is definitely a soup that for me anyway needed the garnishes. But with the garnishes–YUM. The whole family devoured theirs. Alex insisted (and followed through) that I did not need to worry about her only eating cornbread (a risk anytime I serve bread with dinner) because she liked the soup (although she did have 2 slices of cornbread–that recipe will be posted later). And Sammy shockingly only ate half of her cornbread, as she slurped the soup in record time and demanded seconds. 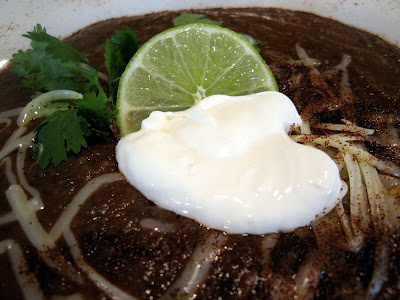 So we’re declaring it a winner–and a heck of a lot healthier (providing you cook the beans) than the black bean soups based in bacon and canned beans that I have made in the past! 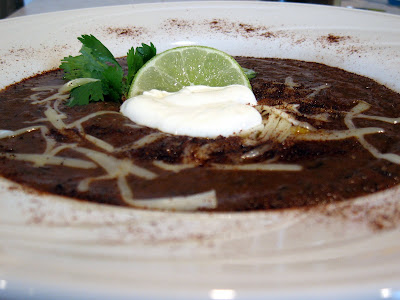 Put the garlic cloves on a sheet of foil and drizzle with olive oil. Wrap the foil around the cloves and roast them util they are browned, fragrant and soft (my cloves were fat so this took me about 30 minutes, and I turned the oven up to 450 F halfway through).

In the meantime, heat a large, heavy soup pot or dutch oven on medium high heat. Add the oil and heat to shimmering. Add the onions, carrots, bell pepper and jalapeno, if using. Cook, stirring occasionally, for 20 minutes. Sprinkle with salt to encourage caramelization. Keep a cup of water by the cooktop so you can splash some water into the pot if they start to scorch. You want serious caramelization–not dark mahogany, as in for Indian food, but definitely brown. At the end, add the cumin, oregano and chile powder and stir briefly to roast.

Add the beans with their broth and the chicken stock to the pot. Stir and bring to a boil. Rdeuce the heat to maintain a simmer and let simmer for 20 minutes, to allow the flavors to blend.

In the meantime, remove the garlic cloves and peel them. When the 20 minutes is up, add the fire roasted tomatoes to the pot. Simmer another 10 minutes. Then add the garlic to the pot. Using an immersion blender (or doing in batches in a traditional blender), blend the soup to smoothness. Taste for seasoning. I added a squirt of lime juice and some more cumin and some salt at this point.