You are here: Home / breakfast / Best Waffles Ever, A.K.A. Classic Buttermilk Waffles 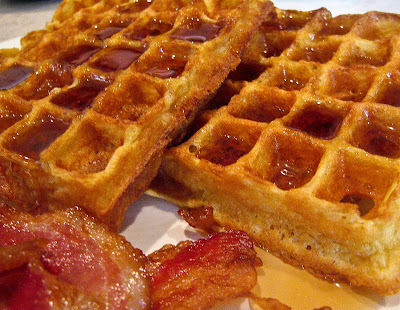 I bet you all thought my new waffle iron was gathering dust. Admit it, you did. That I had purchased a unitasker of the worst kind and after having played with it for a while, it was now sitting lonely and neglected somewhere.

Not so fast, my friend! (Any Lee Corso fans in the house?)

While it is true the waffle iron went unused for a week or 2 right around the Atlanta trip, it is getting tons of use–including daily use even. I finally broke down and tried a 10 grain Bob’s Red Mill waffle mix, and you know what? It is awesome. I can get waffles done in under 20 minutes, including measuring and mxiing of ingredients. And they are much healthier, too.

But this is not an ad for healthy waffle mixes, my friend. No this is a recipe for what we have decided are the Best Waffles Ever (and weekend material only as they are not the Healthiest Waffles Ever). Not as eggy as the All Clad Buttermilk Waffles, and just a tad more substantial but rich and buttery and crispy light with cake flour, these waffles are the end of my searching. I may tell myself to try another recipe, but foggy with sleep and starving–my general state in the morning–is not the time to muck about with new recipes. No it is a time for the Best Waffles Ever. 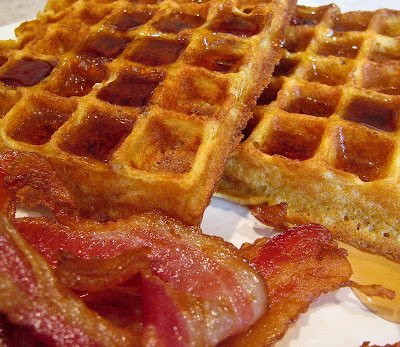 Place the eggs in the bowl of a stand mixer and begin beating with the whip attachment on medium speed. Increase it to high after a few moments. Leave it running while you measure the rest of the wet ingredients.

Preheat the waffle iron. Add the buttermilk, vanilla and butter to the eggs, reducing the mixing speed and then gradually increasing it to medium high. Once again leave it running while you measure the dry ingredients. You want the eggs thickened and increased in volume–this is basically a cheater’s shortcut to avoid whipping the egg whites separately. While it is not quite as good as whipping the egg whites separately, it comes pretty dark close and involves far less work.

Whisk together the flours, salt, baking powder, baking soda and sugar. Using a sieve, sift the flour mixture over the egg-buttermilk mixture. Dump whatever salt/sugar in that does not sift through. Mix the waffle batter just until smooth.

Bake the waffles according to your waffle iron’s directions.