You are here: Home / bar cookies / A Party Brownie Tray 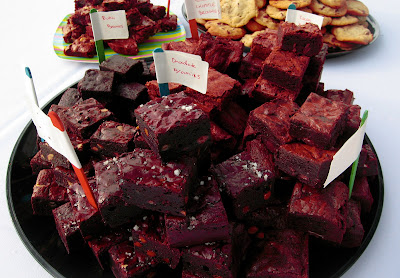 This year I decided I was going to make brownies for the pig roast. They were easier than individual cookies as I could make the entire pan and then freeze it before slicing. However, I got bored–which is kind of ironic because I personally tend to prefer plain brownies– and started making brownie variations. This turned out to be a brilliant idea, especially after my mom and I put together cute signs for the brownies. Next year I will do the same thing. It was such a nice presentation! 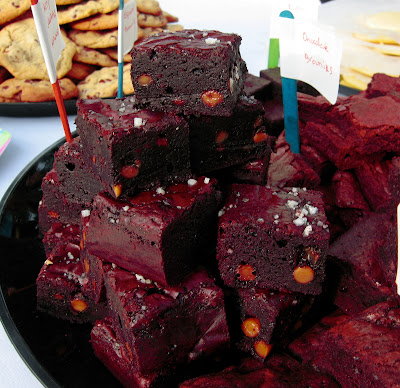 I am sure more ideas will occur to you–such as your favorite candy bar chopped, cream cheese swirled or peanut butter swirled. I am excited for next year already! If you want more brownie ideas, there have been several posted on this blog. I used 3 different cocoa powder recipes, within which I tried several different cocoa powders, natural and Dutched. For me personally (and yes I tried Valrhona) I still prefer the Scharffenberger and other natural cocoa powder based brownies, and I decided the best cocoa powder based brownie recipe I have tried is Alice Medrich’s. Thanks to my sister, who made the brownies with nuts, the brownies with chopped chocolate, and who suggested the fleur de sel with the caramel bits. 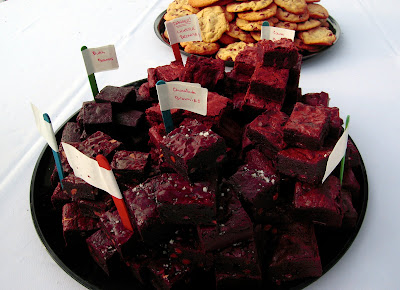 As with other pig roast photos, please excuse the pictures. The brownies turned out kinda red in them–I am not sure why, maybe that setting sun streaming into the picture. But I think you can get the idea of the tray nonetheless; I got loads of compliments on them.