You are here: Home / easily made vegetarian / A Fix Of Creamy Poblano Soup 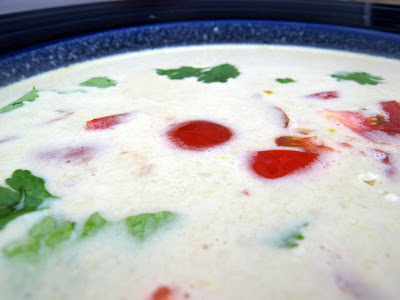 I made sopa de lima the other day because John was feeling under the weather and soup seemed right, even thought it was hot. Well since then, it seems like we have been craving more soup, as though we were addicts who had broken the addiction for summer–but once we had one bowl, we kept craving more. 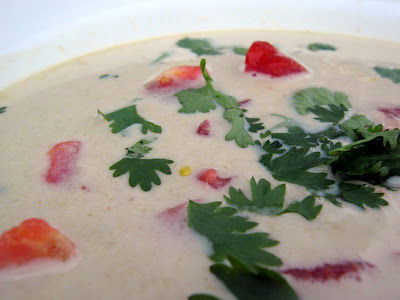 So I went to the farmers’ market and stocked up on some seasonal goodness and went home and created a new soup. It turned out too spicy for the girls–dang if poblanos are not one of the more unpredictable “mild” hot peppers out there–but John and I loved it. The cheese may seem like overkill, but I purposefully did not use all heavy cream in the soup to lower the fat and be able to use the tangy cheese. You would not think it would work so well, but it really does. Don’t skip roasting the peppers and using good tomatoes–it makes all the difference. 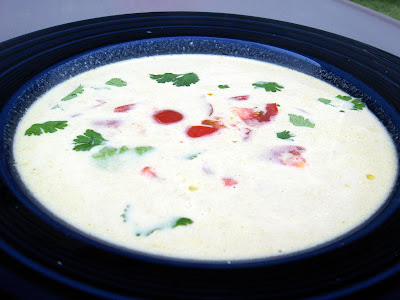 Heat the lard in a large, heavy pot over medium high heat. Add the onions, and cook until caramelized, at least 20 minutes. Sprinkle some salt over them while they cook. When they are caramelized, add the garlic and poblano peppers and cook an additional 2 minutes. Add the cumin and stir in, cooking for 1 minute. Put the tequila into a measuring cup (do not add straight from bottle) and turn the heat off and slowly and carefully add the tequila to deglaze the pot. Turn the heat back on and cook the alcohol off, scraping up any tasty bits stuck to the bottom of the pan. After 5 minutes or so, add the chicken stock and stir. Bring to a boil and then simmer for 20 minutes to blend flavors.

Using an immersion blender–or pureeing in batches–blend the soup until there are no chunks or pieces left (how smooth is up to you, I wanted it pretty smooth but I still used an immersion blender, which does not do a perfect job). While the soup is at a slow simmer, add the cream and stir. Add some of the soup to the half and half until the half and half is warm. Then add the half and half to the soup. I brought mine back to a slow simmer and it did not curdle. Add the honey and taste for salt and pepper. Serve, ladled into bowls over the cheese and corn. Add the tomatoes and cilantro on top.