You are here: Home / lentils / 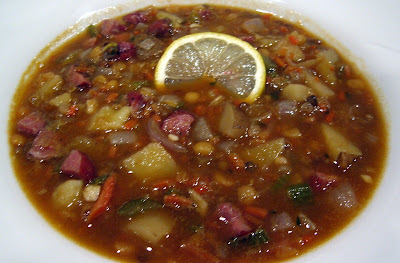 As I sit here typing 1 1/2 hours after dinner, I am still scrumptiously full. Full as in not at all too full, yet the kind of full where you had something hearty and filling that seeped into every nook and cranny of your tummy–and then thanks to a whopping protein component actually stayed there. None of that false fullness a starch-heavy meal brings on.

Speaking of tummies, I have Tummy Treasure to thank for this fabulous meal. As soon as I spotted Erica’s Chilly Day Lentil Soup I knew I would be making it. I love this kind of warming winter food. Served with a salad and fresh, hot bread, this is my ideal winter meal. 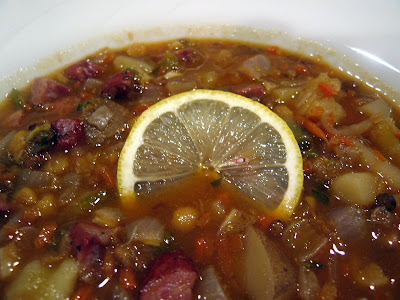 The recipe is linked above. My changes were as follows, some by choice, some by necessity:

I doubled the onion and garlic (you know that was choice)
I chopped up shredded carrots (all I had)
I added 1/4 cup of red lentils to thicken the soup and turn it into a stew
I used green lentils de puy instead of brown because I like them a lot
I used about a tablespoon of chopped fresh thyme
I increased the cumin a little and tripled the smoked paprika while reducing the black pepper
I used some imported Polish Kelbasa (was what I had in the freezer)
I increased the potatoes
I finished the soup with some freshly sqeezed lemon juice
After I began eating the soup, I decided it was crying out for peas and threw some frozen peas in–they were fabulous and I absolutely would do this again (they are not pictured as I threw them in after taking pictures) 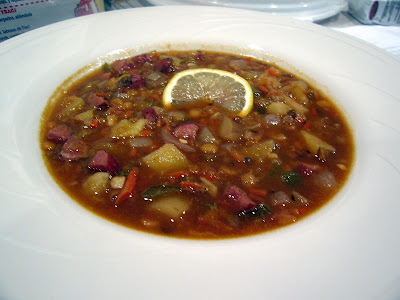 Whew! Seems like I changed it a lot. But really I don’t think I did except for the peas maybe. Mostly I just like things really strongly flavored, so spices and aromatics tend to be increased when I am cooking.